The former Peoria High star behind center is now expected to provide secondary depth at free safety when fall camp begins in August. 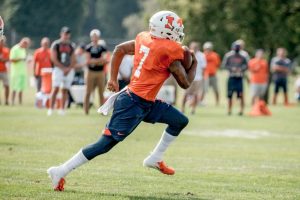 CHAMPAIGN, Ill. -- Starting this fall camp, Illinois will be embarking on another position change project involving a former quarterback.

In its updated 2021 roster, Coran Taylor, who was a three-star dual-threat prospect at quarterback and played in three games over two active seasons, is listed as a defensive back. It is expected Taylor will attempt to provide secondary depth at free safety when fall camp begins in August.

The move with Taylor coincided with the news Tuesday morning that eight Illini football players are no longer with the program following spring practices.

Taylor joins Isiaah Williams as Illini players who started the 2021 spring practice season at quarterback but will be transitioning to another position on the field before Illinois opens head coach Bret Bielema’s first season with a Aug. 28 home game against Nebraska (Noon, Fox).

Taylor, a 6-foot-2 and 200-pound athlete, played free safety as an underclassmen at Peoria High School before focusing on just quarterback in his final two prep seasons.

Taylor exploded on the scene to lead Peoria High to a 2016 Illinois Class 5A state championship as a junior, which included a 349-yard (215 passing, 134 rushing) and three-touchdown performance in the state title game at Memorial Stadium in Champaign. Taylor completed 86 of 161 passes for 1,546 yards and 18 touchdowns as a senior while rushing for 1,048 yards (9.7 yards per carry) and 14 touchdowns on his way to being honored with a 2016 Illinois Football Coaches Association first-team all-state selection. Taylor verbally committed to Lovie Smith’s program at Illinois in April 2017 and, at that time, was seen as a potential star athlete at the quarterback position in a spread option offense that the Illini were implementing at the time.

However, Taylor failed to move up the depth chart and find the playing field consistently until last season when in the second series of the home opener against Purdue on Oct. 31, the Illini found themselves down to their fourth-string quarterback. Brandon Peters, the Illini’s starting quarterback, suffered a positive COVID-19 test ruling him ineligible and contact tracing ruled out Williams as well. Matt Robinson suffered an ankle injury after the first series of the game against Boilermakers and Taylor, who had not taken any practice snaps with the first-team offense all week, finished 17-for-29 passing for 273 yards and two touchdowns but also accounted for four turnovers in a 31-24 loss to Purdue.

The move to free safety is expected to provide depth for the Illini as they expect to return a pair of fourth-year juniors (Jartavius Martin and Kerby Joseph) to that position. Illinois will now project to have 19 defensive backs on scholarship when fall camp opens in August but five of those players have only one year of eligibility remaining.