Hard to believe it's ALREADY that time of year!

We at IlliniGuys really dislike polls and bracket projections before the new year because it is...all...pure...speculation!  Did you really beat the #5 in the nation?  What makes YOU the 7th best team in the land?  What have you done to earn that 3-seed over the next team?

Once you get to mid-January, there are still lots of question marks but you begin to see the top teams get tested by some better squads as we witnessed in the past few days.  #1 Baylor enters Big 12 play and loses back to back home games.  10th ranked Michigan State gets stunned at home by Northwestern.  And so it goes.

So, we submit our first of many Bracketology projections for 2022.  We take teams and their resumes as they stand today; we don't attempt to project future results.

We think Auburn, Gonzaga, Arizona, and Baylor are the clear-cut top seeds as of tonight.  We think Illinois deserves no worse than a 3-seed with their undefeated, first place standing in the Big Ten and their #10 rank in the NET suggests that they should be considered among the top dozen teams in the nation.

We won't visit this on a weekly basis just yet, but they will be more frequent the closer we get to March. 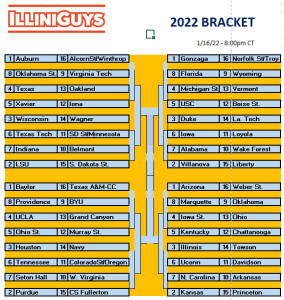