If there is one thing Illini fans learned this weekend, it's that their team's unusual season full of interruptions and injuries will be taken into account when the NCAA Tournament Selection Committee creates its field of 68 teams to determine a champion.

Illinois came in at #12 when the committee unveiled its early top 16 Saturday afternoon, meaning that - if the field were set today - the Illini would command the last #3 seed in the bracket.

The selection would indicate that the committee is going to factor in the five games All-American center and Big Ten preseason Player of the Year Kofi Cockburn missed due to an early season NCAA suspension for selling school-issued gear a month prior to the NIL rules coming into play and a concussion suffered in mid-January.  Sophomore guard Andre Curbelo, a preseason all-Big Ten pick and a candidate for the Bob Cousy Award as the nation's top point guard, missed more than two months while in concussion protocol.  The team also had to cancel a late December game vs. Florida A&M due to COVID-19 cases within the program and coach Brad Underwood had to cancel practice during Thanksgiving weekend because of a flu outbreak within the team.

Though #2 Auburn suffered an upset loss just hours later to Florida, we don't believe that changes the Tigers' status on the 1-line.  So we will leave the NCAA top 16 intact as we build this week's bracket.

Next 4 out - Rutgers, Virginia, Florida, Oklahoma 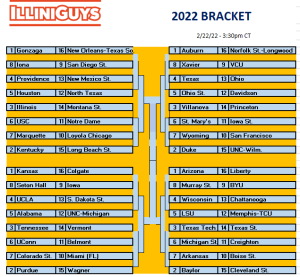