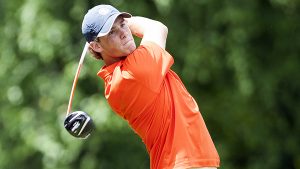 CHAMPAIGN, Ill. -- The men’s golf duo representing Belgium in the upcoming Summer Olympics will be two of the best players to ever play at Illinois.

Illini alums Thomas Pieters and Thomas Detry have qualified for the 2021 Olympic Games competition in Tokyo by being the two highest ranked players in their country.

The Olympic golf field is restricted to 60 players for each of the men’s and women’s competitions and the top-15 world-ranked players, according to the Official World Golf Rankings, are automatically eligible to play with a limit of four players from a given country. Beyond the top 15, players are eligible based on the world rankings, with a maximum of two eligible players from each country that does not already have two or more players among the top 15 in the world.

The final event that counted toward Olympic qualification was last week’s United States Open, which was won by Jon Rahm and allowed him to take over the No. 1 ranking in the world.

Illinois is one of seven Division I college programs to have multiple alumni golfers qualify for the 2021 Olympic Games. Illinois and Kent State are the only two schools with a pair of players representing the same country (Canada’s pair of Corey Connors and Mackenzie Hughes both attended KSU) in the 60-player field.

“There’s no doubt it’s a huge deal for them and a huge deal for us here at Illinois to have them in the Olympics,” Illinois men’s golf coach Mike Small said. “When you’re talking about only two from each country get in and then you’re talking about two world class players who get to represent their country in the Olympics and then they’ll be indirectly representing the Illini program. I couldn’t be happier for both of them.”

Detry was named 2015 Big Ten Golfer of the Year & was a two-time All-American as an Illini.. (Courtesy Illinois Athletics)

Detry, who was named the 2015 Big Ten Golfer of the Year and was a two-time All-America selection while at Illinois, currently is ranked No. 94 in the world. Detry’s 2021 season includes a second place finish at Porsche European Open in Germany and finishing tied for ninth in the Commercial Bank Qatar Masters back in March. Detry, 28, qualified for last week’s U.S. Open and missed the 36-hole cut by just one stroke after firing an even-par 71 in the first round at Torrey Pines in San Diego.

“Detry continues to see his game grow maturely and naturally over time and I’m excited to see that,” Small said. “This is just another step for him in his career as he continues to progress.”

Pieters, 29, will be making his second Olympic appearance after placing fourth in the 2016 event in Rio de Janeiro, Brazil while being in medal contention throughout all four days of competition. Pieters is the highest finishing player from the 2016 Olympics who qualified for the following competition five years later.

Pieters, who was named a 2013 first-team All-America selection, won the 2012 NCAA Division I Championship and took home the 2013 Big Ten Conference Championship as a member of the Illini golf team. Pieters is currently ranked 107th in the world. Since turning pro in 2013, Pieters’ career has been highlighted by four worldwide wins, most recently a victory in the 2019 D+D Real Czech Masters, and has earned over $7 million all-time on the European Tour.

Pieters and Detry aren’t unfamiliar with international competition as they won as a two-man partner team in the 2018 World Cup of Golf in Australia.

“Thomas (Pieters) has already had a career most people would dream of,” Small said. “I can tell you firsthand for sure that making this Olympics was a really big deal for both of them. They are both very proud of their home country and I can remember (Pieters) used to paint the Belgium flag on the golf ball he would use in competitions. It means a lot to them.”

The Illinois men’s golf program just wrapped up a 2021 season where they won their sixth consecutive Big Ten title and 11th of the last 12 years. The Illini also qualified for its seventh all-time appearance in the eight-team NCAA Championship match play bracket in just the last 11 years where that format has been adopted.

“The men’s golf program just finished another exceptional year for that program as Mike Small continues to be the greatest golf coach in the country,” Illinois athletics director Josh Whitman said last week.