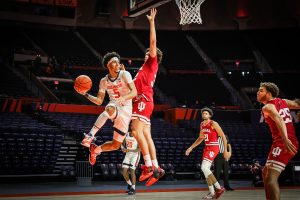 From his flashy passes, amazing handles, and retro afro and sideburns, freshman guard Andre Curbelo has astonished the Illinois fanbase. Star players Ayo Dosunmu and Kofi Cockburn are known entities as all-conference and All-American level players, but it’s Curbelo who may be the difference between a high finish in the Big Ten and a deep run in the NCAA tournament.

Curbelo hit campus this summer as a highly-skilled, 4-star recruit from Long Island Lutheran High School in New York, but the Illinois coaching staff firmly believed that he was undervalued.  “He’s got a unique gift,” says head coach Brad Underwood. “He’s got a vision, he’s got an understanding, and if you ever watch him do a ball handling routine it’s one of the coolest things ever.”

He’s also got a strong work ethic and good genes. His father, Joel Curbelo, played professional basketball for 18 years and represented Puerto Rico at the 1996 Olympics in Atlanta. Curbelo’s mother played handball on Puerto Rico’s national team. Curbelo started playing basketball at the age of four. At 15 - after leaving his family to move to the U.S. to play basketball, Curbelo won a gold medal for his home country at the Centrobasket Under-15 championship. He also won bronze for Puerto Rico in the FIBA Under-16 in 2017 and Under-17 championships in 2018.

In his first year being an Illini, Curbelo has shown a lot of potential. He put up 18 points and 7 rebounds in just his second game as a collegian against Chicago State, and followed that up with 12 points in a win at #10 Duke. The freshman guard brings instant energy coming off the bench and creates highlights with his crafty plays. A big key to Curbelo’s game is his passing. He has 60 assists total and averages 4.6 a game, ranking him 7th in assists in the Big Ten. 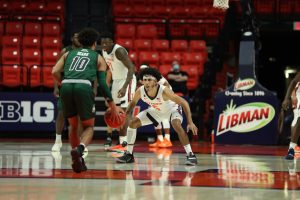 “I’d rather have 15 assists in a game for sure,” Curbelo says. “That’s what makes me happy. Every time I drive, I throw a lob or pass it to the corner for a three. That makes me feel better and it brings me more joy.”

Despite his amazing influence on the court, Curbelo would rather come off the bench.

"Every player that comes off the bench has a role," Curbelo says. "I think that's mine, just to come in and get everybody going and get stops on the defensive side. We're improved so much since day one. We're becoming that defensive team that Illinois is known for."

“He’s a difference-maker”, says IlliniGuys.com analyst Mike Cagley. “The game changes when ‘Belo is on the court. You see how he works to put the ball in the hands of scorers and it’s easy to understand why guys want to play with him. And he’s just scratching the surface.”

And that may be the most exciting part of all. With Dosunmu expected to head to the NBA for good this time come summer, the keys to the Illini will be handed to Curbelo, the man already known for his drives and dishes.