Saturday was a home football game, which traditionally means colleges all across the country are vying for position to bring in recruits. Illinois took a different approach Saturday, one I have not seen by a coaching staff in quite some time. For example, the Iowa Hawkeyes brought well over 20 potential recruits on campus in a 10-7 loss to state rival, the Iowa State Cyclones. Most of those were 2023 athletes. 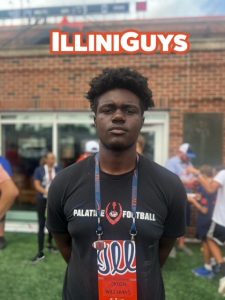 The Illini did the opposite; they reached out to thousands of high school coaches recently and started looking for members from 2024 and 2025. And all were from the state of Illinois only.

One major prospect was Jaylen Williams, a 6-foot-6 DL from Palatine, Illinois. Williams checks in at 265 pounds. Standing next to him on the sidelines, he looked every bit the part of the current Illini. "Man, this is great, I am so blessed to be here, so many people take this stuff for granted, not me. Every scholarship offer, every letter and phone I get means something to me, that's just how I was raised," Williams said.

The big fella is too young for the Illinois coaches to talk to him directly due to his age, but they, along with other big time programs, are fully aware he is going to be a stud at the next level. Williams said, "I don't have an offer yet from Illinois. Being from my home state, it would mean the world to me. Look around this place right now. It's great, the weight room is better than any school I have visited so far. You hear all the great things about this family bond. It's true here, and I'm here for it."

No one knows when the Illinois offer will come, but I can assure you it is right around the corner. How do I know? Because Williams already has offers from Missouri, Minnesota, Central Michigan, and Western Michigan. Because of his talents and size, Williams said that Missouri and Minnesota are trying to get him on campus soon. "With the effort Missouri is showing, I think they may be my next unofficial visit," he said.

When Williams walked out on the field yesterday, several reporters and other recruiting gurus immediately wanted to talk to him. We all came away impressed with a couple things: number one, his size, and, number two, what a gentleman. Williams is one that Bielema wants in his program. This will not be the last time Williams will be on campus.

"I know I will be back for another game this year, I'm not sure which one, but I love this environment. Watching them warmup has me ‘amped’,” Williams said with a smile.