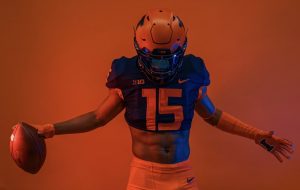 CHAMPAIGN, Ill. -- As Bret Bielema continues to transform Illinois’ defense into a permanent 3-4 look, he may have found the future prototype stand-up pass rusher on Independence Day.

Jared Badie, a three-star in-state prospect from Oswego, made his verbal pledge to Illinois official on the morning of July 4, giving Illinois a long, lean athlete on the outside to disrupt Big Ten Conference backfields for years to come.

Badie, a 6-foot-5 and 212-pound pass rusher, chose the Illini over scholarship offers from Arizona State, Iowa State, Tennessee, Minnesota, Cincinnati, Michigan State, Nebraska, Louisville, Purdue and Indiana. The Illini coaching staff got Beadie on the Champaign campus on the first weekend of June along with nine previously verbally committed prospects and that weekend experience eventually picked up the commitment of three-star Chicagoland wide receiver Eian Pugh as well.

After that official visit to Champaign, the Illini coaching staff had to survive Badie’s four remaining official visits to Minnesota, Tennessee and Michigan State the following weekends before getting to this critical verbal pledge. Badie is the second defensive player to commit to Bielema’s first full recruiting class as the Illini head coach and is the 13th overall verbal pledge of this 2022 recruiting class matching Illinois with Minnesota and Purdue for the most in the Western Division of the Big Ten. .

Badie’s commitment pushed Illinois into the Top 40 team rankings of the online recruiting services with some priority prospects still on its board as uncommitted targets.

The Illinois staff prioritized Badie in a package of keeping home the quartet of Chicagoland prospects that included Pugh from Fenwick High School in Oak Park and the Joliet Catholic High School combination of three-star running back Jordan Anderson and three-star linebacker Malachi Hood.

Illinois outside linebacker coach Kevin Kane, who was also immediately given the title of associate head coach in Bielema’s staff, was primarily responsible for the recruitment of Badie as the former defensive coordinator at Kansas and Northern Illinois has been given the task of finding stand-up pass rushers in a 3-4 scheme similar to the 1990s era when the Illini had future first-team All-America selections Darrick Brownlow and Simeon Rice leading Lou Tepper’s defense.

“(Badie) plays in an odd-front system in high school as a stand-up edge linebacker, but could put his hand down in college or reprise that position depending on the system he goes to,” 247Sports.com Allen Trieu wrote in his prospect evaluation for Badie. “(He is a ) fluid mover, pursues well and runs down plays. Has twitch and quickness off the ball as a pass rusher. Has to get stronger but also develop from a technical standpoint as a pass-rusher, but has upside due to frame and natural athletic gifts.”

Badie, who is a two-sport star at Oswego East High School after also consistently showcasing his talents on the basketball court and initially drew the attention of East head football coach Tyson LeBlanc by dunking a basketball as a eighth grader.

“Not only was he a big kid, he was athletic,” LeBlanc told the Chicago Tribune in Sept. 2020. “I took one look at his shoulders and saw Division I talent.”