Joseph becomes the first Illinois defensive back to be named as an All-Big Ten defensive selection in 13 years. 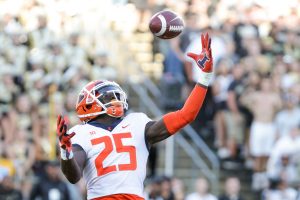 Illinois defensive back Kerby Joseph (25) intercepts the ball in the end zone at Purdue during the third quarter of an NCAA college football game, Saturday, Sept. 25, 2021 at Ross-Ade Stadium in West Lafayette, Ind./Nikos Frazier/Lafayette Journal & Courier

CHAMPAIGN, Ill. -- For the first time in 13 years, Illinois has a defensive back named as a first-team, all-conference selection.

Kerby Joseph was given the honor by the league’s voting media members as the defensive and special teams all-conference squad was announced.  This comes following his fourth season that included being the only player in the nation with at least five interceptions and three fumble recoveries during the regular season. The Orlando native was No. 1 graded defensive back in the nation by Pro Football Focus evaluators during this 2021 regular season that saw an Illinois defense see an improvement of 16 points per game and 101 yards per game from last season.

Joseph, Sydney Brown and Jartavius Martin were part of a safety trio that transformed an Illini secondary that was primarily coached by Illinois defensive coordinator Ryan Walters.

“I think it was the Virginia game when he had his first pick, it was a ‘wow’ play,” Walters said earlier this month. “It was a play that really from my vantage point, I was like, ‘I got to make sure he’s on the field all the time because I don’t know if we have anyone else or I’ve coached anyone else who can make that play in that circumstance, especially that far down the field.’ As we sort of transitioned to this style of defense, it was important to allow him to be in those moments more often than not, being able to overlap, use his instincts, use his ball skills, use his natural tracking ability to help us out on defense.”

The 2021 all-conference selections were revealed Tuesday morning as part of the Big Ten Network television special. Joseph, who finished the 2021 campaign with 57 tackles and tied for first in the nation in interceptions (5) in the 12-game regular season.

“When I first got here, he was all over the place. ‘What do I think about receiver? Coach, I can also play corner. Coach, I can play safety. Coach, I can play both spots,’” Walters said. “I was like, ‘Dude, you need to focus on one area. Once he embraced that and really took all of his focus and energy and attention on, ‘I need to learn how to play free safety,’ then he started to flourish because he started to get all that energy and all the knowledge that he wants to have into one thing.”

Joseph, who began the season as a reserve defensive back primarily on special teams, is now the fifth Illini safety in the last 50 years to earn All-Big Ten first-team honors joining Mike Gow (1973), Craig Swope (1983), Glenn Cobb (1988), and Marlon Primous (1989). Joseph was named a second-team All-Big Ten selection by the league coaches.

The All-Big Ten offensive selections will be announced on Wednesday.