After Illinois was able to grind a victory out against a depleted Michigan squad on Friday night, they will be taking on a top ten Purdue team in Champaign on Monday. With Michigan State getting upset at home versus Northwestern on Saturday, Illinois is in sole possession of the lead. When they take on Purdue, they have an opportunity to add another loss to a team that will undoubtedly be at the top of the pack alongside them.

Purdue is yet to have a signature win within the conference slate. They will look to this game against Illinois to bolster their chances at the conference title. Illinois, on the other hand, needs a signature win – period. This game is the Illini’s best opportunity since the Arizona game. It will mold how the college basketball world sees Illinois going into the next stretch.

These two teams were the top two favorites to win the B1G title according to the IlliniGuys staff. Overall, Purdue leads the rivalry 102-90. In Champaign, the Illini lead the series 59-36 and have a 2-game winning streak. Recently, the Illini have won the last 3 times these teams have met. Coach Brad Underwood is 3-2 in Purdue matchups.

In recognition of MLK Day, Illinois players will wear shirts during pre-game warm-ups featuring an image of Martin Luther King Jr. with the famed quotes "The time is always right to do what is right," on the front and "If you can't fly then run, if you can't run then walk, if you can't walk then crawl, but whatever you do, you have to keep moving forward," on the back.

Coach Underwood will wear MLK-themed shoes on the sideline, which will be autographed and auctioned afterward with all proceeds donated to the U of I's Bruce D. Nesbitt African American Cultural Center.

Question #1 - How does Illinois plan to guard Jaden Ivey?

Thus far into the season, it’s safe to say Illinois has not matched up with a player at the guard position like Jaden Ivey. The closest player stylistically was probably Notre Dame’s Blake Wesley. Ivey stands at 6’4” and 195 pounds. He’s about as explosive as it gets for a guard. While he had some efficiency issues last year and struggled particularly from deep, this season he has really grown as a player. 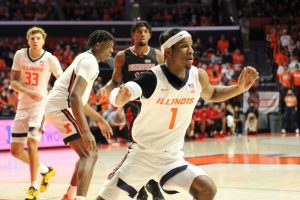 Ivey is currently shooting roughly 48% from the three and 50% from the field as a whole while averaging 16 points a game. Add to this 5 rebounds a game, and Illinois should expect to have their hands full trying to slow him down.

The first man who will draw the assignment will likely be senior guard Trent Frazier. Though not a complete size-match to Ivey, Frazier should try to get into his body to prevent him from getting a head of steam going to the bucket. While Ivey is shooting a high percentage from outside, it’s still preferable to force him to take outside jumpers than have him make easy drives to the rim – especially considering the weapons he has around him in the paint for easy dump offs and dunks. Frazier’s ability to play defense without fouling will be important in this case because Illinois will be counting on him to have a good game on the offensive side of the court.

In the minutes Frazier is off the court or in the event he gets in foul trouble, Illinois will most likely move Da’Monte Williams onto Ivey. Williams has a little bit more length and weight but so far into the season hasn’t guarded on the perimeter as often. In this matchup Illinois will likely have to resort to sending quick doubles and hard hedges to keep the ball out of Ivey’s hands and force other Purdue players to step up as playmakers. If Illinois can keep Ivey under his season averages and contain him in transition, they will have a much better chance of winning.

Question #2 - How will Illinois and Purdue match up stylistically?

When Illinois faced Purdue last year, it was one of the lower scoring games of the entire season. This time around Purdue has almost an identical roster, but with more experience. Illinois minus Curbelo, on the other hand, is missing four of their eight rotation players from last year creating a remarkably different team. While Illinois will have a different team, their approach is fairly balanced on both ends of the court – not too reliant on either side of the ball. 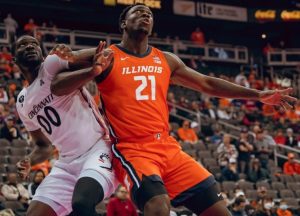 This Purdue team has the best offense in all of college basketball but has had times where they can struggle on the defensive end of the court. It may be a Purdue strategy to try to slow the pace of the game, as it would favor them with their level of offensive efficiency. This is especially true in the minutes that they play Zach Edey at center. At 7’4” he struggles to get up and down the court quickly and that can hinder them on defense. He is also one of the most efficient players offensively in college basketball, averaging over 15 points in slightly over 17 minutes per game.

Illinois should challenge this strategy by pushing pace and moving the ball around the perimeter to soften the defense around Kofi Cockburn. This is easier said than done, given possible conditioning obstacles after the COVID layoff. This may also be a reason why the team has looked sluggish against Nebraska and Michigan for the majority of those games.

In a matchup of arguably two of the most talented teams in college basketball, look for these two teams to feel each other out during the first half. Until Illinois can get better shot production on the perimeter, they will have some droughts offensively. This will likely be a low scoring game, with Purdue pushing past Illinois due to the strength of Purdue’s offense.