Column: Schools not getting their money's worth from their $95 million coaches 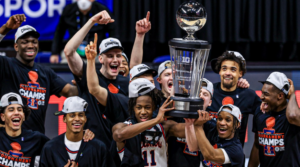 Illinois will take on the Ohio State Buckeyes in a battle of top 25 ranked teams. Illinois is coming off of a road victory against Michigan State where Illinois led wire to wire. Clearly, Illinois will be looking for a victory here as another loss will put them at a disadvantage in the conference title race.

Purdue and Wisconsin have one more matchup against each other – meaning that either the Boilers or Badgers will inevitably end with five or more losses. If Illinois wins the remainder of their games, they are guaranteed at least a tie against the prevailing team as Big 10 Champions.

In January of last season, then #14 Illinois lost against #21 Ohio State at the State Farm Center 87-81 in Champaign. This contributed to Illinois losing the Big 10 conference during the 2020-2021 season, when they missed out by one game due to conference win percentage. With all that’s on the line, Illinois needs to take this game seriously. Especially knowing that there is a player on the other team who takes all of his games against the Illini seriously in EJ Liddell.

EJ Liddell is the latest in a line of Ohio State stars that hailed from the state of Illinois. He joins such former Illinois high school basketball stars as Evan Turner, Sam Thompson, Lenzelle Smith Jr., and Keita Bates-Diop in battling the Illini with that extra bit of intensity one gets from playing against their home state's flagship university.

Question #1 - Who will win the Battle of the Bigs – Kofi Cockburn or EJ Liddell? 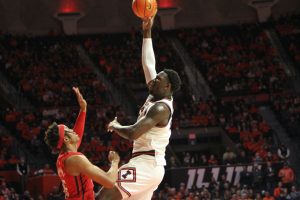 While listed as a power forward, most recognize that EJ Liddell plays a lot as an undersized five man. Against Illinois, he will have his work cut out for him as Kofi Cockburn is a solid 4 inches taller than him and is heavier by 45 pounds. Cockburn should look to take advantage of this size differential in the low post. Liddell will do his best to keep Cockburn from getting position deep in the post – a tough task for any player.

We may see Zed Key, Joey Brunk and even Kyle Young try to guard Kofi as long as they possibly can. Illinois will need to remain keenly aware of this dynamic as getting Liddell into foul trouble on the defensive end of the court could put pressure on Ohio State offensively. They struggle when Liddell is not on the court. If EJ guards Kofi or has to switch to guard Kofi, the Illini need to get the ball to their National Player of the Year candidate to get points and possibly fouls on Liddell every time the opportunity presents itself.

On the other end, it’s doubtful that Cockburn will spend much time guarding Liddell. Instead, he will probably spend a majority of his time guarding Zed Key, Joey Brunk or Kyle Young. Key is more of a true low post player, whereas Young is more of a spot up shooter. If Illinois isn’t able to establish much of an inside presence, they will be hard pressed to win without a strong outside shooting game.

It may be tough for Liddell to win conference player of the year with Jonathan Davis, Keegen Murray, and Cockburn rounding out the top three. That said, a win at Illinois and a head-to-head victory would go a long way toward making his case. If Cockburn isn’t a slight favorite right now, finishing the season with three wins after this game would be an asset. Either way, whoever wins this matchup will be a pivotal part in determining who prevails.

While it comes as a disappointment after his recent play, Ramses Melendez will miss this game due to an emergency appendectomy. This will put even more pressure on the small and power forward positions which have been areas where Illinois has had its challenges over the past two seasons. This means Da’Monte Williams and Jacob Grandison can’t have lulls on the offensive end despite the fact they likely will be required to guard Liddell for much of the game. 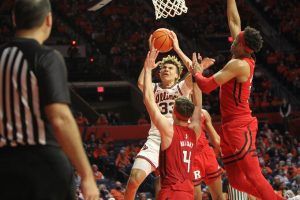 Grandison is arguably the reason why Illinois was able to come out of Michigan State with a victory. His hot shooting on the perimeter prevented Michigan State from sending double teams into the post. While Williams hasn’t done as good a job shooting during this season, his defensive impact versus Michigan State’s Malik Hall and Gabe Brown was clear during his 30 minutes of play. Those two players usually combine for 21 points per game, but instead finished with 5.

Another player who could step up in Melendez’s absence is Coleman Hawkins. After a red-hot start to the season, his play has tapered off and he’s been removed from the starting lineup. Luckily, he seems to be regaining his early confidence and his upside potential remains the highest of these three wings. Hawkins' effort as an offensive rebounder, a versatile defender, and a shot blocker means he could be positioned as either a 4 or a 5 depending on the player he is needed to guard. He hasn’t been a great three-point shooter, but he has shown a willingness to take three-point shots which is almost a necessity with Cockburn playing at the 5.

These players will need to do a good job as a unit guarding Liddell as well as freshman standout Malaki Branham, Ohio State’s two leading scorers.

This will be an upbeat game where Ohio State will be forced to trade threes for twos due to Illinois’ steady inside presence. Ultimately, this Ohio State team is going to be worn down, so it wouldn’t be surprising to see them have a rough outside shooting game due to tired legs. With the game being on the Illinois’ home court, it gives the Illini a slight edge.

I on the Illini - Iowa Hawkeyes vs Fighting Illini Football Preview (S2,Ep80)