The Illini travel to Ann Arbor for their final road game of the season and will put their 4-game winning streak against the Wolverines on the line. Coach Brad Underwood will be going after his 200th coaching victory as well. A win will put Coach Underwood's career record up to 200-91 with a victory. Trent Frazier is only four points away from moving to #5 on the Illinois all-time leading scorer list passing up Brian Cook 1999-2003. Depending upon the depth of the Illini B1G and NCAA tourney runs, #4 Dee Brown (1812 points) and #3 Malcolm Hill (1846 points) are within Trent's range of passing. With a deep runs and consistent play, Frazier has a slim chance of passing #2 Kiwane Garris (1948 points).

After an exciting but disappointing loss to Ohio State on Thursday, Illinois will need a victory on Sunday to remain in the hunt for a Big 10 title. It won’t be easy. We know Michigan will be ready after the embarrassing loss they had to Illinois in Ann Arbor last year. Additionally, Michigan will be desperate for a win as their opportunities to enhance their tournament resume dwindle.

This Michigan team has talent. They will welcome Terrance Williams and Moussa Diabate back from their one game suspensions which resulted from punches thrown during their handshake line with (or against) Wisconsin. Juwan Howard will be suspended until the end of the regular season so they will be coached by Phil Martelli.

Question #1 - Can Illinois get a bounce back game from Kofi Cockburn? 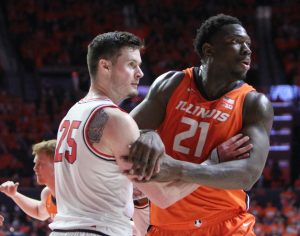 Kofi Cockburn had one of his worst performances of the entire season against Ohio State. He finished with twelve points and three rebounds in only 24 minutes due to fouling out. While a couple of the foul calls were questionable, Cockburn needs to understand that it will be significantly harder for Illinois to be a competitive team without him on the floor. He will be able to play aggressively in this game - if he doesn’t get any “dumb” fouls – like the foul he got right before half time in the Ohio State game.

This isn’t going to be an easy matchup for Cockburn as he’s going to be playing against Hunter Dickinson who’s been playing very well since returning from COVID which caused him to miss the Illinois/Michigan matchup earlier in the season in Champaign. Dickinson added a jumper between his Sophomore and Junior seasons, so Cockburn won’t be able to play off of him the way he can against traditional bigs.

Kofi has to walk an unpredictable path as he can't get into foul trouble because the team changes significantly when he is not available to play. While that is true, the calls of the referees cannot get into his head. Regardless of his foul situation, he has to play better defense. He can't be passive in fear of whistles. It's truly a balancing act for Kofi for the rest of the B1G schedule and even into the NCAA tournament. 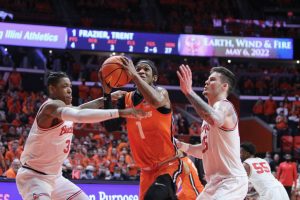 With the absence of Ayo Dosunmu during last season’s matchup in Ann Arbor, Illinois needed a big performance from Trent Frazier – and Frazier was up to the task. He finished with 22 points, four rebounds, and an assist while guarding Michigan’s primary ball handler.

Frazier has finished with 7, 11, 12, and 12 points in his last four games, respectively. That said, it just doesn’t feel like he had as much impact on the game compared to how he was playing earlier in the season.

Some of Frazier’s lack of aggression against Ohio State may have been due to the early fouls he picked up in the first half. Regardless, as a fifth-year senior, there won’t be many more opportunities to leave his mark on a game. As Curbelo continues to get more minutes at the point guard position, Frazier can be used off-ball and can hunt his own jumper since he won’t be relied on to create shots for his teammates. This will also allow him to have more energy on the defensive side where he can cause Michigan ball handlers issues getting into their sets.

Question #3 - Who can win the battle of the second units? 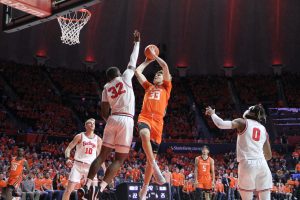 As the season has progressed, Illinois has not gotten the necessary production from Omar Payne at the center position. In a game like this, where the star for each team is a center, those who back them up will be pivotal to the outcome of the game. Payne cannot set foul per minute records. If he had been on the court longer versus Ohio State, maybe Kofi doesn't foul out.

With his performance against Ohio State in the closing minutes, Coleman Hawkins showed that he will provide an up-tempo option as a small ball five. Hawkins will be going up against Moussa Diabate who put up nine points and six rebounds earlier in the season when he had to match up against Cockburn for the majority of the time.

Hawkins will need to bring that same kind of energy in this matchup. His effort on the glass will be key. While his foul on EJ Liddell which caused him to foul out during the Ohio State game was a bad gamble, his energy on that end of the court really gave the Illini a boost and it’s good to see him getting his confidence back. If either Cockburn or Dickenson get into foul trouble, Hawkins and Diabate will discover their teams have a lot riding on their shoulders.

In this recently revived and increasingly intense rivalry, it’s always tough to predict the outcome. This is especially true when tournament hopes will be on the line. On the road against a fired-up team, Illinois will be facing tough odds. If Cockburn is able to win his matchup, Frazier has a good game, and role players can stretch the floor from the three, the game could go in Illinois favor. As it stands right now, however, Michigan seems to have the edge.