During this sixth game of their season, Illinois will take on the Notre Dame Fighting Irish. It’s just the fourth time these two teams have met since 1973, but the 42nd time they’ve met overall. While Illinois leads the series 27-15, Notre Dame has prevailed in the last three matchups – with two of those as wins over Underwood.

It may surprise some to know that both the Fighting Illini and the Fighting Irish are both among the top 15 winningest basketball programs in college basketball history. The Illini have 1839 wins, which ranks #15 and the Irish have 1918 victories which puts them at #8.

In games played in Champaign, the Illini are 12-2 but the Irish won the last game they played here in 2015 Big Ten/ACC Challenge, 84-79. This is the third time the two schools have met in the challenge with Notre Dame winning both. The other Irish victory was a 76-74 win in the 2018 Big Ten/ACC Challenge in South Bend, IN.

Will Curbelo or Grandison return and how will they be integrated back into the lineup? 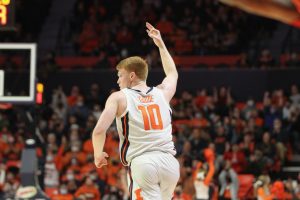 It’s safe to say that Andre Curbelo’s season has not started the way that he or anyone else would have hoped. He dealt with a concussion in the final exhibition game and hasn’t looked the same since. Whether it has been just the lingering effects of the concussion or that he has yet to build chemistry with the new look team, there is a lot of room for growth moving forward. If he does come back for this game, Illinois should be better positioned since they will not have to play Austin Hutcherson or Da’monte Williams at the point for significant minutes. Curbelo’s decision-making needs to be refined, but overall, he brings upside as a ball-handler that no one else on the roster can currently provide. Without him, the offense is sure to have droughts.

Jacob Grandison is slightly easier to replace than Curbelo given the make-up of the Illini roster. Regardless, it’s preferable that he be back. His ability to stretch the floor from the wing and as a potential small ball four gives the Illini the spacing they need around Kofi Cockburn. He also brings a steady veteran presence on both ends of the court. It’s unknown if he’ll be back as he’s dealing with an illness, but if he can’t, Coleman Hawkins will be playing a majority of the minutes at the power forward position and one of the freshmen will be thrust into the rotation. Luke Goode showed promise last game and has great awareness on the court. He’d be the one that looks to benefit the most if Grandison is out.

Can Illinois’ defensive effort bounce back?

Illinois was considered to be one of the premier defensive teams coming into the season. Prior to the last game, they were living up to that expectation. During the game against UT Rio Grande Valley (UTRGV), they struggled on the perimeter and allowed deep penetration into the lane. Whether that was due to personnel or lack of experience, hopefully it does not continue. When he returns, Curbelo will immediately provide better pressure on opposing point guards. This should prevent teams from getting as comfortable as UTRGV did. Without it, it will put a lot of pressure on Cockburn, Payne, and Hawkins to protect the rim without fouling.

Can Cockburn continue to play like arguably the best big man in the country? 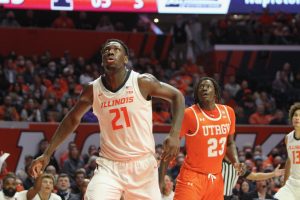 With so much uncertainty around the rest of the roster, Cockburn provides a much-needed level of stability for the Illini. As the team continues to build rapport and find their identity offensively, Cockburn is carrying the load for the team as a result of his ability to get easy buckets inside and bully defenders with his 285 pounds. This Notre Dame team doesn’t really have a true center to match up with Cockburn. Provided he’s able to get good entry passes and shooters are able to keep their defenders honest, Kofi should be able to contribute another 20 and 10 performance. Arguably his biggest improvement has been at the line, where he has struggled in the past. It’s not just the numbers that have gone up, he’s also bringing a new sense of confidence to the charity stripe.

This prediction is based on the assumption that Curbelo will be back in the line-up, Frazier will be out, Grandison will be a coin toss, and the Illinois role players continue to step up. Curbelo will bring a spark on both ends of the court and with the emergence of Alfonso Plummer Illinois’ guards will control the pace of the game. That, along with Cockburn’s presence as a rim protector and ability to get automatic buckets around the rim, should provide Illinois with what’s needed to overwhelm the Fighting Irish.