The Illini get to return to the friendly confines of the State Farm Center for today's game against Northwestern. It is the midpoint of a challenging five-game stretch that contains four B1G road games and is the Illini's chance to bounce back from a disappointing second half at Purdue. The Illini and the Wildcats meet for the second time in two weeks. The Illini come into this game with a seven-game winning streak against Northwestern. The games have been tight recently - with 8 of the last 9 games being decided by single digits.

At home, the Illini have won 10 of their last 11 B1G conference games. Illinois is 24-4 in its last 28 B1G games. This has contributed to their league leading 42-14 record versus B1G foes over the last three seasons.

Illinois is playing its 13th game on Super Bowl Sunday and has a home game for the 10th time. The Illini are 5-7 all-time when playing before the Super Bowl, but have dropped their last five, including a loss to Northwestern that started the five-game losing streak:

Illinois is coming off of one of their worst performances of the entire season in West Lafayette. Luckily, Purdue was upset on Thursday night against Michigan and Wisconsin was upset on Saturday against Rutgers. With that, Illinois is once again on top of the Big 10 standings and in control of their own destiny.

With the regular season winding down, the Illini will need to win all of their cupcakes, especially the ones at home. As they take on Northwestern at the State Farm Arena in Champaign today, they will have an opportunity to further add to their B1G lead. While Northwestern is not as bad as their record would suggest, a loss here would be a significant hit to Illinois’ seeding in the NCAA tournament. For the conference race, this matchup is a must win considering the games that follow.

Question #1 - How can Illinois get Trent Frazier going on the offensive end? 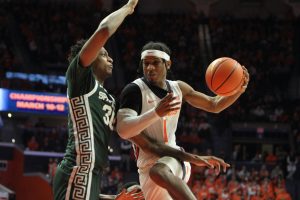 Against Purdue on Tuesday, Frazier was only able to get two points total – his lowest since a zero-point performance against Kansas State in late November. While he had a fantastic game against Indiana, three of his last four performances he’s really struggled to get it going offensively.

With Andre Curbelo’s return to the court, there should be an opportunity to slide Frazier off the ball and get him more open looks where he isn’t having to create his own shot. Given Illinois’ lack of depth due to injury through this point in the season, Frazier has had to play a little more than Coach Underwood probably would have liked, and that’s taken a toll on Frazier’s body.

The Illini offense has looked its best when he has been able to get downhill when teams aren't able to hedge on screens set by Kofi. Driving into the lane is another activity that can take a toll on Frazier's body as well.

With his activity guarding other teams’ best perimeter players on one end of the court, Illinois isn’t expecting to get 20 points a game from him. That said, low double digits are more in line with what he should be producing.

Question #2 - How does Illinois match up with Pete Nance? 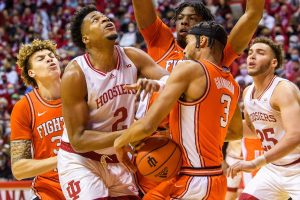 Against Illinois earlier in the season, Northwestern was able to keep the matchup close. In large part, this was due to the 21 points Pete Nance put on the board. At 6’10”, his shooting ability from outside makes him a challenge for Illinois’ roster. He also gets minutes as a stretch 5 to pull Kofi Cockburn away from the basket.

Nance can play some at the power forward position next to center Ryan Young which means Illinois will likely play a number of bodies on him to try to slow him down. Jacob Grandison, Coleman Hawkins, Luke Goode, or Ramses Melendez could all get minutes depending on the lineup on the court at the time. It’s unexpected they will fully be able to contain him.

If Northwestern plays Nance at the power forward position, Illinois will need to make him pay on the other end of the court by forcing him to guard on the perimeter. Barring an unexpectedly good performance by Nance, Illinois will probably have a much better plan on how to contain him this time around.

On the other hand, if Nance struggles to score, Northwestern will be reliant on their two guards, Boo Buie and Chase Audige, to carry the load offensively. In the minutes that Nance plays the five, Cockburn will need to be ready for a variety of pick and pop scenarios and high ball screen actions.

Illinois will be fired up after a disappointing performance in a high-profile matchup versus Purdue. That frustration will most likely be taken out on a less talented Northwestern team who was able to keep the last matchup close due to a Curbelo-less Illinois and a strong performance by Northwestern’s combo big, Pete Nance. With Curbelo back - and improved play from Illinois freshmen, they should cruise to an easy victory at home in Champaign.