Illinois is not fully in control of their own destiny in the conference title race. That said, they have a lot of control whether or not they will finish 14-6 or 15-5 in conference play, the latter of which would secure them the two seed in the Big 10 tournament. If an Illini win is coupled with a Nebraska victory over Wisconsin, the Illini could tie for a regular season B1G title.

The Illini have put together an impressive three years of results- particularly in B1G play under Coach Brad Underwood. They are the Big Ten's winningest team over the last three seasons with a 43-16 record in league play, and a 46-16 mark when including the conference tournament. Their 43 wins in conference play over the last three years is the winningest stretch in school history. Forty-three wins ties the seventh-winningest run in Big Ten history. The Illini have also won at least 13 Big Ten games in three straight seasons for the first time in program history, while going 28-6 in its last 34 games versus Big Ten opponents. This year's iteration of the Illini basketball team has won 21 games, marking the 35th 20-win season all-time and the first stretch of three-straight 20-win seasons for the program since 2009 through 2011.

Besides team objectives, this game has serious significance, as the Big 10 player of the year could be on the line. It could be a bit of hyperbole, but the national player of the year award might be on the line. Kofi Cockburn and Keegan Murray are both vying for both of these awards. While they don’t play the same position, whoever is able to dominate the opposition’s defense will likely come out on top between the two of them. A huge game late in the day of the last regular season game provides a fantastic platform to be seen by those voting on both awards.

This game could also go a long way in terms of seeding implications for the NCAA tournament. Illinois will likely secure a four seed with a victory – even if they have a loss in the Big 10 tournament.

How can Illinois match up against the Murray twins? 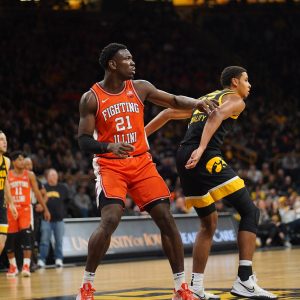 While Illinois and Iowa matched up in early December in Iowa City, these teams look markedly different at this point in the season. Illinois has Andre Curbelo back, giving them a different look. The Illini can truly go five out when Curbelo’s on the court, creating some interesting matchups. Both teams will have to sacrifice some on the defensive end in order to keep as potent of offense on the court as possible.

Coleman Hawkins will certainly have to guard either Chris or Keegan Murray. Who guards the remaining twin will be the question mark. Da’Monte Williams and Jacob Grandison will be at a disadvantage in terms of size. Melendez is still recovering from his surgery, but there still remains a possibility that he can play. He provides the best physical attributes, outside of Hawkins, to guard the other twin.

Regardless of which Illini player matches up against them, the Illini will need to make them work for their shots – as most of Iowa’s offense runs through the Murrays. The expectation is that while it will be difficult to fully stop them, making things tough on these two will force the other Iowa players out of their comfort zones.

How can Illinois’ senior backcourt bounce back on senior day?

Illinois didn’t have their best performance of the season against Penn State, and a lot of that had to do with the style of Nittany Lions’ play and their game plan. Iowa, on the other hand, is very much the opposite of Penn State and likes to push the tempo. This will lead to more opportunities for Illinois’ star studded backcourt of Alfonso Plummer, Trent Frazier and even Andre Curbelo who will come off the bench.

It will be up to these guards to do the bulk of the shot creation as well as feeding the ball into the main man, Kofi Cockburn. With this being the Illini’s last game in Champaign, it’s a safe bet they want to end on a high note. Iowa’s backcourt of Tony Perkins, Jordan Bohannon, Joe Toussaint will try their best to contain Illinois’ guards as well as provide some scoring to keep the pressure off of the Murrays. If Illinois can do a good job on these three, it will be very difficult for Iowa to keep pace.

In the final game of the regular season, Illinois looks to come out on top. With all that is on the line on an emotion filled day it’s hard to bet against the home team – especially with the rough last game against Penn State that will have Underwood lighting a fire under his players.