The 8-0 and #11 Arizona Wildcats come to the State Farm Center where they will take on the 7-2 Fighting Illini on Saturday at 4 pm CT on Fox.

The Wildcats have never won in Champaign, sporting an 0-3 record on the road against the Illini but are one of 8 undefeated teams left in the country. The Wildcats are the first ranked non-conference opponent to visit the State Farm Center in 10 years, since the Illini defeated #19 Gonzaga, 82-75, on December 3, 2011. The Wildcats are the highest ranked non-conference opponent to play at the St. Farm Center since #1 Wake Forest was routed by the #5 ranked Illini 91-73 on December 1, 2004.

The table is set for another Illini-Wildcat classic, though it's almost impossible for these two squads to equal the legendary 2005 clash that saw the Illini come back from a 75-60 deficit with four minutes to go to win a 90-89 triller in overtime to secure a trip to the Final Four.

Question #1 - How will Arizona’s post players fare against Cockburn? 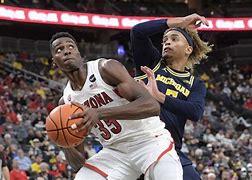 Arizona will be the first matchup Illinois will be playing against a top 25 opponent. Luckily for Illinois, they will be playing a home game. It will be a priority for Illinois to get the ball into the hands of their All-American center. In Illinois’ most recent game, Kofi Cockburn didn’t get many looks early on. As the game progressed, the Illini were able to lean on him for 17 points and 18 rebounds. Because of his strongly emerging ability to pass from the post Cockburn’s teammates have more reason to look for him.

Arizona is one of the few teams in the country that have the size to match up with Cockburn one-on-one. Their two players who get the majority of the minutes at the five are Christian Koloko and Oumar Ballo. Koloko is 7’1” and 235 pounds and Ballo is 7’0” and 265 pounds.  It will be interesting to see if Arizona doubles down on the post or if they force Cockburn to beat his man while not allowing easy kickouts for a three. If Arizona opts for the latter, and Cockburn is able to beat his man, then that could for Arizona out of their comfort zone. So far into the season, no team has been able to overtake Arizona’s post players, though they have not yet match up with a player of Cockburn’s ability.

Question #2 - Can Illinois guards continue to get good looks off the bounce?

It is very unlikely that Andre Curbelo will be back for the game against Arizona. Until he’s back on the court, Trent Frazier and Alfonso Plummer will have to continue with good play on both ends of the court. Many predicted Plummer to equal – or even do slightly better than - Adam Miller’s production from last year, but most did not see him having five straight games with 20 plus points. Frazier hasn’t played as well as many expected due to the ongoing effects of early season injuries. That said, he’s provided a steady influence in all games – whether on the defensive end or getting Illinois into their sets. This is the type of leadership that’s expected from a super senior, and he’s coming through.

This will be a pivotal game for the Illini guards to play well against a less experienced back court. While Illinois has a slight height disadvantage, they make up for it with craftiness and strength. If Arizona tries to press against Illinois, they will need to do a better job than they did in their last game getting into their press break and showing urgency. On the other hand, if Arizona is able to go on a run similar to what the Hawkeyes did against Illinois in the first half of the last game, Illinois most likely will not be able to recover this time around. Iowa is a solid team, but nowhere near the level of Arizona.

Question #3 - How does Illinois match up against Arizona’s Bennedict Mathurin? 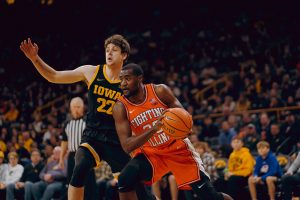 This far into the season, Illinois has done a good job guarding bigger wings on the perimeter. Recently, they held Keegan Murray to his season low (at the time) of 19 points and Ron Harper, Jr. to just five points. Both of those players were guarded by Coleman Hawkins, but it’s unclear if Hawkins will get the nod to guard Mathurin as well. Hawkins will be unable to guard him as the primary defender as he will most likely be tapped to guard Arizona’s 6’11”, 245-pound power forward Azuolas Tubelis. This means Illinois will have to downsize on Mathurin with either Jacob Grandison or Da’Monte Williams. As upper classmen, both will need to be up to the challenge in this high-profile matchup.

Mathurin brings legitimate NBA athleticism at 6’6. Although his outside shooting has regressed from 41.8% to 34.0% from the three, he’s still a good enough shooter that it precludes playing off of him. That, along with his impressive wingspan and elite athleticism makes him as tough of a matchup as Illinois has faced all season. Luckily for Illinois, he hasn’t played in a tough road game environment like this before due to COVID last year and early season scheduling. Overall, Arizona isn’t a great outside shooting team, so knowing who to help off of will be key as sometimes Mathurin demands double teams.

Arizona will be a tough matchup for Illinois so having this game at home will be an advantage. Illinois’ guard play should provide a scoring punch that Arizona has not yet seen this season. Arizona brings a larger lineup across the board. This will force Illinois into tougher looks offensively, so look for this to be a lower scoring game barring an outlier shooting performance by either team.