NASCAR's Johnson retiring, but with a catch

The Illini face a Rutgers team that leads their series with the Illini when they play at Piscataway 3-2. The Scarlet Knights come into this game with a two-game winning streak on their home court against the Illini. Rutgers owns the Big Ten's longest active winning streak at three games (tied with Iowa) and has won four of its last five. Illinois, meanwhile, has won five of its last six.

Of all teams in the Big 10, Rutgers has the highest degree of variance around how they play on any given night. Earlier in the season, they had a buzzer beater win over at that time #1 ranked Purdue. This shows how dangerous they can be. They followed that up with some abysmal losses midway through the conference slate. This included a 17-point loss to Penn State, a home loss against Maryland, and two close losses against Northwestern and Minnesota on the road.

Recently, they’ve shown what they can do when they are playing well, with wins over Michigan State, Ohio State, and Wisconsin. Against the Illini, they will be playing with their pride on the line as Illinois handed them a 35-point loss in Champaign in early December. Wednesday night, Illinois will be looking to pick up an extra win where many others have failed thus far into the season.

Question #1 - Can Kofi Cockburn get his rhythm against Cliff Omoruyi established early in the game? 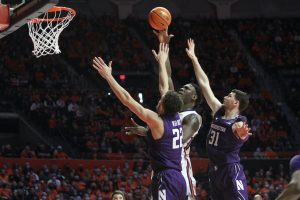 Over the past six games, Omoruyi has averaged 13.5 points per game along with 7.5 rebounds. His presence has been a huge factor in the Scarlet Knight’s recent play as he provides a rim protection and someone to counter any big for the opposing team. Getting Cockburn established early against Omoruyi will be pivotal as Illinois’ offense relies heavily on Cockburn’s interior game.

Omoruyi will be looking to stay out of the foul trouble he got into in the earlier part of the season. Against Cockburn, that will prove to be more problematic than most matchups. The same could be said for Cockburn against Omoruyi who has really stepped up to become one of the more physical matchups of all the bigs in the conference. He’s also added a solid midrange jumper which means Cockburn will have to defend him farther out on the perimeter.

Question #2 - Will we see continued success from RJ Melendez? 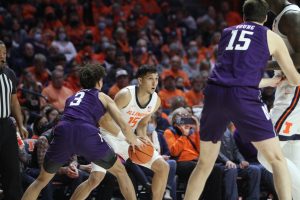 Against Northwestern on Sunday, Melendez had his career high 14 points along with 6 rebounds a block and 2 steals – all in only 17 minutes. Not bad for a rising freshman. The struggles of Jacob Grandison and Da’Monte Williams continues to present more opportunities at this position for Melendez to obtain playing time.

Melendez shows plenty to like without even looking at the stats sheet. His active hands can make him a really good option for Underwood to go to on the defensive end. It also helps on the glass as he does a fantastic job tracking rebounds which has often been an area where this Illinois team struggles outside of Cockburn.

With Melendez looking comfortable from all three levels on the offensive end, it just adds to his promise moving forward. While many would agree with this sentiment, many thought it might be difficult to crack the lineup given the veterans ahead of him, but Melendez has proven he’s up to the task. Against Rutgers he will at least need to show up defensively when placed on Ron Harper, Jr. a player who has had a lot of success against the Illini. Anything more than a good defensive performance out of Melendez will be icing on the cake.

In this Illinois/Rutgers game in Piscataway, nothing will come easily. In the end, Illinois’ talent should give them a slight advantage. With a hot shooting night from Illinois’ guards, the difference could be larger than this 3-point predicted spread, but with their recent inconsistency, it’s not something to count on. Hopefully, Illinois’ veteran leadership can produce a decisive victory to keep the Illini atop the B1G all alone.