This is the clash that was expected to determine the B1G championship when the season began. Purdue versus Illinois. The last game was a double overtime thriller in Champaign where the Illini came up short. This time the game is at Purdue and the Illini come in at 10-2 in conference with the Boilermakers at 9-3. This is the best start for the Illini in conference play since 2005 when the Illini were 12-0 at the same point in the season. 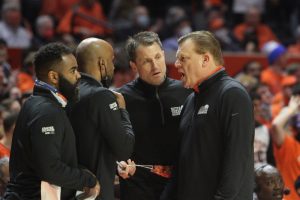 This is the Illini's second straight road game, continuing a stretch of four out of five away from home. The next three opponents are a combined 32-4 on their home court. If Illinois wins tonight, they will have won consecutive games at Mackey Arena for the first time since 2004 and 2005.

This will be a tough test but consider the fact that the Illini have won eight of their last nine road games and 13 of its last 15 B1G road games. In the last three years, the Illini have 18 B1G road wins, five more than Wisconsin who is second with 13. The Illini are 18-8 over this stretch, the only B1G team to be over .500 in league road games. This road excellence has contributed to the Illini being 24-3 in the last 27 games versus B1G opponents.

In the latest four game win streak, the Illinois defense has stepped up big time. Opponents have been held to an average of 58.8 points per game on a combined 36.2% shooting, including 21.7% from the three. They'll need every bit of that defense against Purdue's offensive juggernaut.

As great as the defense has been, the Illini offense has been key to victories as well. Illinois is 14-1 when scoring 70 points in regulation, having only lost to Arizona under these circumstances. The Illini are unbeaten when shooting better than its opponent (15-0) and when shooting at least 45% (12-0).

Illinois is coming off arguably their best week of their 2021-2022 season. After a blowout win versus Wisconsin, they were able to carry that momentum forward to win on the road against Indiana. Both of these games were kept close until half time, but Illinois was able to adjust and turn them into decisive victories.

Wednesday’s game against Purdue will be the biggest test of the season. Illinois has already played two top ten opponents – Arizona and Purdue – at home, but this is the first time they will be meeting up with one of them on the road. While most pundits thought Michigan would be in the title race, the other two that were consistently picked to be in the thick of things were Purdue and Illinois. Here we are in early February and these two will be playing for the lead in the Big 10 title race.

If Illinois is able to pull off the win, it will put them two full games ahead of Purdue. On the other hand, if Purdue wins, both teams will be 10-3, but Purdue will hold the tiebreaker as they will have two head-to-head victories. An Illini win will elevate them 8-1 in their last 9 games versus Top 10 teams and a win will allow them to record their tenth Top 10 win over the last three seasons, tying them with Baylor's nation leading ten Top 10 wins.

How can Illinois slow down this Purdue offense?

Currently, Purdue is ranked number one in adjusted offensive efficiency. At this point, there is no stopping an offense of Purdue’s caliber, so Illinois will be looking to try to slow them down – and not just figuratively speaking. They will literally want to slow down the pace of the game. Purdue’s offense, similar to Illinois, runs through the post in creating spacing around the three-point line. 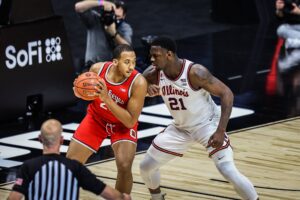 Most teams don’t have a capable interior defender, but Kofi Cockburn allows Illinois to play straight up man to man without the risk of leaving shooters open. This whole strategy revolves around Cockburn staying out of foul trouble, a task he was not able to fulfill in their last matchup – a game that went into double overtime with Cockburn playing about 8 minutes less than his per game average.

One strategy for the Illini could be to give some latitude to the Boilermaker’s Jaden Ivey. If Ivey is “on” there isn’t much on the Illini roster in terms of personnel to slow him down. At 6’4”, his combination of athleticism, shooting prowess from deep (this year, specifically), and finishing ability around the rim means Illinois is likely going to be placing Trent Frazier or Da’Monte Williams on him. Frazier has the quickness to guard him, but not the size - while Williams has the size but not the quickness.

If Ivey is efficiently beating whichever defender is assigned to him, there won’t be many tools left in the toolbox to throw at him. It’s not going to be worth it for the Illini to throw extra help defenders his way if it means leaving other three-point shooters open. Sasha Stefanovich, Mason Gillis, Isaiah Thompson, Eric Hunter Jr., Caleb Furst, and Ethan Morton are all shooting 40%+ from three-point land. This is a team that finds open shooters once the defense is broken down, because they are willing to make the extra pass.

Will Andre Curbelo mirror his performance of the last Purdue matchup? 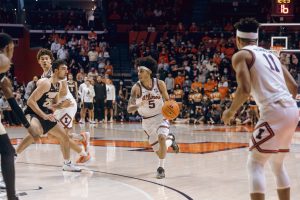 While many expected Curbelo to take the next step in his game after this season’s Purdue loss, unfortunately this has not been the case. He’s only played slightly over twelve minutes a game in the three games he’s played. He played well in those minutes against Wisconsin, but in his games versus Indiana and Maryland, he shot a combined two for ten from the field and had more turnovers than assists in those minutes. Luckily, Purdue is not a great defensive team.

Curbelo could play with one of Plummer or Frazier – or potentially with both of them in a three-guard lineup. His ability to get downhill and attack the rim is something that neither of Illinois’ starting guards can do consistently. This should add extra value as neither of Purdue’s Zach Edey or Trevion Williams are adept at guarding on the perimeter, so attacking them on the pick and roll could prove to be valuable in this matchup. The main thing Curbelo could bring for Illinois is transition opportunity – something Illinois has lacked in comparison to last year with Ayo Dosunmu. It wasn’t expected he’d be as good as Dosunmu in this respect, but so far this season it’s been something that has been sorely missed.

Here’s to hoping this prediction is wrong, but it’s unlikely it is. Often the difference in these games can be how role players play in the comfort of their own home court. With the expectation that Illinois will be on the receiving end of a few foul calls, be prepared to see one of Illinois’ key players on the sidelines. Thus, all the stars will have to align for Illinois to have a chance to pull off a victory.