The Fighting Illini are 7-2 in conference play and tied for first place in the B1G with Wisconsin. Wisconsin is the surprise team of the B1G and the Illini are the surprise team as well. No one expected a team with rotation players missing a combined 38 games to be in this position. The Illini have had nine different starting lineups, the most amongst high-major conference teams.

The status of Kofi Cockburn and Andre Curbelo has not been formally announced, but all the signals seem to indicate neither will be playing Saturday afternoon. Nonetheless, Illinois must find a way to win in their absence. This Northwestern team is second to last in the conference standings which goes to show the depth of the conference. They’ve been competitive in all of their games other than in West Lafayette versus Purdue. Since Northwestern’s win in East Lansing, they haven’t pulled off a victory, and Illinois is hoping to extend the Northwestern losing streak to four games.

How will Illinois spell Trent Frazier in Andre Curbelo’s absence? 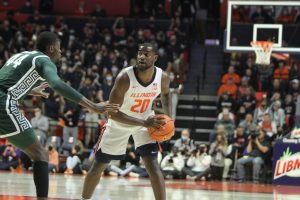 Without Curbelo, Illinois will again be forced to play unorthodox lineups so that Trent Frazier doesn’t have to play the entire game at the point position. This means another player has to pick up the remaining minutes. Da'Monte Williams has been relied upon even though it’s not his natural position at this point in his career. It hasn’t been as pretty on the offensive side of the court, but Illinois has made up for it with defensive intensity and ability to control the glass.

Williams is exceptional in this area and provides 5.4 rebounds a game – surprisingly high from someone who is only 6’3” (his listed height) and can get minutes in any of the one through four positions depending on personnel. Offensively he’s struggled this year, especially with shooting. While his field goal percentage is at only 27.9%, the coaching philosophy could be that he will start to trend closer to his career average of 36.8%. Sometimes it may not be the prettiest of ball, but he continues to add leadership that not many can provide.

Can Illinois continue to get solid minutes at the five in a hopefully short absence for Kofi Cockburn?

Illinois was lucky to come away with a victory against Michigan State in Kofi Cockburn’s absence. Omar Payne and Benjamin Bosmans-Verdonk combined for 15 points, six rebounds, one assist and two blocked shots. That may not be Cockburn-level production, but it kept the Spartan defense honest. That alone played a huge part in the victory.

Replicating that type of production will go a long way toward a victory against the Wildcats on Saturday. At the risk of stating the obvious, a big factor will be Payne and Bosmans-Verdonk staying out of foul trouble – especially Payne who has been notorious for foul trouble throughout the season.

Can Coleman Hawkins or Luke Goode get footing at the power forward position? 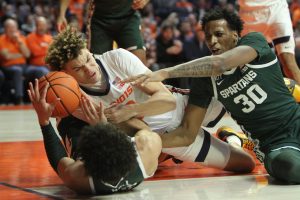 With the anticipated absence of Cockburn and Curbelo, it opens up 50 minutes of Illinois playing time to be distributed among other players. Two that can find a role are Coleman Hawkins and Luke Goode. While both provide shooting from the outside, Goode has recently been on a hot streak hitting four of eight from the three in his last three games.

Hawkins, on the other hand, has been in a bit of a slump. That may be due to him struggling to get his wind back after having been down with COVID. Hawkins provides a bit stronger defense and can also play as a stretch five, if needed, should Payne and Bosmans-Verdonk both struggle at the same time.

Even if Hawkins and Goode aren’t able to crack the rotation fully this year, it’s good to see glimpses of the talent they bring to the Illini moving forward.

As most B1G games go, road game wins are going to be few and far between – especially without two starters. That said, Illinois has had Northwestern’s number in the last couple of years. It’s safe to say that there will still be some lulls offensively, but this team seems to have found its stride on the defensive end. That coupled with veteran guard play will hopefully lead to a hard-fought victory for the Illini.