While everything remains fluid up until game time, at time of publication only Austin Hutcherson and Andre Curbelo have been definitively been ruled out for play in this game – both for non-COVID reasons. We're assuming that tonight, the Illini will be at "full strength" minus only the two players mentioned above.

The Illini all-time record in the series against the Minnesota Golden Gophers is a lopsided 126-68 advantage in favor of the Illini. As much as the Illini have dominated the series, the games on the road up in Minnesota have been nothing but a dog fight most seasons. The Golden Gophers have a 48-46 lead over the Illini when their battles occur in the land of 10,000 lakes. With the Illini coming off of a long layoff due to COVID, this is the classic trap game as the Gophers are not expected to put up a tough fight.

The Gophers are a surprising 10-1 with only a loss to Michigan State as a blemish on their record. They haven't played a high level of competition, but they have exceeded expectations for this team which were admittedly, pretty low. This team will find that things will get much more difficult now that the heart of the B1G schedule is in front of the Golden Gophers.

Due to a cancelation against Alcorn State, Minnesota also comes into this game with the potential for rust as they haven't played since their December 22nd victory over Green Bay. The Illini match that time off to the day having been inactive since December 22nd when they demolished the Missouri Tigers. The team that comes up to speed quickest will have a big advantage in tonight's game. 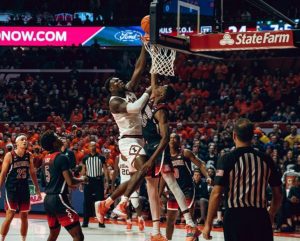 Illinois struggled during Kofi Cockburn’s first game back from his suspension on November 22nd. Since then, they’ve looked really good – even in their close loss to a top ten Arizona team. In their recent run of games, Cockburn has remained a dominant presence. Illinois should be looking to continue to get him involved and do so early on, as Minnesota doesn’t have an answer to his physicality. This Minnesota team has performed way above expectations, especially considering that they have a first-year coach and they have had to replace a number of players in the transfer portal.

With a shallow bench, Minnesota could be at an extreme disadvantage if Eric Curry – their main contributor in the post – finds himself in foul trouble. Should Curry be taken out of play, they will be relying heavily on Charlie Daniels – their other post player – who has never averaged more than 14 minutes per game during a college season. Moreover, neither have experience guarding a player of Cockburn’s stature let alone for 30 minutes or more in one game. As with many games before this, it will continue to be important to get the ball into Cockburn’s hands especially during a game where there is significant opportunity to exploit a weakness. 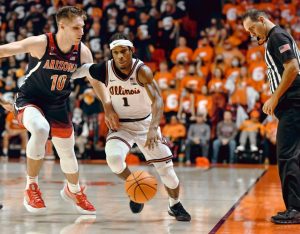 Trent Frazier missed time earlier this season due to injuries, but it’s clear he’s now hitting his stride. Even before he was shooting at a high level, he was adding a lot to the team through shot creation for others and his overall defensive presence. Not many guards in college basketball have the ability to lockdown either guard position effectively like Frazier. Depending on the matchup, he can take out other teams’ lead ball handler or he can chase shooters off screens. It comes down to what Underwood asks him to do during any individual game. His defense literally takes players out of the game from a scoring standpoint or makes them much less efficient than usual, essentially hamstringing an offense.

Alfonso Plummer, on the other hand, primarily contributes through his spark plug style offense. Many may have had doubts about him coming into the season, but his hot streak continues. And while he now averages 17 points a game on the season with 44.7% from the three, it’s actually his finishing at the rim that continues to be a welcome surprise. This forces defenders to play him honestly and creates open shots for him on the perimeter. It’s clear he’s gained the trust of teammates and coaching staff alike.

Both Frazier and Plummer need to continue to contribute at their current level of play in order for Illinois to compete for a Big 10 title – especially with Curbelo on the sidelines.

This game will come down to talent. Illinois – with an advantage in both physicality and depth on the bench – should prevail. That said, it’s a home game for Minnesota, and Illinois has had some COVID challenges so Illinois will need to take this game seriously. Minnesota has proven they can step up, having beaten a talented but inexperienced Michigan roster on Michigan’s home court.