In the third game of the season, Illinois will take on Marquette University, who comes into the game 2-0 having already beaten Southern Illinois University at Edwardsville and New Hampshire. This will be the first Illinois/Marquette matchup since 1993 and the first Illinois road game in front of a non-reduced capacity crowd since March 5, 2020 at Ohio State.

Illinois is without Preseason All-American and Preseason Big Ten Player of the Year Kofi Cockburn. He is serving the third game of a ridiculous three-game NCAA suspension to open the season after selling institutionally issued apparel and memorabilia in June. Cockburn's activities occurred before July 1, when the State of Illinois and the NCAA enacted new NIL legislation that would have made those sales permissible. 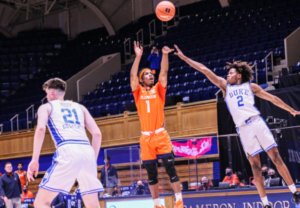 Illinois has one of the premier backcourts in all of college basketball this year. With Andre Curbelo manning the point and Trent Frazier at the shooting guard position, Illinois has a lot of speed on the perimeter on both ends of the court. Also getting minutes at the guard position will be Alfonso Plummer and Da’Monte Williams. This experienced group of Illinois guards will provide a massive advantage over Marquette and should slow their offense down in the half court.

Outside of Darryl Morsell (a defensive stopper in his own right and former Maryland nemesis), Marquette will be playing only freshman guards. Illinois can exploit this inexperience as the young guards will struggle on offense to get to a spot on the floor before their defender and will be forced to make one-on-one plays outside of their normal sets. The same thing will happen on defense. Offensively, Illinois should be able to get whatever shot they want as no one on the Marquette roster will likely be able keep up with Curbelo or Frazier.

Question #2 - Can Omar Payne get in rhythm before Kofi Cockburn’s return? 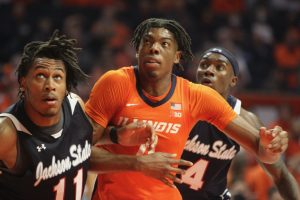 At this point in Kofi’s three-game suspension, Omar Payne has struggled to stay on the court. He’s shown flashes of good play - whether it be an emphatic finish on an alley oop or a block into the stands. Ultimately, however, he hasn’t had the impact that the fans and coaches are looking for. The coaches have reported that his practices have been impressive. They have to find a way for Payne to shine in games as well.

He’s been challenged by his inability to play defense without fouling around the rim. He won’t need to play well for Illinois to win this game, but it sure would make it easier. It would also go a long way toward building his confidence going forward. With Kofi returning to the line-up after this game, the All American will most likely get around 25-30 minutes per game, leaving very few minutes for Payne to build his game on.

Payne doesn't need to do anything flashy or out of the ordinary. He has to do what he does well - focus on the pick and roll game, rebound and  protect the rim. As long as he’s a factor on the glass and can stay on the court - by avoiding foolish or careless fouls, Illinois would love to see him make an impact in the middle. 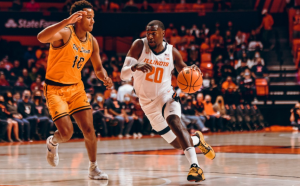 Nowadays, the winners at all levels of the sport rely on how well the team can shoot from deep. In this regard, Illinois is no different. Sure, there will be games that they can pull out even when having an off shooting night, but that’s the exception and not the rule. Or one could play Arkansas State and win by 39 while shooting 20% from the three point line.

With a guard like Andre Curbelo who has had his struggles from deep but can still slice a defense up with his dribble penetration, it’s essential to have good spacing around him so that he can leverage his ball handling skills to slash into the heart of the defense. Of the guys playing significant minutes, Jacob Grandison, Coleman Hawkins, Trent Frazier, Alfonso Plummer, and Da'Monte Williams - all have repeatedly demonstrated the ability to shoot well from deep.

While none of these five are considered to be star players, with good ball movement and a good offensive scheme, they just have to be able to hit their open looks at a reasonable clip. They've done it before and it's time to live up to their past performances. These players hitting outside shots will also lead to more open looks at the rim on drives and post ups. And when teams double team Kofi, the guards will get even more open looks.

Illinois will come in to this game with an overwhelming advantage in the backcourt. That, combined with the emerging play from Coleman Hawkins, and what is – hopefully – a bounce back (or just a bounce forward) game from Omar Payne, should be what Illinois needs to win by a sizeable margin. While Marquette may ultimately have a decent year, they will probably take some lumps early as their young guards gain experience. The Fighting Illini are just too much for the Golden Eagles - even with Kofi Cockburn and possibly Austin Hutcherson sitting in street clothes watching the game.