It's time for one of the premier rivalries in all of college basketball to take the center stage on Saturday to tip off a big weekend of NCAA basketball. Indiana vs Illinois. The Fighting Illini versus the Hoosiers. This next chapter will be written in the context of the Illini arriving at the Assembly Hall in Bloomington, IN as the leaders of the B1G.

This matchup will be the start of challenging 5 game stretch for the Illini with 4 of 5 coming on the road. To make matters even more challenging, the next 4 road opponents are a combined 43-5 at home. This trend runs headlong into the path of an Illini roadkill steamroller that has won 7 of its last 8 B1G road games and 12 of its last 14.

Kofi Cockburn had arguably the best performance of his college career. His footwork, coupled with amazing touch around the rim, made him impossible to guard whenever he beat the defender to his spot.

Question #1 - Can Illinois’ senior guards return to their prior selves? 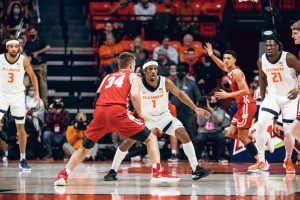 Not only were their points per game down during that span, but their shooting percentages were reduced as well. The lackluster offensive performance was offset by what they brought in defense, particularly Frazier. That said, this game features a matchup against a good defensive team on the road. Illinois will need to be able to count on good offensive performances from these senior leaders while maintaining their disciplined defense.

Indiana will be without their backup point guard, Rob Phinese for this matchup, forcing them to rely on Xavier Johnson on both ends of the court. Johnson is a big guard at 6’3” 200 pounds who tends to lose himself into hunting for his shot too often and shooting recklessly.

Despite this tendency, for the most part, he’s been significantly better than anyone else Indiana has to put out there.  During the minutes Johnson is resting, Indiana will look to Christian Lander to pick up his game as well. Since reclassifying and joining Indiana last year, he’s really struggled to adapt to the physicality of college basketball and has been challenged on the defensive end of the court.

Question #2 - How will Illinois matchup versus Race Thompson and Trayce Jackson-Davis? 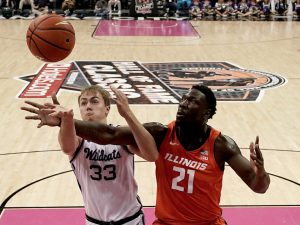 Indiana has one of the better post duos in the conference, and Illinois will have their hands full keeping them contained. During last year’s Illinois-Indiana matchup, Illinois deployed a number of different lineups to try to counter what Indiana was running. Lineups where Kofi Cockburn guarded Trayce Jackson-Davis ended up being fairly successful and were a big part of why Illinois was able to pull off an overtime victory despite Ayo Dosunmu playing most of the game with foul trouble and eventually fouling out.

Jackson-Davis’ lack of a consistent jump shot makes it easy to justify Cockburn sagging into the paint and helping as a shot blocker around the rim. How Illinois matches up with Race Thompson remains the biggest question mark.

Early on, Jacob Grandison or Da’Monte Williams will likely guard him while the other will be placed onto Miller Kopp. If neither of them is up to the task, Illinois could go in another direction entirely, bringing in Coleman Hawkins, Benjamin Bosmans-Verdonk, or even one of the freshmen off the bench.

If Coleman Hawkins is looking for a pathway leading to more playing time, Hawkins focusing on stopping Thompson when he is given the opportunity would be a great way to open the door to those desired additional minutes. He has to be ready to make a positive difference for the Illini the second he steps on to the court.

This game will likely be a low scoring defensive battle. Illinois is starting to get healthy which should allow them to throw plenty of bodies in to match Indiana’s intensity.

At this point in their college careers Illinois’ Cockburn has gotten the best of Indiana’s Jackson-Davis, so if it comes down to a close game history favors Cockburn. And, with Curbelo starting to get back into the mix, Illinois will have the talent edge, but being on the road will make for a tough fought win.