Illinois will be facing off against the Hoosiers after they had an improbable second half comeback against Michigan. The Hoosiers aren’t "formally" in the NCAA tournament, so a victory against Illinois would likely guarantee them in the field of 68. Illinois, on the other hand, is locked in to at least a four seed and with a victory on Friday, they could be placed as a three seed or even higher, depending on how far they advance throughout the conference tournament.

In their regular season matchup in Bloomington, Indiana, the Illini were able to come away with a 74-57 victory.

Question #1 - Can Kofi Cockburn continue to dominate Trayce Jackson-Davis in the battle of the bigs? 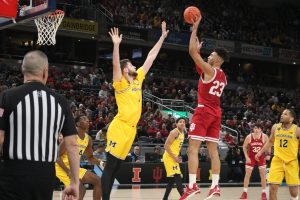 Since Kofi Cockburn and Trayce Jackson-Davis entered college three years ago, Indiana has yet to get a victory over the Fighting Illini. This is mostly due to the fact that, like Cockburn, Jackson-Davis relies a lot on physically bullying his opponents. Unfortunately for him, Cockburn isn’t very vulnerable to this style of play.

On the other end of the court, Cockburn is able to use his extra weight to force Jackson-Davis under the rim. This forces Jackson-Davis to play overly aggressive, and can often get him into foul trouble as he likes to swing for the fences and go for the highlight reel block.

Whoever wins this battle at the center position will likely come away with a victory. Look for each team to place a lot of emphasis on how to get these players looks. 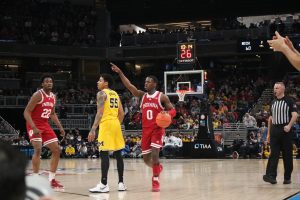 Over Indiana’s last five games, point guard Xavier Johnson has averaged 19.6 points, 6.5 assists, 3.6 rebounds, and 1.9 steals per game – all while shooting 87% from the free throw line and 45% from the three. He’s been instrumental in Indiana’s push for the tournament and slowing him down will be key if Illinois is to come away with a victory.

Trent Frazier, who once again looks to be an all-defensive player in the conference, will most likely draw the assignment. This will be an early post-season test for Frazier, as Johnson at 6’3” has a size advantage that could give Frazier issues – especially now that Johnson has found his rhythm from deep. Frazier had arguably one of his best games of the season at Indiana and he’s hoping to replicate that type of performance tomorrow in the Big 10 tournament.

When Frazier isn’t on the floor, Illinois will likely try to slide Da’Monte Williams or Andre Curbelo over to guard Johnson. Each will provide something different.  Williams will add strength, while Curbelo will use quickness to try to speed up Johnson and push him out of his comfort zone.

After an emotional come from behind victory against Michigan, Indiana will likely be running on fumes. Illinois, on the other hand, will come to the game rested and ready to secure a four seed – and possibly even a three seed – for the NCAA tournament. Indiana will try to slow this down and limit possessions, but Illinois’ offensive firepower will likely be too much for them in this conference tournament matchup.