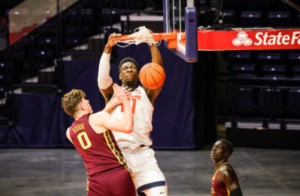 Consensus All-American center Kofi Cockburn has withdrawn his name from the NBA Draft consideration, one day before the deadline to do so.

The 7-foot native of Jamaica had hoped to parlay his immense improvement during his sophomore season at Illinois - during which he went from the Big Ten Rookie of the Year to a Big Ten first team all-conference performer and 2nd team All-American - into a slot in the upcoming NBA Draft.  But he failed to grab the attention of teams after weeks of training and workouts.

The next question for Illini fans is will Cockburn be in orange and blue this season?  The talented veteran made a surprising move last week and entered the transfer portal to weigh his options.  IlliniGuys insider Brad Sturdy has reported that the Illinois coaching staff has discussed the financial benefits that await a return to the Illini program through the newly created Name, Image, and Likeness program and will continue to have those conversations and meetings.

Having Cockburn return to the Illini for his junior season would solidify their spot as a top 15 nationally ranked team and make the team a strong contender for the Big Ten championship.  Cockburn also figures to be a top candidate for national Player of the Year honors.

More on this story in this space throughout the day.  For instant updates and the latest insider information, click the "Forums" tab at the top of the screen and join the conversation that's happening right now here on IlliniGuys.com