CHAMPAIGN -- For the third straight season, Illinois has gone to the Football Championship Subdivision level for offensive line help. 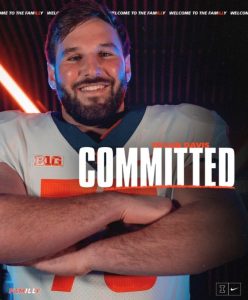 Illinois received a verbal pledge from Furman offensive tackle Dylan Davis after he started the final two games of the 2021 season — wins over VMI (37-31) and Samford (41-34) for a Paladins program that finished 6-5 overall. Davis, 6-foot-4 and 290 pounds, was honored with a selection for the 2021 Southern Conference All-Freshman team after he appeared in all 11 games and logging 194 snaps before eventually getting the starting nod in late November.

Last season Illinois welcomed Jack Badovinac as a graduate transfer from Colgate after the 6-foot-1 and 300-pounder started 33 games at the FCS level. He would get eight starts at guard in the 2021 slate for the Illini. Before the 2020 season, Illinois signed Blake Jersaty as a graduate transfer from Wofford but a preseason injury forced him to delay his FBS debut in Champaign until the 2021 season.

The difference with the signing of Badovinac and Jersaty as compared to Davis is the Furman transfer has three years of eligibility remaining and isn’t seen as an instant starter once he arrives for preseason camp in the summer.

Davis received a scholarship offer out of high school in 2019 from Lovie Smith’s staff via then-defensive line coach Austin Clark (who is the defensive line coach with the NFL’s Miami Dolphins) along with Iowa State and Army but elected to go with the FCS program in Greenville, South Carolina. Davis played at St. Stephen’s Episcopal School in Bradenton, Fla., which is the same high school as returning starters Chase Brown and Sydney Brown.

Illinois now has 15 scholarship offensive lineman for the upcoming 2022 season but Davis isn’t likely seen as an immediate plug-and-play option at either of the tackle spots due to returning starters Julian Pearl and Alex Palczewski to occupy the outside tackle spots this coming fall. However, Davis is seen as a developmental project that could add to tackle depth along with junior college transfers Isaiah Adams and Zy Crisler.