As an older Illini fan, my memory stretches over decades. While I'm no Loren Tate, I can still remember being a sophomore in high school feeling the sting of my favorite team losing to Pace Mannion and Utah in the NCAA tournament in 1983. Even after all these years, it still stinks thinking about that game (and many others).

I also used to worry about how many points the Illini won by and used to try to tell myself that one game bleeds into another. They really don't. Each game is its own entity with a life and course of its own. I just want the Illini win at the end of the game.

Tonight, the Illini produced what was needed - a "W" at the end of the game. Sure, they only had the lead for 25 seconds. I could care less; the Illini closed the deal on with a "W" on a night that almost no one could hit the broad side of a barn.

No one will remember this game for anything other than it being the night that the Illini squeezed out a victory. In large part because Kofi got his double-double, Coleman got some critical hustle plays, Curbelo made the offense much more effective (even with a few turnovers), and Plummer saved the offense in the second half.

It's much better for the Illini to be leaving the arena with a fresh piece of paper on which to write the narrative for the next NCAA game on Sunday. Going home ends the season in a disappointing fashion with the program thrust back into a miasma of crap that is a breeding ground of negativity for a segment of chronically frustrated fans. The Illini avoided that fate. Illinois has a shot to get to the Sweet Sixteen. Whether they can punch that ticket is a different conversation, but today is not the day for that discussion.

In any event, the "W" lasts forever, even if it was for only 25 seconds of the game. We can all agree to remember this game as one where the Illini overcame a 14-point deficit for the win. 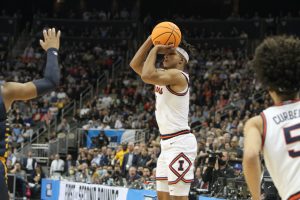 The Illini were down 40-29 with 18:04 left in the second half. The Mocs come out of halftime with a 33-29 lead and then scored 7 points to push the lead back to double digits. With good ball movement, the Illini cut the lead down to 40-33. At that point, within 30 seconds, Alfonso Plummer hit two three-point shots to bring the Illini down to a 1-point deficit, 40-39. For the first time in the game, the Illini seemed to actually believe they were in position to take control of the game.

After a score by the Mocs, Plummer came back with a long two to make it 42-41. Plummer was keeping the Illini in the game. As the Mocs stretched out the lead to 48-43, Plummer hit yet another three-pointer making the score 48-46. Again, his now-trusty three-point shot was keeping the fragile Illini offense rolling forward, or at least oozing forward, either way, the offense was still moving.

Plummer only scored one more time. It's an understatement to say that one last time was critical. He sank two free throws with 12 seconds to go to give the Illini it's 54-53 victory margin. Plummer wasn't a one-man gang, he wasn't the only reason that the Illini won, but he was one of the key catalysts in the second half that lit the Illini fire. It may not have burned white hot, but it burned long enough to win the game and go on to the Sunday game that provides the Illini a chance to get to the Sweet Sixteen. 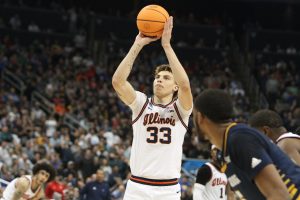 The last six seconds of the game were critical for the Illini to earn their way to the round of 32 on Sunday. Hawkins made an amazing block of a runner on the left hand of the lane by Malachi Smith who had gotten past Da'Monte Williams. Coleman Hawkins helped out on the play - going aggressively to stop the shot as opposed to hanging back and hoping to grab a rebound.

The shot came off of Hawkins hand and in the scramble, Smith retrieved the ball and managed to get up a second shot. The ball came off the board and into Coleman's hands to effectively end the game and put the Illini into the next round of the tournament. Effort matters. So does being very athletic and 6'10".

Hawkins also manages to surprise teams by using his speed to get from one end of the court to the other in rapid time. He timed up a couple of fantastic lobs that would be hard for anyone to stop, but when he hustles like that and at 6'10" gets his body up in the air, it's nearly impossible to prevent him from scoring. These plays helped the Illini outscore the Mocs 14-5 on fast break points and as we all witnessed, every point was critical last night.

As has been his recent habit, Hawkins contributed across the board to the Illini's win. He finished with 10 points on 5-8 shooting. Tonight, he didn't rely on this three-point shot, but instead used his height advantage to help the Illini on the inside versus the smaller Mocs. He finished 2nd on the team behind Kofi Cockburn's 13 rebounds with 8 of his own including two key offensive rebounds. Hawkins had two assists, no turnovers and the one massive block that was noted above.

Hawkins has turned his season around and is starting to round into the player that makes one believe that Coach Underwood's predictions of Coleman playing in the NBA may well come true. Once Hawkins adds some weight/strength along with making his outside shot more reliable, his size will make him a target of NBA GMs.

We have heard numerous times from Coach Underwood that defense and rebounding travel. Last night, the rebounding wasn't perfect, and fans wanted to see better free throw shooting travel with the Illini to Pittsburgh, as well. Last night, the rebounding and free throw shooting woes didn't matter as much for one reason. The Illini played crushingly effective defense. Even during a rough first half that featured too many Moc offensive rebounds, the Illini held their opponents to 37% shooting from the field.

The Illini only managed 29 points in the first half. If the Mocs had shot 45%, they'd have hit 2 or 3 more shots in the first half. Those extra shots would translate to 4 to 6 more points (let's not even talk three-point shots). A higher deficit would've reduced the Illini's defensive success of the second half into being a valiant but ultimately doomed effort. Instead, with the defensive effort of the first half, when the Illini went into "God mode defense" in the second half, it was enough to squeak out a win.

This uber-effective level of defense is what saved the Illini on a poor shooting night Friday night in Pittsburgh. Sunday is a new day. Let's hope the Illini are ready to go offensively and get a few of the rolls that they didn't get tonight. No matter what, the Illini must bring this version of their defense to the game on Sunday. It may be the only reason they make it to the Sweet 16 after a long absence from that level of NCAA tournament success. We all realize that 2005 seems like a lifetime ago.

Under the right circumstances, the Sweet 16 could be in store for the 2022 Illini. They can control their defensive effort, so make it a great one on Sunday, too.