Heat Checks and Hail Marys - Win When Its Expected 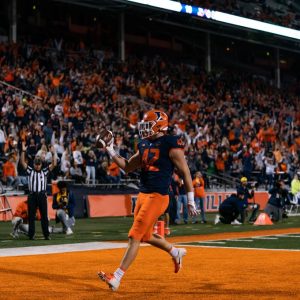 There's one way to tell if a team is worthy of being called a good team. As they go through the process of playing their scheduled games, do they beat the teams they're supposed to beat? The Illini are only a third of the way through their schedule, so their season's narrative is still being written, but on Thursday night, they battled the #10 team in FCS and obliterated Chattanooga. It would be easy for Illini fans to say, "That's what the Illini are supposed to do." and dismiss this game. Don't make that mistake. Northwestern lost to an 0-2 Southern Illinois University team up in Evanston. These games aren't automatic wins despite fans who would like to label them as such.

While the Fighting Illini haven't ever lost to an FCS team, it's not hard to think back to the 19th ranked 1985 Fighting Illini team squeaking by that same Southern Illinois University team 28-25 in September 1985.  This was an Illini team that featured Illinois football legends Jack Trudeau, Thomas Rooks, David Williams, and Craig Swoope amongst others. Any win is a good win. So don't poo-poo a 31 point victory.

This year's Illini pitched a shutout on a night that they were expected to play well.  The Illini defense pitched a shutout. They've only had one loss and that was the result of one drive. When the Illini discover ways to play smarter and with more intensity down the stretch, losses like Indiana will not happen again for this team.

Out of the backfield, Chase Brown ran for 108 yards and a touchdown. It was also a big night for Brown in the record books. The Illini have been playing football since 1890. Amazingly, Brown become the first Illini in history to rush for 100 yards or more in five straight games - which seems impossible for this not to have been done before by an Illini running back. Brown also moved up to 14th place in rushing yards in Illini history, passing up Red Grange, Chubby Phillips and John Karras in tonight's game. Brown also become the first running back at Illinois to open the season with four straight games of 100 yards rushing gained. This is a another record that one would have assumed has been done at least once in 132 years of playing football at Illinois.

When you combine the wide receiver output with the running back output, this was the first game that the Fighting Illini have ever had two wide receivers with over 100 yards receiving and one running back with over 100 yards rushing in the same game. When one considers the high powered Illini offenses of the 80s and early 90s, its hard to believe that this has never been done before in Illini football history. Amazing accomplishments from the Illini offense against Chattanooga. 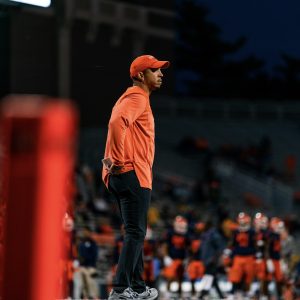 After the Virginia game last season, when the Illini gave up 42 points in a one sided defeat, the defense has become one of the stingiest at giving up points in the nation. In the twelve games since Virginia the Illini have allowed 24 points or less in 12 of the 13 games (only Iowa with 33 points exceeded that number).  Only Wisconsin (24) and Indiana (23) have exceeded 20 points. Over that stretch of 14 games, the Illini have allowed only 194 points, or 14.92 points per game, in this collegiate football environment which is designed to have teams scoring lots of points.

The Illini face a formidable opponent in the Wisconsin Badgers next week. The Badgers were surprised 17-14 by Washington State at Camp Randall in their second game and will be playing against the Ohio State Buckeyes on Saturday. While the Badgers may still be trying to figure things out early in this 2022 season, they do have Jim Leonhard, one of the country's best defensive coordinators, controlling the defense. Like the Illini, the Badgers often rely upon their defense to keep games close. This game will be no different. Two heavyweight defenses will be slugging it out to determine who will gain the upper hand in the Big Ten West.

If the Badgers lose to the Buckeyes, they don't want to absorb two conference losses in a row. The Illini will also be looking to avoid their second Big Ten loss after losing 23-20 to Indiana in a game that was dominated by the Illini in every metric except for the score. Both teams will be playing to avoid a key loss and it may come down to the defense that makes the fewest mistakes for the win. Or, the offense that can control the game by scoring one more time than the other team could determine the game. The Illini's improving offense may be able to succeed "just enough" to pull out the win.

The Illini then return to Memorial Stadium to play four of their next five games at home. Iowa and Minnesota, then a trip to Nebraska, and the team returns to play Michigan State and Purdue at home. The opportunity is there for the Illini to control their own destiny in the B1G West. It would certainly help to see crowds closer to 50 or 60 thousand in Memorial Stadium.

Memorial Stadium can rock and be deafeningly loud, if the crowd is there and engaged. This is an entertaining defensive team and with the wrinkles Barry Lunney Jr is adding to the offense, the Illini are becoming much less predictable and very watchable. More fans to cheer them on, make noise, and challenge the visitors on their own play calling and communication from the sidelines to the field would be a valuable asset to a team looking to make noise in the Big 10 for the first time since 2007. A win at Wisconsin would really help Illini fans make the decision to purchase tickets. Let's hope it happens.