Heat Checks and Hail Marys - Two in a Row is Bad

Last night was bad. After jumping out to a 23-8 lead, the Illini had to take out a tired Kofi Cockburn for a bit of rest. There is no way that running on a treadmill can simulate the exertion required by participating in an NCAA basketball game in front of a stadium full of fans. Once Kofi came out, the Illini never got back into that offensive groove. The Illini started missing shots and as their offensive woes mounted, their defensive intensity wavered and Cincinnati began an ugly route that ended up with a 71-51 victory for the Bearcats.

The Illini were led by Kofi Cockburn with 18 points and 7 rebounds and Andre Curbelo with 12 points and 5 assists and 5 turnovers. Alfonso Plummer went 2-5 from the three to end up with six points and Austin Hutcherson playing 10 minutes ended up with 5 points, 1 steal and 1 block. The only other statistic of note was Da'Monte Williams ended up with 10 rebounds while struggling with only 2 points in 27 minutes. Those were the positive stats and that wasn't a very long or very impressive list of accomplishments for this game.

To make things more challenging, Trent Frazier went 0-9 with no points. Jacob Grandison ended playing 15 minutes and scoring 1 point. Coleman Hawkins played 22 minutes and scored 2 points and snagged 1 rebound. These are players that need to contribute to the scoring on the offensive end of the court. The Illini basketball team is not capable of winning basketball games when only Kofi and Curbelo show up to score points - and Curbelo took 12 shots to get to his 12 points.

Brad Underwood's teams have had some rough games over the years in the early season. This offensive ship needs to be righted and it needs to get done soon. Luckily the best predictor of the future is the past and Underwood has been very successful at getting his teams to peak at the end of the season.

Heat Check #2 - Attacking from the Wings

The Illini are struggling to attack offensively from the wing. They have shooters that are more comfortable catching and shooting rather than putting the ball on the floor and penetrating. On top of that, last night the catch and shoot contingent missed shots early (and often) and then hesitated to take additional shots. Open looks were passed up and the offense stagnated and was limited to passing around the perimeter or endless dribbling at the end of the shot clock as a result. Open looks became rare as they defense didn't have to worry about dribble penetration. One dimensional players are easier to defend.

One sign of hope is that Austin Hutcherson is looking better from a physical standpoint. He missed last year due to a back injury and the prior year he sat out as a transfer (the pre-portal days) for two years of no games - but his ability to elevate and move is impressive. While his shots didn't fall last night, his form looked good. His ball handling skills coupled with his three-point shooting ability forces defenders to work much harder to keep him from scoring. The Illini desperately need a wing who can pressure the defense and create his own shot.

Right now, Curbelo is the only player who can do that and he's inconsistent as a scorer. Trying to do too much also causes Curbelo to rack up turnovers at a higher rate than last year when Ayo and Kofi could take pressure off of the point guard. Adding one more consistent scoring threat will give both Curbelo and Kofi more room to operate and make the defense have to work much harder than keeping track of "just" a point guard and a center.

RJ Melendez has also looked capable of stepping up to contribute as a wing. He attacks the basket off the dribble more aggressively than anyone on the team and is not afraid to put up shots from outside. If he and Hutcherson can elevate their play on a consistent basis, it would be good to get a taller wing on the court from a defensive standpoint. Both would have to commit to playing the aggressive defense that Underwood likes his teams to play, but that is a matter of desire, not skill. Better play from both would allow platooning these two as a long-term plan that could come to fruition by B1G conference play. 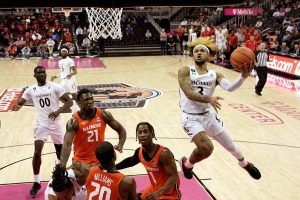 Illini fans are already agitated at and frustrated with this team. Fans have the luxury to respond that way to adversity. Some do their inner calculus and figure that the players and/or the coaches are overrated (or worse) and flip it to the Bulls game instead to relieve stress. High expectations have made this early and unexpected two game losing streak much less palatable than it would be for many of recent Illini basketball teams.

The coaching staff and players don't have the luxury to quit on the team - or to dwell on such an option. They have to identify the problem, take corrective action, practice until the proper behavior becomes a reaction (not a consciously controlled choice) and move forward to execute the plan. Getting knocked down doesn't mean the team is knocked out. They have to maintain their focus and work on the skills they need to master in order to win games. It's not sexy work but it is invaluable.

I've been asked many times to compare teams and athletes from different eras to figure out who would win a mythical battle between those teams or athletes. One of the arguments that is a staple of barroom debates is the Muhammad Ali versus Mike Tyson argument. Both were great champions and both were formidable fighters - yet, the answer is an easy one for me. Muhammad Ali would win. When he got knocked down or when he lost, he found a way to come back stronger than the last time. He would take the loss, learn from it and use it to mold his future behavior. Mike Tyson could never do that. Once the veneer of invulnerability was stripped from him, he became a lesser version of himself.

The Illini have hard work ahead of them. They have to find a way to regain their self-confidence (not arrogance). They have to get better and learn from their mistakes. That means shoot better, ball handle better, play defense better - and they have to do it as soon as possible. The season isn't over. Focus on the task at hand and keep moving forward - even if only a bit every day. The Illini need to get up after being knocked down. It's not sexy work but it's invaluable.

Coach Underwood has proven he can get his team to peak later in the season. He's going to need to get that started a bit sooner this season. Why not start tonight?