Heat Checks and Hail Marys - The One That Didn't Get Away

Welcome to the Valentine's Edition of Heat Checks and Hail Marys. I hope everyone is having a Happy Valentine's Day and Los Angeles Rams fans are happy after a Super Bowl win. Now, let's get on to what happened yesterday.

Everyone has the fishing story about that great fish that got away. As the years go by the fish gets bigger and the struggle to land the fish get bigger as well. For sports teams, there are losses that everyone looks back on as being really bad losses. Losses that end a season, lose a conference title, or even keep a team out of the NCAA tournament. This wouldn't have been one of those, but it would've been disastrous to give a game back in the loss column when both Wisconsin and Purdue lost their previous games to allow the Illini to sit alone at the top of the B1G.

With a bit of luck, some timely play by Kofi Cockburn and a fantastic second half by RJ Melendez, the Illini survived. Sometimes, that's enough. On Sunday, for the Illini, this victory kept them in first place. On to the next game on the road against Rutgers. Most likely, this will be a hard-fought battle - and at Rutgers, the Illini will have to play well to win. While it isn't sexy, getting on to a plane with a one game winning streak is better than flying to Wednesday's game with a two-game losing streak.

This game wasn't a big fish. It also didn't get away. Consequently, after this win, we all have a chance to embrace another of the small victories. 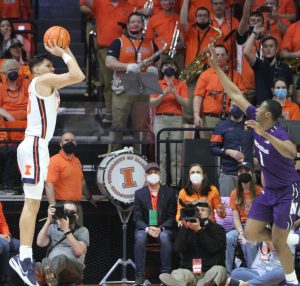 RJ Melendez has been playing well, particularly on the offensive end of the court. Last Tuesday night at the Illini's loss to Purdue in Mackey Arena, Melendez raised eyebrows when he was put in by Coach Underwood to guard Purdue's POY candidate Jaden Ivey. Being granted that level of responsibility showed Melendez, the rest of the Illini team and the media that the staff has faith in Melendez on both ends of the court. Against the Wildcats, Melendez got his chance to make a difference and he took full advantage of the opportunity.

Melendez played 17 minutes, his most since the regular season opener against Jackson State. Melendez broke into double digits for the first time in his career, scoring 14 points on 3-4 shooting (including 2-3 from the 3) and 6-6 from the FT line. These free throw stats were more impressive as all six were made in the last three minutes of the game. But RJ's production didn't just stop with points. RJ was also valuable on defense. One example is easy to point out, Melendez was forcing tough shots on the Wildcat opponents and when he was beaten on backdoor cut, RJ was able to recover and block the shot. The Illini haven't had that type of athlete on the wing for a very long time.

Melendez also had six rebounds in his 17 minutes. He has a knack for either being in the right place instinctively or he follows the ball even while defending his own man and ends up getting more than his fair share of rebounds by going after the ball hard. Or it may be a combination of both factors. Either way, it was appropriate that the last Northwestern miss that marked the end of the game ended up as a rebound in RJ's capable hands.

On top of those contributions, RJ was able to snag two steals as well. He clearly understands that Coach Underwood requires defense to be played to get on the court. RJ is doing his best to send a message that he will be the starting small forward next season. He is also starting to fill a valuable roll of getting important minutes and helping the Illini spell their starters as this season progresses. 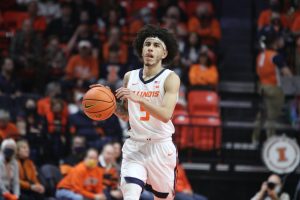 Andre Curbelo had a challenging game today as he had four turnovers and even had a couple of bad defensive possessions as well. It is critical to understand what he brings to the team in terms of his pick and roll aptitude and his ability to control pace. He also provides a strong defensive presence at the guard position that Plummer doesn't. Curbelo also finds ways to contribute beyond points - he had three rebounds and two assists to go with his 2-3 shooting in 16 minutes of action today. These benefits are needed for the Illini to fully realize their potential as a team.

Curbelo is still rounding his way into playing shape after being in concussion protocol for nearly two months and then having to come back from COVID as well. Being able to practice and get his feel for the game back is critical. The goal of Curbelo should be to replicate his play of last year when he closed out the season. Curbelo took what the defense gave him and reduced the number of times he took chances with the ball. His production on the court was strong enough that it earned him nominations to preseason All-American teams. This should be the template for his style of play going forward.

Curbelo appears to be pressing. It's easy to see where this impulse might be coming from. Who doesn't want to make up for lost time? He's not been able to play for a large chunk of the season and occasionally it seems like Andre wants to catch up all at once. If he uses films from last season as his target, he can become a huge asset for the team as he works on his conditioning for the NCAA tournament.

Heat Check #3 - The Defense of Hawkins is Big 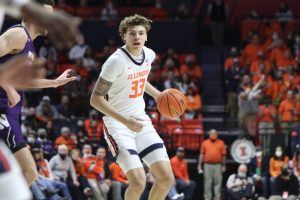 Coleman Hawkins has been in a bit of a funk lately. His offense hasn't been as effective during the B1G season as it was in the non-conference schedule. Finding the B1G competition tougher than the non-conference competition is hardly a new concept. That said, against stiffer competition, the team needs another big body that can defend larger and more mobile power forwards. At times, Da'Monte Williams and Jacob Grandison aren't tall enough to be effective, particularly in post-up and in rebounding situations. Hawkins has the height and quickness to deal with power forwards and even smaller centers. He has the opportunity to get stronger, but when Hawkins is focused on defense, he can really help this Illini team. He needs to stay focused.

Yesterday, Hawkins didn't attempt a shot in his 13 minutes on the court, but he also three rebounds, three assists and a steal. These are also contributions that make him valuable to the team. As he works to gain confidence in his shooting, there are many other ways Coleman can contribute to the success of the Illini in other ways. He has to keep that in mind. He has enough talent that Coach Underwood has mentioned in press conferences Hawkins could play in the NBA someday. Hawkins has to recognize that points are just one component of what the NBA is looking for from its players. Focus on the defensive and rebounding aspects of his game. It will help the team and help his own journey towards making it in the NBA.