Tonight's game was one of the matchups that I was most concerned about coming into the season as Ohio State is athletic and long, especially on the wings. They have an ability to shut down the Illini offense for stretches of time largely due to the defensive pressure they can put on the three-point line and the passing lanes they can clog using their size and length advantage over the Illini's 6'1" to 6'3" guards. On the offensive end, these wings can take smaller guards into the lane and get fouls. And tonight, with the challenging referee crew assigned to the game, the Ohio State Buckeyes shot 32 foul shots on the road in the B1G to ice a close victory over the Illini.

This topic is becoming a boring one and a repetitive one. Why? Kofi's adventures, particularly the lack of fouls called as he is on offense, continues to make Illini games frustrating to watch. 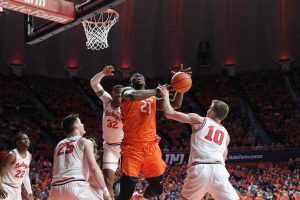 It's easy to avoid a bad game for both player and team when you can get bailed out at the free throw lane. If you're a big guy like Kofi, there are few bail outs. B1G referees have had the audacity to tell Coach Underwood that the rule book doesn't count for Kofi. If he brings the ball down, he's not getting foul calls. That rule doesn't apply to the wings and guards in the league. This rule doesn't apply for any other centers in the B1G. If you reach in on other B1G players while they have the ball, the whistle is blown, but not so for Kofi. Why? No one knows, but that's the "explanation" given to Coach Underwood.

The first time the Boilermakers and Illini met, they played an overtime classic. Cockburn fouled out, shot 4 free throws, got hit in the face by three elbows - one of which put him in the concussion protocol - and none of which were called a foul. In that same game, Jaden Ivey went 3-10 and somehow was rewarded with 15 free throws. At lower levels of basketball that's called a bail out by a referee. I'm not arguing that the Illini should've won. I'm arguing that Kofi Cockburn had as fair of a shake in officiating in that particular games as the bull has at a bullfight.

When the Illini played the Badgers in their one meeting this year, it was a similar story. Kofi goes 16-19 and gets to shoot 9 free throws. This was a nice number of free throws, but Kofi had 19 made shots. In essence, nine free throws might actually be on the light side. As expected, Wisconsin guard Johnny Davis had a different story. He went a putrid 5-19 from the field, yet somehow (like Ivey of Purdue), Davis gets rewarded with 14 free throws. Essentially, the bad shooting night was made up for by the referee bailouts.

Against Ohio State on Thursday night, the Illini faced another pair of talented wings in Malaki Branham and EJ Liddell. Kofi struggled and fouled out on a couple of very weak foul calls. Kofi was hit low continuously, and he was even knocked in the head by EJ Liddell on a tremendous highlight reel shot block. Kofi struggled and went 5-15 from the field and was only at the line for 4 free throws. Meanwhile EJ Liddell and Malaki Branham shot a combined 18 free throws. In a three-point game, these two players alone shot more free throws than the entire Illini team.

Ohio State was very smartly coached. The Buckeye defenders didn't do much to contest Kofi at the top of Kofi's shot - that's where the ball and the eyes of a referee are. Instead, the Buckeyes were excellent at moving his hips on the way up and hitting him in the chest and back. Referee eyes aren't there. And it worked. Kofi missed shots, he let it bother him, and he fouled out. More teams are seeing this behavior rewarded in the form of a missed Kofi shot and no corresponding foul call. It is rapidly being replicated across the B1G. That's why this is a repetitive subject. B1G basketball coaches are the best in the country. The B1G refs aren't.

This is a subject that gets brought up a lot by Illini fans. It causes some to say that they're tired of hearing about it. They hear about it because Kofi is a junior and it happens all the time. When referees tell his coach that we could call a foul on Kofi's defenders every time he touches the ball - and then he only shoots four free throws, that tells you it's a problem - and it is a big one along with being a repetitive one.

It was clear that Brad Underwood has seen enough this season. After multiple games of watching Kofi get mugged without whistles and having him foul out on touch fouls that weren't called against players like EJ Liddell, Underwood exploded in support for his All-American center. Underwood earned two technical fouls and was thrown out of his first game as a head coach.

Thankfully, Kofi is a great kid and is probably too nice for his own good. He hasn't lashed out violently as we witnessed from Michigan and Wisconsin players after the experienced a "rough" handshake line. Kofi has responded with class to the lack of calls and physical punishment. It might be that his only recourse is to dunk every single shot he takes within three feet of the basket.  If he takes someone's arm with him, well that's too bad. Force the refs to call a foul. No bringing the ball down. No use of the bank board. Simply dunk. Dunk hard. 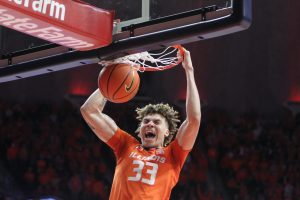 Here are a few quick takes: