The Illini lost to a determined Rutgers team on the road on Wednesday night. They also became the answer to a trivia question when they became the fourth ranked team in a row to be beaten by an unranked team - a feat never accomplished by a college basketball team before.

Coach Underwood outlined what he saw on the court. There was little evidence of the Illini's formidable defense and the shooting that had propelled the team to the first place in the B1G in New Jersey.  It was clear that he saw the Illini's lack of energy, spirit or fight. He noted that the team needs to play hard enough to not be worried about taking shots. And don't get him started on the rebounding.

How does the team come out of this rough patch of shooting and inconsistent defense? The treatment depends upon the diagnosis. What is the root cause? That's the question that Illini fans are asking right now.

Heat Check #1 - One Possible Diagnosis - the Illini Have No Heart

This assessment of the Illini team is clearly one of the worst examples of logical thought processes possible. A person can't just pick data points one agrees with and only pay attention to those data points. At the same time, a person can't choose to completely ignore other data points that clearly conflict with the original thoughts.

Would a team that has no heart been able to come out of the disastrous Rutgers game having won eight times in its last 11 road games and having won five of its last seven games overall? Would a team with no heart come into the Rutgers game ranked first in defensive efficiency in B1G play by kenpom,  have a defense ranked first in effective field goal percentage, and second in three-point percentage? No would be the answer to all those questions.

The ugly Illini Twitter-verse hot takes are patently false and barely worth repeating. This team has more than enough heart to win the B1G despite the injuries and assorted other issues that have cost the team games missed by key contributors throughout this season.

It takes heart to play great defense and this team has proven that it can do so. It has however also played a few games where the defense has disappeared for a half or reappeared with a vengeance for a half. That needs to change.

Heat Check #2 - Another Possible Diagnosis - the Illini Offense is Horrible

The offense has been plagued by inconsistent moments since the COVID break has ended. Here are a few examples of games where the offense just switched off for a half:

The Illini haven't seemed to be able to hit an extended period of time in an offensive groove. Part of that is the B1G is so tough - with seven or eight tournament teams, there just aren't many easy games. At the same time, the outside shooting that made the Cockburn, Frazier, Grandison, Williams and Plummer the most efficient starting lineup offensively in the nation hasn't been clicking.

For some reason the shots aren't falling consistently this season. This team clearly has players who can shoot, and it clearly has an offense that yields open looks at the basket. They have to start making baskets.

Heat Check #3 - My Diagnosis - the Team Is Gassed

As someone who doesn't attend practice, doesn't communicate regularly with the coaches, and doesn't talk to the players outside of talking with Da'Monte on our radio show, this theory is just that, a theory. Let's take a look at why I've come to this conclusion.

This season has thrown an incredible number of obstacles at the team:

When these injuries hit, other players have to step up and play more minutes. At the same time, this year's Illini are a remarkably old team. As Coach Underwood said, get old and stay old. When a player goes down, it's much easier to pick another veteran with years of experience to fill in for the player who can't go. Look at the experience, Trent, Da'Monte and Alfonso are all in their fifth year of actually playing the sport due to the extra COVID year.

Veteran players have a large database of experiences that they can mentally reference instantly to help them navigate through challenges during games. They've already struggled through learning curves and are much more likely to play with a higher floor when it comes to results on the court and maybe a higher ceiling in some instances. To increase their minutes is logical and a tactically wise move.

Putting in one of the younger players - particularly the freshmen - means at times you have a true wildcard on the court. Will they allow an offensive player to drive to the basket with no contention of the drive or the shot? Will they take the crazy shot on offense?  Maybe they might. Will they go on a roll and score down the stretch of a game and shock everyone? That could happen, too.

To a fan it isn't a big deal - roll the dice - see if you can get the hot roll and scoop up the winnings. To a coach that unpredictable play can mean the difference of a win turning into a loss when the team wins 56-55 at home or 59-56 on the road. A few unpredictable plays and the Illini are two games behind the B1G leaders. That's reality.

Heat Check #4 - Add the Freshmen to the Mix 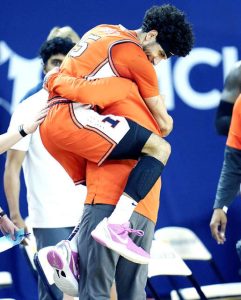 Curbelo and Underwood at Michigan in 2021

Going into this suggestion with eyes wide open, I understand the dangers of playing the freshmen. This is a high risk, high reward solution. At the same time, we know key Illini players have been used a much higher number of minutes than would've been expected before the injury bug and crazy situation fairy hit the team. I submit that playing the freshmen (or younger players) a bit more will do three things:

This is a risky proposition, but I'm not saying play the freshmen 30 minutes a game. Play them 10 minutes a game. Avoid playing them together. Take advantage of their length and try to put them into positions that they will have the highest probability of being successful.

Last year, we saw Coach Underwood make the choice to put an arm around Curbelo's shoulders and build him up during his impressive season-closing stretch of games. Underwood's guidance of Curbelo's talent helped him earn pre-season All American status. Most coaches wouldn't have been able to pull that off, but Coach Underwood did.

While it's easy to fall for the Brad Underwood is nothing but a “tough guy coach” myth, it's clear he has more weapons in his coaching toolbox than most of us realize. It may be time to use those tools to build up a few freshmen - but not just for the future, but for this year as well. No one wants the team to lose at the wire if one or two additional contributors could help make the difference in the team crossing the finish line in first place.