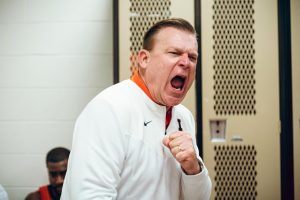 The Illini went on the road to Michigan State to take on the 19th ranked Spartans. That alone is a daunting task. The Illini were also in a dual funk - on one hand the team wasn't playing with the intensity that Coach Underwood expects and requires, and on the other, Illini weren't shooting well. Visiting Coach Izzo and his team isn't how a program would choose to set up a "let's get the magic back" game. Add in the fact that Michigan State had their own struggles and were motivated to play hard, and it was a tall task to win this road game.

While many expected a Breslin Center beating (yes, it's a double meaning) to occur, the Illini came out and controlled the game from beginning to end. They did it with only Kofi Cockburn and Jacob Grandison hitting shots from beginning to end. Trent Frazier added some second half shooting heroics and the Illini walked away with a 79-74 victory. The Illini swept the season series with Michigan State for the first time since 2005-06 and beat the Spartans in East Lansing for the first time since 2015.

The biggest winner yesterday might have been Pizza Hut. The chain is getting tons of publicity thanks to Coach Underwood's Fight Club adjacent anecdotes during his press conferences this week.

Heat Check #1 - Fighting Back Every Rally

The Illini were up by 12 at halftime. In the second half, the Spartans made multiple runs at the Illini only to have the Illini push the lead back over 10 points:

The Illini effectively repelled multiple attempts to by the Spartans to narrow the game. Time and time again, the Illini managed to shorten the game and limit the time for the Spartans would have to come back and win the game. It's not easy to keep pushing a team back and preventing an opponent from getting on a roll, especially on the road. Yesterday afternoon, the Illini did that very thing and "shortening the game" helped Illinois pull out the victory. 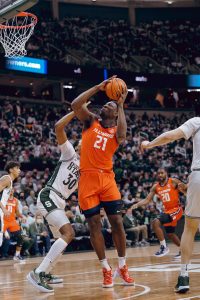 Kofi Cockburn had a typical Kofi game with 27 points, 9 rebounds, and an assist and a steal. He hit 7 of 9 at the free throw line to prove to Coach Underwood that he wasn't a coward who was afraid of going to the line down the stretch in a close game.

If this wasn't an excellent audition for the National Player of the Year award, I don't know what is. Winning a B1G game on the road against a Top 20 team isn't an easy feat. To go 10-15 from the field while winning is an excellent accomplishment. Scoring 27 points on 15 shots is impressive as well. Additionally, Cockburn was the first player since 2010 to score 27 or more points and have 9 rebounds or more at the Breslin Center. He also remains the only player averaging at least 21 points and 10 rebounds per game this season.

Jacob Grandison bounced back from a shooting slump to score a career high 24 points and a career high 6 three-pointers in one game. He also had 5 rebounds and 5 assists. Like Kofi, Grandison was a key figure in beating back several Spartan comeback attempts. He was also able to hit shots after shooting an ugly air ball. In response, the students in the Izzone were relentless in yelling "air ball" whenever Grandison touched the ball. To find his range again after that demonstrates why a coach wants older and more mentally mature players on the court when it matters. 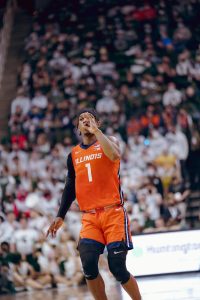 After Kofi and Jacob kept the Illini afloat on offense during most of the game, as the game got closer as the game clock was running down, Trent Frazier's shooting touch returned with a vengeance. In the last minute of the game, he scored on a layup with 58 seconds to go and slid in the dagger with a three-pointer with 23 seconds left that ended any chances of a Spartan rally. When the team needed Frazier on offense, he was there. He had a strong second half from an offensive standpoint, scoring all 12 of his points after the break. As per usual, his defense was outstanding all game long.

It's also worth mentioning that Coleman Hawkins brought energy and hustle to the game today. His defense has been better as of late, but today he had the "shot block heard round the world" as he rejected Malik Hall at the rim on a play that loomed much bigger later in the game as the Spartans closed the gap. Hawkins scored two points but had 4 rebounds, 2 assists and 1 steal to go along with that block. His assist from the right block to the left wing for a Frazier three-pointer was a thing of beauty.

Finally, while Andre Curbelo didn't score a lot of points yesterday, he did play good defense down the stretch. Just as importantly, he didn't try to do too much on offense. He took what the defense gave him and was content to not force the ball into situations that produced turnovers. Each season is a journey and Curbelo made progress on a day. Stacking days is an important concept. He needs to keep doing it.

Curbelo has not had a lot of practice this season due to concussions and illness. Curbelo has only been able to practice in 14 of 85 total practices this season. Due to this, it's not impossible to expect to see his results jump up dramatically as he rounds into shape over the next couple of weeks prior to the B1G tourney. The Illini have four games remaining on their regular season schedule.