It was an historic win yesterday as the Illini defeated the Hoosiers in Indiana 74-57. Following last year’s overtime win in Bloomington, the Illini have now won back-to-back games at Indiana for the first time since 2009 and 2010.

The margin of victory was the largest ever by an Illini team in games played at the Assembly Hall, which was built 50 years ago. The last time the Illini won by a larger margin in Bloomington was in 1956, when the #8 Illini beat the #12 Hoosiers 96-72 on January 14, 1956.

For those who aren't old enough to remember the 1955-56 Fighting Illini basketball team, they were 18-4 overall with a conference record of 11-3 in the B1G. The team was notable for some of the players on the roster and their effects on Illini basketball that are being felt to this very day.

The Illini found themselves down 36-34 at the half despite Trayce Jackson-Davis getting his 2nd foul with 15:44 in the game and Coach Woodson sitting him for the rest of the first half. Both teams had reasons to feel confident going into the half. The Illini could've been down by more and the Hoosiers felt the same way. 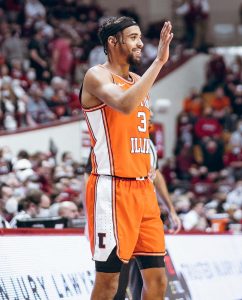 The second half started like the first half ended, as both teams sparred back and forth in a slugfest with neither team able to widen the gap by any sizable margin. With 12:43 left in the second half and Indiana up 46-42, the game changed.

From the point of Jacob's first three-pointer, the Illini blitzed the Hoosiers to the tune of 32-11 in the last 13:11 of the game. Looking at the entire second half, Frazier and Cockburn outscored the Hoosiers 26-21 and made 9-12 shots versus the Hoosiers making only 8-27 shots.

The other key was the Illini defense again rose to the occasion in the second half of a B1G game. The Illini held the Hoosiers to 29.6% shooting from the field in the half. The Hoosiers shot even worse from the three-point line at only 16.7% from behind the arc.

Behind this onslaught at both ends of the court, the Illini cruised to a 17-point victory.

The Fighting Illini basketball team is building up momentum after having to fight through an almost endless list of unlikely obstacles. The team has overcome rotation players being lost to suspensions (Cockburn), concussions (Curbelo and Cockburn), season ending surgery (Hutcherson), a flu outbreak, and a COVID break.

The list of accomplishments is getting longer. One example is the concern that the team didn't have any "signature wins" for the NCAA tournament selection committee to attach to the Illini resume. Earning a high seed requires great wins during the season. This concern was expressed by many, particularly after the Illini's double overtime loss to Purdue on MLK Day in January.

With upcoming games at Purdue and Michigan State, there are more opportunities for signature wins - along with a home game against Ohio State. This is a major challenge, but this is also the pathway to a very successful seed if the Illini can continue to win with outstanding defense, strong rebounding and timely shooting.

The Illini have other accomplishments that are piling up under Coach Brad Underwood. They are achieving wins that allow the reputation of the Illini to revert back into the national power that they were in the early Bruce Weber/Bill Self era and in the 80s under Coach Lou Henson.

The schedule is tough, but the team is in a position to control its own destiny. Coach Underwood is building a nationally relevant basketball program, returning the Illini to a place they haven’t been at since 2005-2006.