The Illini faced a dangerous Michigan team on Sunday afternoon. The Wolverines are uber-talented physically, but very young. With Juwan Howard suspended, Phil Martelli was at the helm of the Michigan squad and both Moussa Diabate and Terrance Williams II were returning from their one game suspension for throwing punches during a handshake line against/with Wisconsin. On their home court and with the Illini coming off of a hard-fought loss to Ohio State on Thursday night, the table was set for the Illini to be upset by a youthful Michigan team in a classic trap game.

Due to a game long, nearly unstoppable offensive output and timely stops on defense, the Illini came away from the Crisler Center with a victory that sets them up to root for the Boilermakers to upend the Badgers on Tuesday. If that happens, the Illini will control their own destiny. By winning against Penn State on Thursday and Iowa on Sunday, the Illini will be guaranteed a share of the B1G regular season title. The Illini have executed one third of the three-point plan they need to win a title. Now, they have to look to the Boilermakers to make the plan work. 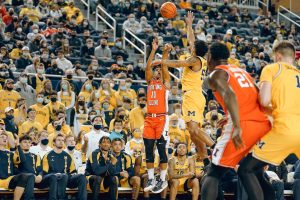 On Sunday, Illini fans saw the team that we thought we'd see every game before the season started. With the exception of the injured Austin Hutcherson, Coach Underwood had the ability to use all the pieces on the chessboard that he planned on using in the off season. No more worries about suspensions, concussions, COVID, the flu, or injuries. On Sunday, the Illini staff could play whoever was bringing the best to the game at any particular moment. Illini fans had the chance to see a glimpse of the team they expected to see before all of the obstacles arose shattering the planned playing time of this iteration of the Fighting Illini.

Alfonso Plummer shredded the Wolverine defense for 23 points in the first half. He ended up scoring 26 points for a second straight game. In the second half, he had issues on the defensive end. After going underneath a couple of picks - and allowing open looks and makes from the three-point line - Coach Underwood decided to go with Andre Curbelo. Few teams can make the choice to sit down a player with 26 points due to defensive lapses. Today, Andre Curbelo played well enough to make that reality happen.

Kofi Cockburn scored 19 in the second half. While Hunter Dickinson is a fabulous player, on this day, Kofi imposed his will on Dickinson and effectively reduced the opposing center to the role of a glorified rebounder when Cockburn was in the game. Dickinson struggled against the Illini 2nd team All-American in a way he didn't when he went up against Purdue's formidable center duo. The Wolverines had to make a choice of what they wanted to give up - and in the second half - Kofi made them pay for choosing to focus on stopping the Illini three-point offense.

To make things worse for the Wolverines, Trent Frazier was able to play off ball on offense more often due to the solid play of Andre Curbelo. Frazier played 38 minutes, yet again, but he had fresh enough legs to slide in another dagger for the win in the form of a late three-point shot as he did against Michigan State. In the last 0:45 seconds of the game, Trent had a three-pointer, went two-for-two from the free throw line and had an assist to Kofi Cockburn.

When these three are hitting, the Illini are capable of beating anyone in the nation. As long as Kofi doesn't pick up phantom fouls and can stay in the game. Today, Kofi didn't rebound as effectively as Illini fans were used to, but he still ended up with 7 boards. He didn't achieve the double-double that Kofi is famous for, but his 27 points led all scorers in the game.

Heat Checks #2 - The Bench Strikes Back 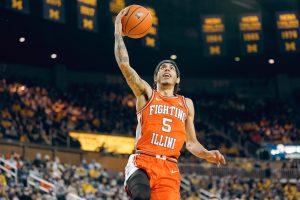 Coleman Hawkins was amazing. He played the four in a lineup with Kofi Cockburn that results in a much bigger Illini team to defend against a bigger Wolverine lineup. He also played a few minutes as the small ball 5 in a lineup that makes for a very dynamic Illini team. Part of this small ball lineup is forced by (maybe inspired because of) the foul trouble that Omar Payne has been putting himself in. Yet again on Sunday, Payne had two quick fouls and in four minutes, was forced out of the game.

Hawkins hit a deep three-pointer and had a highlight reel dunk. He displayed his refined passing skills for another assist and a steal and four rebounds. Hawkins brings energy and confidence to the game when he enters. This confidence is similar to what he was displaying in the non-conference schedule early in the season. With his size and length, coupled with his athleticism, Hawkins provides a matchup conundrum for the opposing team. As long as he stays out of foul trouble, the Illini have a couple of tough lineups for opponents to deal with.

Andre Curbelo played within himself on Sunday, playing what was probably his best game since his triumphant return from concussion against Purdue on Martin Luther King Day. He scored 12 points on 5-7 shooting and really only forced one shot. Taking what the defense gives him is what he did so well during the closing stretch of last season. Seeing him start to play that same way is encouraging for the Illini prospects this season. If he can take fewer chances and use what the defense gives up - the Illini will be better. He constantly made it to the rim on Sunday. If that becomes a multi-game trend, the Illini will be better.

Luke Goode deserves a quick shout out as well. He ended up making yet another key hustle play that was a sheer force of will. His rebound was yet another example of that hustle and led to another possession and a basket. He struggled to guard Caleb Houstan, but so do most of the players in his class. Luke's hustle and determination are the key. Goode understands that. He is using his hustle as a way to stay on the court. His contributions have been critical to Illini success, even if small in nature. Basketball is a team sport and players understanding ways to add to the team, even in minute ways, are important.

The Illini take on an angry Penn State team on Thursday night at 6 pm on FS1 at the State Farm Center. The Nittany Lions were crushed by Nebraska on Sunday night 93-70. While Penn State is not a B1G title contender, they have beaten Michigan State and Iowa at home and lost to Wisconsin by 2 in Madison, WI. The Illini cannot take Penn State for granted and the Nittany Lions will be looking to upset Illini NCAA tournament seeding hopes.

And of course, all Illini eyes will be on the clash in Madison, WI on Tuesday night. Wisconsin plays Purdue. Illini fans need to BoilerUp on Tuesday night to have a chance at earning a tie for the B1G title.

Congrats out to Coach Brad Underwood for winning his 200th game as a head coach and to Trent Frazier for becoming the 5th all-time leading scorer in Illini basketball history.

Listen to This/Don't Miss These Guests

Fans should really listen to Mike DeCourcy and Len Elmore talk with IlliniGuy Larry in regards to the Juwan Howard situation. It's well worth it.

Listen the IlliniGuys Sports Spectacular for this type of interview each week.