The plan is to run through several observations after spending the weekend up in Illinois and having the good fortune of being able to cover the Illini versus UTRGV in basketball, the Illini crushing Northwestern for the Land of Lincoln Trophy and watching an Illini team challenged by injury and illness defeat Notre Dame Monday night. Since the football season is wrapping up, I'll use Hail Marys unless it's a basketball story, then I'll use the Heat Check.

Hail Mary #1 - The Football Team is in Fine Hands 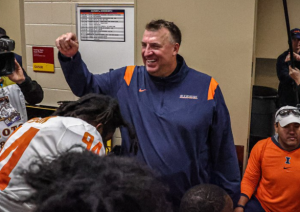 Bret Bielema finishes the season with a 5-7 record. The team lost 4 games by 8 points or less. They won 3 games by that same measure. For years the fans have heard that the university wanted its teams to be competitive, without much of a definition to understand what competitive really is. This year we understand what competitive looks like. Only one blowout this year - and that involved a very early start time in the eastern time zone.

Those are the types of dramatic improvements that demonstrate a coaching staff that can schematically outperform their peers and coach their own team's players. It also shows the players are committed to listening, being coached and executing a plan. That's always a great sign for future success.

Next up recruiting high schoolers and in the transfer portal. I'd bet that Bret has a plan. 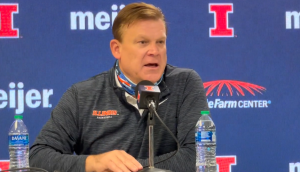 Anyone who knows how to effectively fight off the flu and keep it away from the basketball team can report to Ubben as soon as possible. Much longer and even Witch Doctors might be able to apply (with proof of vaccination and a mask).

With Grandison, Bosmans-Verdonk, Podziemski, and even Coach Underwood feeling the effects of the flu, this old school ailment forced the first practice cancellation of that type in Underwood's 35-year coaching career on Saturday. Add to it Curbelo's neck injury, Trent's leg injury and other aches and pains throughout the team and it's been hard to get in practices where everyone is present and working together as a unit. This is a big problem as understanding your teammates and knowing what they can and cannot do along with what they like to do and aren't comfortable doing is incredibly important. To date, the time the team has been able to accomplish this goal has been incredibly limited - and it has shown.

If nothing else, the Witch Doctor might be able to convince the Illini that defense will help on both ends of the floor. Stopping the other team and getting additional possessions is a great way to "hide" the fact that their offense may not be up to Illini standards right now. 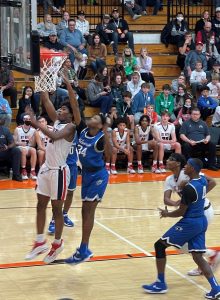 Kedric Prince, IlliniGuys Director of Recruiting, and I had the opportunity to go from the Northwestern Massacre to Washington to watch Morez Johnson, Jr. and St. Rita play against St. Louis Vashon. In a losing effort, Morez scored 24 points and had at least 9 rebounds (unofficially). He displayed physical ability that is staggering when one considers he is a sophomore.

Listed at 6'8", he might even be a bit taller, but he is athletic, quick and very strong. Those are traits that he can't control, one thing that he can control is his desire to win. He rates as close as a 10 out of 10 as one can be. Morez attacks the boards every play. He dives on the floor for loose balls. He hustles up and down the court. When considering intangibles like competitiveness, he displayed traits were comparable to the extremely rare Kenny Battle level of competitiveness.

The only challenge Morez had was at the free throw line where he struggled down the stretch of the game. Part of this could be due to the fact that in such a high intensity game, he played nearly every minute. His form looked good; the shots just didn't fall. More repetitions and making sure he has a repeatable process at the line will help him as well.

Morez leaves it all on the floor. He gave 110% on Saturday night. I realize that is an old cliche, but sometimes cliches have that grain of truth. This is one of those times. One wonders what kind of defensive wall the Illini might set up with both Ty Rodgers and Morez Johnson out on the wings at the same time. These two players will complement each other greatly and opposing coaches will be scratching their heads trying to figure out a solution to this type of talent on the floor and ready to play defense.

They've been the most successful radio host duo in Central Illinois for a long time. When visiting their studio at WDWS, I'm not going to embarrass anyone - but it's nice to not be the oldest guy in the studio for once. Despite their considerable advantage in experience that for others might result in just running through the motions, Loren and Steve still produce a great sports talk show every weekend. Going into the studio, it was an honor to watch these two work a show and demonstrate that you're only as old as you feel - so, my advice is don't feel old.

Once you're done listening to the IlliniGuys Sports Spectacular on the weekend, then you need to tune into Saturday Sports Talk on WDWS. It's great listening for Illini fans. There's a lot of great content out there and Loren and Steve have done it better for longer than anyone else.

Heat Check #3 - Dain Dainja Is Going to Cause Problems 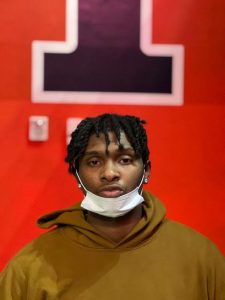 Dain Dainja is a high ceiling transfer from Baylor. He has excellent ball handling and passing skills. He just needs to come back from injury and maximize his time with Fletch to get back into playing shape in time for next year's iteration of Illini basketball. Until then, we're just going to have to wait to see how good he will be as a Fighting Illini player.

The real challenge for Dain Dainja and those following Illini sports will be tolerating writes and radio hosts like me who will want to use "danger" in headlines over the next three years. Here's a few phrases that I already plan to use. How about "highway to the danger zone" - everyone reading this needs to know it's a phrase that's going to get used. Same for "ride into the danger zone" - yep, rest assured, Kenny Loggins is going to get upset at me.

Not to be forgotten or overlooked, the Danger Room from the X-men comic books and movies will be used. The Danger Zone may be the new term I'll use for the State Farm Center on the nights Dain has a great game. Who knows where the Danger Room will lead me?

But wait, there's more? Let's acknowledge the words that rhyme with danger will also be on the table for overuse and just plain old bad use. Look out for ranger, stranger, arranger, and my favorite (and a great challenge to figure out how to use in a sentence related to basketball not Christmas) - manger.

If Dain Dainja lives up to the expectations of the staff, he's going to make this world a better place for sports writers with a flair for the dramatic. Or maybe the melodramatic.