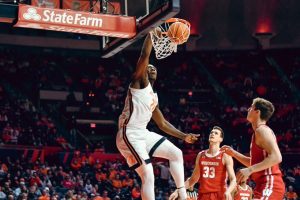 Last night was a tour de force for the Illini's Kofi Cockburn. For a player who is continually setting records or threatening long standing records, he played a phenomenal game - even by his own standards. With 37 points, 13 rebounds and 16-19 shooting, Kofi Cockburn is the first player over the last decade with at least 35 points, 10 rebounds and 80% shooting in a game against an AP Top-25 team. Everyone realizes it was a single game but clearly that type of dominance isn't seen often.

Indiana has had similar problems slowing down Kofi, barring referee intervention via confounding whistles, we might see Kofi have another dominant game come Saturday at 11 am central on ESPN as the Illini visit Assembly Hall in Bloomington, IN.

Kofi has an impressive list of accomplishments on the court this season. This is despite the controversial three-game suspension, missing two games due to concussion and having his team forced to use 9 different starting lineups due to injuries and illness while he was in the lineup. Let's take a look at a list compiled in large part by the Illinois Athletic Department research team after the Wisconsin game:

Kofi's accomplishments don't stop there, take a look at a list compiled by the same folks prior to the game, because yes, there is more:

I realize those lists are repetitive to read. That is the point I'd make for anyone voting for the B1G POY or the National POY. Kofi has done more than anyone to date. Kofi and other players across the country have time to accomplish even more on the court to make their respective cases for POY. The point is based on accomplishments, how can anyone not named Kofi Cockburn be the favorite at this point in the season?

After taking a trip through the B1G, in my eyes there are four stars that are clearly on their own level. The Illini have faced Keeghan Murray, Jaden Ivey, Johnny Davis and played against most of the B1G teams. They haven't run into EJ Liddell yet, that's coming on February 24th, but as an Illinois native, most have a pretty good handle on his abilities.

In my eyes, there are four players who stand out amongst the B1G as the true stars of the league (in no particular order):

I realize I am ruffling some feathers by not putting Johnny Davis on that short list and I realize I might be a lone voice in the wilderness sharing this opinion. There's nothing to dislike about Davis, his stats are excellent, and his rebounding and hustle are amazing. To me, doesn't have the reliable outside shot of the other wings and his athletic burst isn't quite the same.

In the B1G, the "B1G 4" plus Davis will be a force as long as they stay in the NCAA. I see Ivey, Murray, and Liddell being reliable NBA players. I see both Cockburn and Davis needing to tweak their games a bit to become NBA players, which isn't surprising as the NBA has so many uber-talented individuals that hard work is a requirement to be successful in the league. But there is a difference between Davis and Cockburn.

Kofi already has the physique and athleticism to be an NBA player - and he has the best strength and conditioning coach in the country to push him to new levels. I'm not sure if Davis' high-volume usage and reliance on rebounding his own misses as translating well to the NBA. He doesn't have the size of Murray or the incredible burst of speed that Ivey possesses.

Let's see how things play out. Maybe this column will be one of those "that aged poorly" moments for me. I've been wrong before, so no one will be surprised if I'm wrong again. 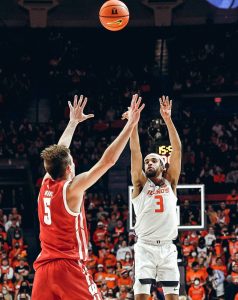 After scoring in double digits only twice in his prior 7 games and going 1 for 10 from the three-point line in his last two games, fans were looking for the Jacob Grandison of the pre-COVID break to make his return. After a rough early start to the game against Wisconsin, Grandison indeed returned to form.

The Finnish National Team player went 3-6 from the three-point line and 2 for 3 from inside the arc to score 14 points against the Badgers. His contributions didn't end there. He had a season high 7 rebounds, and he added 4 assists, 2 steals and a blocked shot to his totals. The only area that he didn't meet expectations was his 1-3 shooting from the free throw line.

When Grandison is hitting from outside and Kofi is a scoring machine on the inside, the Illini are markedly different team for opponents to defend. With 4 of the next 5 games on the road, including trips to Indiana, Purdue and Michigan State, the Illini will need Grandison to get on a roll like he did against Rutgers (16), Iowa (21), Arizona (14), and St. Francis of PA (18).

Grandison's sense of timing is impeccable.