The Illini methodically took apart a St. Francis team that was overwhelmed by Kofi Cockburn on this inside. The ability of the Illini shooters to knock down three-point shots with uncanny accuracy finishing at 52.9% for the game and setting a school record with 18 three-pointers made in the game sealed the deal.

On the other end of the court, the Illini played fantastic defense. They held the Red Flash to 26.2% shooting from the field. The Red Flash hit 6 0f 18 from the three-point line, but that number was helped by them hitting 3 of their first 4 three-point attempts launched. The Red Flash were down 13-11 with 13:10 left in the first half.

The Illini turned it on at both ends of the court and outscored the Red Flash 93-37 the rest of the way. The Illini played so well that they made the St. Francis team look considerably worse than they are. Such are the risks of playing against the Illini on the road after a week of practice.

Apparently, when Coach Underwood says a week of practice is all the team needs to get better, he's not joking.

Heat Check #1 - Kofi is the Heart of the Illini Offense 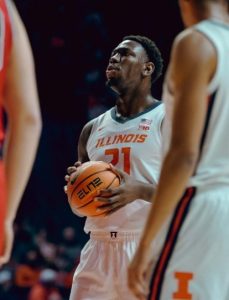 Kofi Cockburn was the engine that kept the Illini offense rolling. His ability to take the ball to the hole and score forces defenses to double team him. His newfound passion for hitting the open wing has made the Illini offense even tougher to defend.

While Kofi only had one assist today, he did send the ball out to Illini shooters. The Illini shooters were willing to reverse the ball with additional passes setting up multiple open three-point attempts. The All-American center doesn't get credit for an assist on plays like that, but his willingness to make the right play by passing the ball to the open Illini is what made the offense go. He was the ignition for an engine that ran over the Red Flash.

When Kofi hits open shooters, the defense is forced to make a choice. Do they continue to double team him? Do they allow the open three-point shot? Do they dare allow Cockburn to go one-on-one against their biggest defender? When the Illini are shooting like they are right now, there really aren't any good choices.

Kofi ended up with his fourth straight double-double and his sixth double-double in his first eight games. Cockburn is now one of only two NCAA players this season to average at least 20 points and 10 rebounds per game. Letting him go one-on-one in the lane isn't a good strategy for any team to employ.

Every team has to game plan on how to deal with Kofi. When the Illini All-American gets so much positive energy from passing to his teammates, and he executes that strategy, the Illini are a contender for the B1G and national title. And Kofi has even more fun. 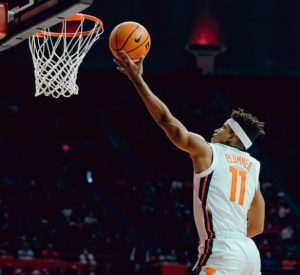 Plummer (and his teammates) have been hitting three-point shots at an incredible rate. With the Red Flash defense struggling to stop either Kofi in the lane or the three-point shooters, the Illini made the most of their opportunities hitting 18 three-pointers and setting a new school record. Illinois is now shooting 44% from the three-point line over the last seven games while making a 12.6 three-pointers per game during that stretch. In short, it's great when a plan comes together. Shooters hit threes and Kofi has even more fun.

Plummer scored 19 points, all coming in the first half. That ended his streak of consecutive 20-point games at six, tied for the fourth-longest streak by an Illini in the last 50 years. This might not be the worst thing in the world, at least the streak hasn't gotten so big that it became a distraction. The silver lining is that the author has a penchant for finding bizarre silver linings.

Plummer has been a fantastic success out of the transfer portal. His play has helped make the case for Coach Underwood's ability to build a roster, whether through the portal or by recruiting high school seniors. The ability to close on the right players and construct a balanced roster is a skill set the previous two Illini head coaches did not possess. Thankfully Coach Underwood has this skill.

Heat Check #3 - Grandison Is the Fred Couples of College Basketball 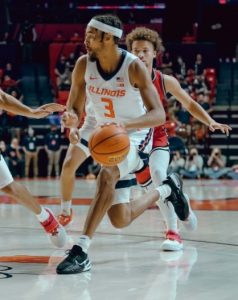 Jacob Grandison projects a cool calmness that is infectious. It's impossible to tell if Grandison is attempting a three-pointer against a tougher than nails Arizona team or if he's shooting against an overmatched St. Francis (PA) team. He sets a magnificent example of playing within himself in pressure situations.

In many ways, Fred Couples was that same type of golfer. A former top-ranked PGA golfer in the world, Couples had a backswing that was as relaxed as anyone could ever hope for. Yet, he could power the ball off the tee like few others could. It's hard to pull that off with a backswing that's so fluid that it looks like Couples could fall asleep mid-swing. Grandison's ability to shoot as if there is no pressure is similar. The younger players on the team would do well to emulate his cool, calculating behavior on the court.

Jacob Grandison also tallied his 1,000th career point on a 3-pointer to start the second half. Grandison totaled 737 points in two years at Holy Cross and has now scored 271 points in two seasons with the Illini, giving him 1,008 for his career. Today, Grandison finished with 18 points, his fourth straight game scoring at least 14. He is now averaging 17.3 ppg over the last four games.

There are many Illini fans who would enjoy hearing Jacob announce in the spring that he will be returning for one more year in an Illini basketball uniform. I am one of them.