The Illini were unable to deal with 6'8", 230-pound forward Donta Scott. The Philadelphia native lit up the Illini for a career high 25 points on 9-12 shooting from the field and 6-7 from the charity stripe. Scott also led the team with 6 rebounds and had 2 assists to go with 1 turnover and no fouls. He was too fast for Benjamin Bosmans-Verdonk to come out and guard him on the perimeter and he was too big and strong for Da'Monte Williams to control in the paint. Scott more than doubled his 12.3 average points per game and keyed a large 40-16 advantage in points scored in the paint against the Illini.

The Illini struggled on the road tonight. They fell in love with the three-pointers on a night that threes weren't falling. At the same time, the defensive intensity didn't carry from possession to possession. To make things worse, rebounding wasn't horrible, but putbacks on Terrapin offensive rebounds prevented the Illini from taking a lead into halftime.

Lou Henson used to have a statement that when paraphrased said that a team plays six bad games every year. Those they usually lose. They play six great games each year. Those they generally win. The rest of the season (approximately 20 games) they play okay and those are the games you have to win. This was a bad game.

The Illini struggled tonight but they're still in the top 3 in the B1G conference. The team is well positioned to compete with games against Michigan State and Wisconsin looming. The key is Kofi's health. What team can afford to lose it's All American who is the King of Double-Doubles? We may not know that answer, but we do know the Illini don't do well without Kofi around.

Baylor is currently ranked #5 and 16-2 and even they have had their troubles this year. They lost two games in a row - at home. To Baylor's credit, the team stopped the losing streak at 2. Illinois will have to do that as well. It's not easy because the availability of Cockburn is in question and Curbelo is returning from a 2-month layoff. There will be some ups and downs, but this team needs to focus on being prepared for the tourney. Peaking at the correct time is a key to erasing the memory of last year's disappointment of the Loyola-Chicago loss.

A good start would be getting Cockburn and Curbelo healthy together and on the court for more than 5 minutes of time.

Heat Check #2 - Ignore Scoring in the Paint at Illini Peril 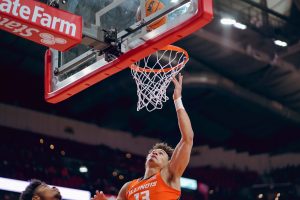 In the first half, Illini guards were able to drive into the lane with a higher frequency than in the second half. The Illini reliance on the three-point shot almost exclusively without any type of threat in the paint made it easier for the Maryland defense to run the Illini shooters off of the three-point line. If the Terps weren't fully successful, they were able to force the Illini to hoist up contested three-pointers. Shooting in those circumstances is very challenging. The Illini were affected as they only shot 26.3% in the second half.

Benjamin Bosmans-Verdonk isn't a classic scoring big man. Neither is Omar Payne. Tonight, both players shot as well as one could expect them to. Bosmans-Verdonk was 3-4 in 25 minutes of play and Payne was 2-3 in 13 minutes of play. Kofi Cockburn wasn't there, and there's no way to fully replace his production, but getting the ball into the lane more often would be an improvement. Give his replacements a chance to score. More importantly, getting the ball into the post more often forces Maryland to defend the lane - and leaves more open shooting lanes for Plummer, Frazier, Grandison and Williams. With more open looks, the Illini can score much more effectively.

The Illini must use what talent their bigs possess to force the whole court to be defended. If Payne is stronger on the pick and roll, find a way to use him more in that role. While Bosmans-Verdonk isn't the quickest a foot, if he can get the ball in the lane, he is an excellent passer who can kick the ball back out to open shooters. The ball has to get into the lane. How it gets there is less important.

Frazier and Plummer can get to the basket and score with the dribble drive as well. They can dish on the way to the basket if they can beat their man and a defender has to leave their own man to help with the driving Plummer/Frazier. No drives mean no pressure is exerted on the Terrapin defense.

The Illini can't ignore the paint. The number of nights that the Illini can rely solely on the three-point shot is extremely limited. The Illini need to leverage their full set of skills to make sure that they can maximize offensive production. It's an easy point to grasp, but not an easy plan to execute.

Heat Check #3 - Curbelo Can't Catch a Break, But He Can Catch the Flu

Coach Underwood noted that Curbelo said he was sick before the game. To be more specific, Coach said the trainer told him that Curbelo had a fever of 100.6 degrees. He also had body aches.

Right now, when it comes to injury, illness and suspensions, if the Illini didn't have bad luck, they'd have no luck at all. Kofi has been out for suspension and now from a concussion. Curbelo has been out 2 months from a concussion. The team has been hit by the flu and COVID. Trent dealt with a shoulder injury. Now Curbelo is sick the game after Hawkins was sick. It's as if the 2021-22 season is a star-crossed season.

The team must focus on the fact that the season isn't over. The team has to find a way to grind through some tough victories as they struggle to get healthy. All efforts need to concentrate on being successful in their next game. Keep stacking game after game. Players need to avoid the big picture, just concentrate on winning on a daily basis. That's all they need to think about.

Coaches have to keep the big picture in focus. They might evaluate if there's any way to spread out minutes as there's no need to run down Trent Frazier, Kofi Cockburn or others physically (or at least any more than they already are beat down physically). The whole point of the season is to be successful in the NCAA tournament. Find a way to use the freshmen for just a few minutes each game. That will pay off for them and the team as they may be ready for an unpredictable role later in the season - and the veterans might save a bit of wear and tear that allows them to play at "full strength" when needed later in the season.

We can also hope the Illini run of bad luck ends. It can't last forever, can it?