The Illinois Fighting Illini used a defense that was beat 'em up, but don't break. No matter how many times they were tested, the Illini imposed their will on the Cavaliers, not allowing a single touchdown as they defeated Virginia 24-3 in Champaign yesterday. The game could not have been much more different than what happened on road last year at Virginia.  Last year, the Cavaliers pummeled the Illini early and often on the way to a 42-14 victory.

The Illini offense started the game in ominous fashion. By ominous, I am speaking for Illinois fans who were expecting the miscues of the team to come back to haunt (or even hunt) the team later in the contest. The first four Illini drives were not a thing of beauty.

There's no way to sugarcoat the fact the Illini were not playing well. Whether it was not protecting the ball or poor execution of plays, there wasn't much for Illini fans to be excited about other than the fact that it was only 3-0 Virginia when the Illini attempted their second punt. Most games with this type of start would have resulted in a much deeper deficit for the Illini to climb out of.

The Illini turned chicken poop into chicken salad after the fourth failed drive. The punt returner made an ill-advised play on the ball, lost it and the Illini ended up with a touchdown as Matthew Bailey recovered the muffed punt in the end zone. The devil is in the tiny details and a bad decision by one player gets turned into 7 points for the Illini. Despite some horrific offense up to that point, Illinois was in the driver's seat with a 7-3 lead. It was a lead that they would not relinquish as the defense would keep handcuffs on Virginia's prolific passer, Brennan Armstrong. 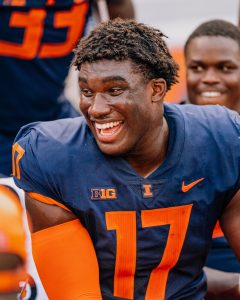 Heat Check #2 - Back Against the Wall Game

The Illini came into this game with a 1-1 record and all the emotional baggage of losing to the Hoosiers. This was a game Illinois dominated in all facets other than the score. With a brutal run of their schedule starting in October, the Illini cannot afford to lose another game. Virginia represented the ultimate test to measure exactly where the Illini program stands. The Cavaliers destroyed the Illini last year. It was time to see which program has moved forward and which program has not. The Illini could not afford to lose another game and they found themselves face-to-face with last year's scariest monster. This year, the Illini didn't blink.

Bret Bielema and his team were facing the one of the earliest "back against the wall games" of this collegiate season. The Illini are looking to break a decade-long streak of losing records and the football program needs to break through decades of fan apathy (that's not good) or fan PTSD (that's worse). Three decades of mostly losing has put this team and this coaching staff in a must win situation. The creation of the scenario has nothing to do with them, but the solution to break through the malaise of the past is fully in their control.

In a game they had to win, the Illini defense came out and held last year's "irresistible force" to 13 first downs, 222 yards of total offense, and 3 points. Conversely, the offense had it's challenges with 4 turnovers, but the team moved the ball, gaining 394 yards of offense, scored 14 points, and Chase Brown had another strong game with 146 yards rushing.

The Illini won decisively when the pressure was on and against a team that had every reason to expect to defeat Illinois. This game was critical to the Illini's success this year. The win doesn't guarantee success, but a win was necessary to open the door for future success. 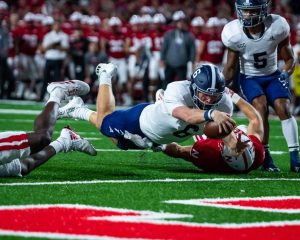 It's still early in the season and it's hard to know if B1G West teams are what they look like they are. In any event, this week was a bad one for the B1G West. Northwestern lost to Duke, Iowa lost to Iowa State, Nebraska lost to Georgia Southern, and Wisconsin lost to Washington State. With these defeats, the only team in the B1G West undefeated is the Minnesota Golden Gophers.

There's a chance that the October slate of games is now not as threatening as it looked on Friday. Wisconsin, Iowa, Minnesota, and Nebraska might all be winnable games. With the defense the Illini displayed on Saturday, they know all the games will likely be close. Maybe the Illini can turn October into a "Rocktober to Remember". Even November looks a bit less threatening with Michigan State, Purdue, Michigan, and Northwestern lined up. Having a fantastic defense makes even the tough games seem winnable.

Winning games like todays game is encouraging and frustrating. The Illini had four turnovers and ten penalties. Those turnovers and penalties are part of the game that drive coaches crazy. They are a reflection of a team's discipline and training. No coach wants to lose in these categories. At the same time, a competent coaching staff will want to see what this Illini team will look like with the defense displayed today accompanied by no turnovers and half the penalties. How much better will the score look?

No one should ever apologize for a victory. At the same time, when you play the better teams - think Michigan or Michigan State - you cannot afford the mistakes that allow teams with excellent talent to gain an advantage without them earning that advantage. When the Illini get these issues ironed out, they could be a force in the B1G West.

With two weeks of practice to get ready for Chattanooga, we should see how much ironing the coaches can accomplish. Maybe the turnovers and penalties are dramatically reduced. Time will tell, but if things are ironed out, things might get a lot more fun than most would have imagined.