The Illini stopped turning the ball over early in the game after committing 6 turnovers in the at the 13:13 mark of the first half with the Illini up 8-7. The Illini only committed 4 more turnovers the rest of the way and outscored the Scarlet Knights 78-44 the rest of the game. Whatever Coach Underwood told his team to stop the turnover barrage should be bottled and saved for future games as the turnover bug has caused the Illini quite a few headaches this season. 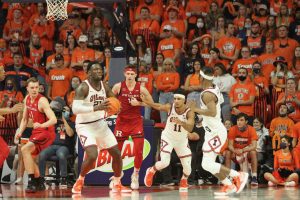 The Illini had much improved spacing and ball movement this game. Kofi Cockburn's willingness to pass the ball to his teammates when double or triple teamed has become a huge problem that opposing defenses have to figure out how to solve. Several times, the Illini All-American passed the ball out of double teams to open wings or guards. Cockburn ended up with 2 assists tonight. Additionally, his teammates might execute one more pass to another Illini who was wide open as the defense could not rotate quickly enough. The Illini shot well - a solid 48.5% from the field and 36.4% from the three-point line - but they didn't shoot the lights out. Yet, they won by 35.

One more pass makes this team much more dangerous because it forces teams to pick what they want to defend. Do they protect the 3-point line or do they let Kofi get one-on-one coverage in the paint? Neither seems like a great strategy to defeat the Illini. 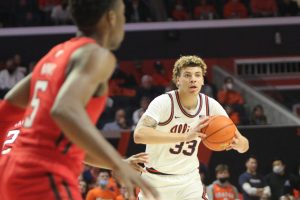 Ron Harper, Jr.'s last three games against the Illini resulted in him scoring 27 points, 28 points and 21 points. Illini fans were prepared for the talented forward to score somewhere between 20 and 25 points Friday night as well. While they won't admit it, the Rutgers staff was most likely anticipating that type of production as well. Someone forgot to send Coleman Hawkins the right script for Rutgers fans.

Instead of another excellent game to go along with a long line of strong performances, Harper, Jr. ran into Coleman Hawkins. Harper, Jr. wasn't quick enough to generate space to separate himself from Hawkins and the sophomore had too much length for Harper, Jr. to easily get shots off. The result was Harper shooting a miserable 1-9 from the field scoring a pedestrian 5 points. He also gathered 4 rebounds.

Hawkins handcuffed the best player on the Rutgers roster and this opened the door to an impressive Illini victory. Coleman was focused on the defensive end of the court and still managed to score 9 points and snare 3 rebounds of his own. It was an excellent effort from Hawkins.

This win featured a team effort across the board. Beyond the headline grabbing 24 points scored by Plummer, the double-double (13 points/15 rebounds) by Cockburn, and Hawkins shutting down Harper Jr., almost everyone made a contribution to the victory:

These offensive results, when combined with stellar defensive efforts, helped produce a 35-point blowout that was both unexpected and a fantastic reinforcement to the players on the importance of playing as one team - on both ends of the court.

Now they have a few days before their first B1G road test - a game in the unfriendly confines of the Iowa Hawkeyes.