The Illini struggled through most of the game against the stubborn Nebraska Cornhuskers. Down the stretch, it was the fifth-year super-senior Trent Frazier who led the team to an 81-81 victory on the road Tuesday night. Frazier scored 20 of the Illini's 35 points in the second half

While Trent was leading the offense against the Huskers, the Illini defense clamped down on the Minnesota three-point shooters only allowing 3 attempts from the three in the second half and only 1 three-pointer to be converted. The Illini also dominated the boards down the stretch. With 16:04 left in the game, the Illini led the Huskers in rebounding 22-21. The rest of the way, the Illini won the rebound battle 20-10 allowing the Illini to pull ahead and win the game late.

The Illini avoided the perils of going into Overtime against the Cornhuskers as last year's team did when Ayo led the way to a stirring Illini victory. 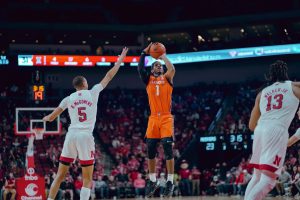 Frazier had a season high 29 points against the Cornhuskers. This was his most in a game since scoring 30 at Minnesota on January 3, 2019, during his sophomore season. It came on a night that Kofi Cockburn had yet another double-double with 16 points and 13 rebounds, but he had to work hard for those stats due to the defensive pressure of Derrick Walker who finished with 14 points and 7 rebounds. It took Kofi 18 shots to get his 16 points and he had a rough night at the free throw line going 0-5 from the charity stripe. Kofi was forced to the bench with four fouls. This is when Frazier stepped up and ran the team the rest of the way. Frazier led the Illini as they outscored the Huskers 16-6 in the last 3:57 of the game.

Frazier did a bit of everything in the second half. Whether it was Frazier playing defense, Frazier driving and making a great pass to Da'Monte Williams to hit a wide open 3-pointer or Frazier scoring himself. One cannot underestimate the desire to win of this particular fifth year senior. Tonight, he was needed to make sure the win became reality. He elevated his game and made sure the Illini walked left Lincoln with a W.

Omar Payne has been a mystery to Illini fans. He was a highly ranked center coming out of high school. Payne was ranked roughly equal to Kofi Cockburn, but his results at both Florida and Illinois haven't reached those levels, yet. 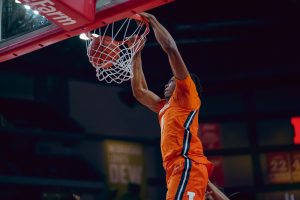 Reports out of practice are common saying Omar has looked excellent in practice. He's able to hold his own against All-American Kofi Cockburn. Yet, in games, he hasn't been able to replicate his practice accomplishments in games. Tonight, Payne was able to put together a game that not only allowed Coach Underwood to keep an exhausted Kofi Cockburn (who was also saddled with 4 fouls) on the bench as the Illini outscored the Huskers 16-6 to win the game, but his performance also gave Illini fans hope that the Illini aren't in danger of losing every time Kofi sits on the bench.

Payne played 10 minutes and scored 8 points, had 5 rebounds, and 4 blocks in 10 minutes. The combined stat line from the Illini center position (adding Kofi and Omar's totals) was 24 points, 18 rebounds, and 5 blocks. That type of stat line will win a lot of games.

Coleman Hawkins demonstrated the athleticism and hustle that makes Coach Underwood predict he'll play in the NBA. When Hawkins comes off the bench with the energy he displayed tonight, he is a huge difference maker for the Illini. In thirteen super-active minutes, Hawkins had 4 points, 8 rebounds, 1 blocked shot and even better - no turnovers. If Hawkins knows he's going to play 10 to 20 minutes a game - he can totally amp up his energy level and bring to bear the physical tools that few can match. The key is to play this hard each game.

Hawkins has the chance to be a sixth man that forces other teams to adjust their lineups in order to deal with him. By playing hard and consistently putting forth that intensity, Hawkins could also set a fantastic example for the three freshmen. This Illini team is a veteran team and it will be hard for any freshman to get big minutes barring an unfortunate injury. Thus, if the freshmen understand they're not playing extended minutes, they then can afford to give everything they have for a short period of time. Get in the game, hustle, play hard and make a difference and then get out. Fatigue isn't an issue. Making a difference is.

Heat Check #3 - The Illini are on a Massive B1G Roll 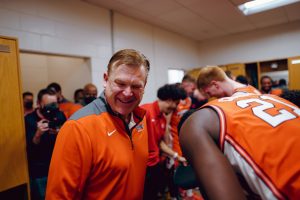 Brad Underwood is building a B1G juggernaut. He's upgraded the Illini roster exponentially from the one he inherited. The team has a culture based on hard work and defense - but they play offense at a pace that will ensure the talent pipeline stays full. More importantly, take a look at the streaks the Illini are on right now, especially in the B1G:

The next hurdle for Coach Underwood is to get one of his Illini basketballs team to make a solid run in the NCAA tourney. A Sweet Sixteen appearance would be a start for this year's team. A Final Four run would be even better.

Let's see what this Illini team can accomplish over the course of this season and this year's post season. We can compare their accomplishments to those of past Illini teams. We will see what the future has in store for the Fighting Illini. It should be fun.