Former Illini coach John Groce had a term that he used called "Energy Vampires". I never really bought into a lot of his sayings and motivations like ten toes in and various ladders. That said, this Penn State team is what I call a whole pack of Energy Vampires. They exist to drain the energy out of opposing offenses. They showed up in full force to do their best to suck the life out of the Fighting Illini. They nearly succeeded.

The Fighting Illini played a game Penn State team that was determined to not allow Kofi Cockburn to beat them. They dared Jacob Grandison and Da'Monte Williams to beat them with 3-pointers. Combined Grandison and Williams went 6-14 from the three-point line and the Illini squeezed past the Nittany Lions 60-55. Tonight’s game had just 57 possessions, the fewest in an Illini game since Jan. 31, 2017 (Wisconsin, 56).

Williams led the Illini with a season high 14 points as the Illini improved their record to 21-8 overall and 14-5 in the B1G. In the unlikely event that Nebraska upsets Wisconsin, the Iowa game in Champaign on Sunday could determine whether the Illini can earn a share of the B1G regular season title.

Penn State has brought out the worst in the Fighting Illini offenses over years. The last Illini team to score over 79 points twice in a season against Penn State was none other than the 2005 National Championship Runner Up team featuring Dee Brown and Deron Williams. That team throttled the Nittany Lions twice 90-64 and 83-63. Beyond that year, the Nittany Lions have slowed up the Illini a variety of ways - and of course the poster game for horrible offense was the loss to PSU in 2009 by a horrific 38-33 score. That loss is a game that will live forever in infamy for Illini basketball fans. 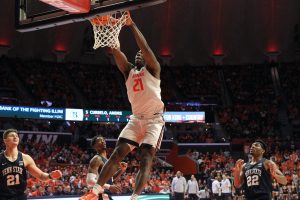 This year, Penn State managed to slow down the Illini in an attempt to steal a game at the end. This is the same tactic that resulted in close losses to Wisconsin (51-49) and Ohio State (61-56). The Nittany Lions kept Kofi from getting the ball by playing off of anyone not named Trent or Alfonso and used defenders sagging into the lane to "half-front" Kofi making the entry passes very difficult.

Fortunately for the Illini, Grandison and Williams were effective enough to provide the Illini with a lead and Coleman Hawkins' 4-4 free throw performance down the stretch was enough to ice the game away. It wasn't a pretty game, but this win counts for the same amount as big margin victories over Minnesota or Wisconsin did, each is a single victory. Sometimes in the B1G, you have to be happy for the win and get ready for the next team on the schedule. Next up is Iowa in the midst of a red-hot shooting streak. 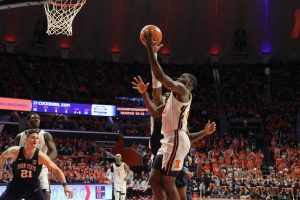 Da'Monte Williams has played in 155 games for the Fighting Illini. Last night, he led his team in scoring for the first time. It wasn't because he was trying to "be the man" but it was because the Nittany Lions coaching staff took a look at the statistics and decided that it was more dangerous to let Kofi Cockburn get an entry pass to set up a potential layup or dunk than it was to let Willliams, or Coleman Hawkins or even Jacob Grandison, shoot relatively uncontested.

Da'Monte made sure that the Nittany Lions would pay for that decision. The Penn State staff made a calculated choice to see if Da'Monte could beat them. Da'Monte didn't get mad. He didn't get upset. He responded by doing his job. Da'Monte went 4 for 10 from the three and keyed the Illini offense to a narrow, but well-earned victory over the disciplined but undermanned Nittany Lions.

This was another strong showing from the Swiss Army Knife of the B1G. If the Illini need a rebound, chances are that Da'Monte will grab it. If they need a key three, he's got a good chance of being the man knocking it down - or passing to the guy who is open. Da'Monte is a team player and tonight he showed another aspect of that ability to find ways to contribute to an Illini win. 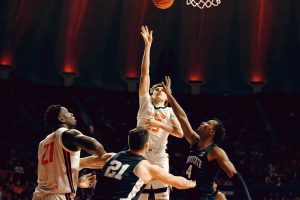 Coleman Hawkins went 0-4 from the 3-point line when the Nittany Lions "dorked" him (that means they let him shoot without defending him). Unlike the veteran Da'Monte Williams, it got into Coleman's head. That didn't stop him, though. He went 4-4 from the free throw line, making 2-2 free throws with 0:11 seconds left, and he shot 2-2 again with 0:03 seconds left. Talk about facing up pressure and having ice water in one's veins. He had a hustle-based offensive rebound of a Trent Frazier free throw miss to set up the first set of free throws. Coleman's aggression and confidence is growing.

Omar Payne had a nice spin move to score. This wasn't an alley-oop basket or some sort of lob entry, but his own offense. That hasn't happened for quite some time. Additionally, he managed to play four minutes without fouling.

Omar staying on the court is critical to the team's success. If Payne could play just 5 minutes a half, it would give Kofi valuable rest time and keep his minutes around 30 a game. This keeps his legs fresher, and he can play in a more explosive manner that Illini fans have grown to enjoy watching.

The Fighting Illini's next opponent Iowa looked strong on the road against Michigan. They took a big lead early and were able to coast to a surprisingly easy 82-71 victory in Ann Arbor. This was the 5th win in a row for the Hawkeyes.

Iowa is led by B1G Player of the Year candidate Keeghan Murray, but they are the highest scoring team in the B1G and the 5th highest in the country. They're peaking just in time to come to Champaign for the regular season finale on Sunday night at 6:30 pm on FS1.