The Illini were upset by an Indiana Hoosiers team that was aiming to "guarantee" their team a bid into the NCAA tournament. With a victory over two teams presumed to be in the tournament, Illinois and Michigan, the Hoosiers appear to have attained their goal. The Hoosiers' next step is to measure themselves against the B1G's hottest team, the Iowa Hawkeyes.

The next step for the Illini is less glamourous and most likely more important to the future of this year's Fighting Illini basketball team. The Illini need to do two things that on the surface appear to conflict with one another:

The Illini shot poorly from the field and from the free throw line - and they lost by 2 points. There's no need to panic, but there's reason to be concerned because the Illini offense has been unreliable over the last month. It could be said that the trademark of the Illini offense are the long scoring droughts that have let teams back into multiple games. That needs to stop in the NCAA tournament. 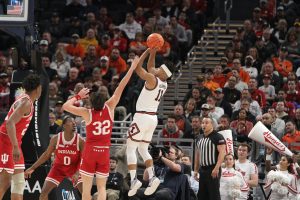 The Illini didn't shoot well today. They were 20-56 overall for a disappointing 35.7% from the field as a team. If you look at the guards alone, they had a horrible night, shooting 7 of 29 for 24.1% and 4 for 14 from the three-point line. The Illini will not win many games with this type of shooting accuracy out of their guards.

We also watched both Da'Monte Williams and Alfonso Plummer pass up open looks late in the second half of the game. For Williams, we haven't seen that in few games, and we hoped that was a thing of the past. Seeing Plummer pass up open shots, is a relatively rare occurrence. For those who think Plummer has no conscious when it comes to throwing up a shot, your assessment of him has been rendered as incorrect. Apparently, making one shot in the first 30 seconds of the game, followed by 1 more shot the rest of the half and going 0-for the second half will make anyone decide to pass up an open shot. Plummer has a conscious, folks.

Heat Check #2 - Coleman Hawkins is Back and Better than Ever

Coleman Hawkins appears to have risen above the challenges he faced earlier in the B1G season. His erratic play on both ends of the court and tendency to get into foul trouble ended up costing him the most valuable asset a player can have - playing time on the court. With less confidence in Hawkins coming from the staff, his minutes were reduced, and Hawkins was frustrated and pressing to do well to the point of limiting his own effectiveness. 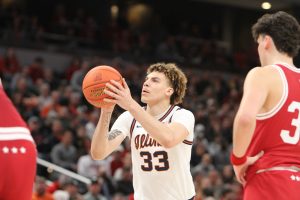 The Coleman Hawkins that we saw yesterday was the Coleman Hawkins that Brad Underwood has said will play in the NBA someday. Hawkins scored a career high 18 points on 5-10 shooting and shot 4-7 from the three-point line. Hawkins didn't stop there. He added 4 rebounds, 2 assists and 2 steals. While the steam struggled to score, Hawkins was an efficient offensive weapon that provided a ray of hope for the NCAA tournament and the future of the Fighting Illini basketball program.

Andre Curbelo also had a huge effect on the game. His highlight reel pass to Coleman Hawkins was amazing and is already a clip that is being seen nationally. Curbelo had 10 rebounds, 4 assists, 1 blocked shot and 1 steal - only with only a single turnover. The only issue he had was his shooting, which is what you expect from a player who's had such a low number of practices as Curbelo has had this season.

Historically, Curbelo is a good finisher at the basket and has an erratic jumper. He's struggling closing the deal at the rim. That's simply a repetition issue. Like the rest of the guards mentioned above, he's got a few days to find a groove and gain a bit of confidence. Right now, it's a bit like a golfer trying to get the right groove for his swing.

Beyond challenges scoring, Curbelo's defense is much improved, his rebounding makes a huge difference in games, and he can control the pace of the game. The key for Curbelo is to be disciplined enough to take what the defense gives him. When he does that, it's a great sign for the Illini basketball team. 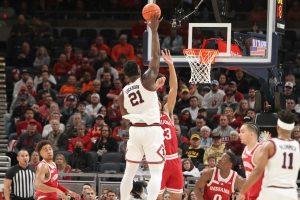 Despite this loss in the voting booth, Kofi was more than willing to display why many believe he's the best in the B1G. While the Illini came up 2 points short in their efforts today, Kofi had yet another double-double effort in defeat and was able to efficiently score points for his team despite their offensive struggles.

Needless to say, Kofi had 10 rebounds along with 2 blocked shots. He contributed at both ends of the court. In typical Kofi fashion, he played while tired, as he played 33 minutes. If anything, during a few of the Illini's offensive dry spells, it might be advisable to try to force the ball into the big man to see if his pure size and force of will could be a way to minimize the length of the Illini's confounding dry spells.

Wisconsin also lost today. The Badgers were kind enough to make sure that both of the B1G co-champions are out of the running to win the B1G tournament title. Johnny Davis had a bad day in their 69-63 loss to Michigan State. He had a very bad day.

Davis shot 3-19 from the field and went 0-6 from the three-point line. Davis did go 5-6 from the free throw line to end up with 11 points to go with his 11 rebounds and 3 assists, 3 turnovers and 1 steal. Taking 19 shots to score 11 points is a terrible game. Davis tends to have lower lows that Cockburn and that's why the IlliniGuys staff voted narrowly for Kofi to be the B1G Player of the Year.

If the B1G tourney had any lessons to be learned, it might be that the IlliniGuys were the only group of voters to pick the real B1G Player of the Year.