Tonight, the Illini defeated a stubborn Iowa Hawkeyes team 87-83 in a battle that had some crazy stat lines. What do I mean by that? Check out these scenarios:

All three happened and the 26 points off of turnovers kept the Hawkeyes in the game until the bitter end - at least for Hawkeye fans. But, happily for Illini fans their Illini won the game.

Heat Check #1 - Kofi Cockburn has Improved his Game - a Lot 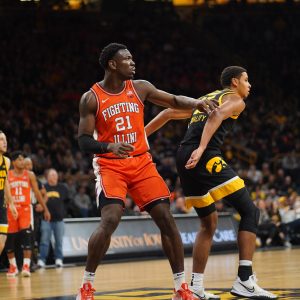 Kofi Cockburn crushed the Hawkeyes for 18 rebounds - including 5 offensive rebounds. He didn't have any assists today but that was because he had folks miss open shots when he hit them with the good pass. If this was hockey, where the next pass allows an assist to be counted Kofi would've had a few. The Illini did move the ball well at times.

When Kofi is passing out of the post effectively, the Illini are a very hard team to guard because you cannot leave Kofi alone in the lane. The Illini went 11-25 from the 3-point line with Plummer and Grandison hitting four treys each and Frazier hitting three. Kofi forced players to double down on him and it gave the Illini shooters a half a step more of space to shoot. The Illini sharpshooters took full advantage of this spacing.

Kofi was fouled many more times than the referees blew their whistles. Touch fouls that allowed other players to go to the line were not there when Kofi was getting hammered. Unlike past years, the "hack a Kofi" strategy is too dangerous to employ repeatedly as Kofi made 5-6 free throws and is averaging over 70% from the free throw line this year. In typical Cockburn fashion, he didn't let the lack of calls bother him. He didn't get angry. He just got even - in the form of endless rebounds on his way to another double-double as he scored 17 and snagged 18 rebounds.

This is a Kofi Cockburn who has worked hard on his game - both mentally and physically in the off season. He's proving he can be even more of a force in college basketball than he was last year when he was a second team All American.

In one of the toughest road venues in the B1G if not in the nation, Plummer, Grandison, and Frazier elevated their games when the Illini needed them to do so. 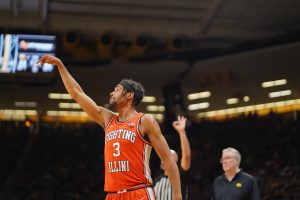 Plummer did a bit of everything. He hit 4 of 8 from the 3-point line. He was 6-11 from the field overall. He used his dribble drive moves to penetrate the lane - this is becoming a habit. Down the stretch, he did a great job continuing to be the "ice man" at the free throw line. He hit 5 of 5 from the line and he has yet to miss a free throw this season. Down the stretch, those free throws helped keep a hot shooting Iowa team at bay.

Grandison was able to hit 3-point shots as well, going 4-9. He didn't let missed shots bother him. He followed up an air ball miss from three on his next shot with a made 3-pointer that was nothing but net. That's not easy to do. Grandison manages to keep an even emotional keel no matter what is going on out on the court.

As a 23-year-old player who plays on the Finnish National Team, very little seems to bother Grandison. During stressful times on the court, his teammates can look to Jacob to reassure themselves and give them an example of the calm they can try to imitate. Leadership by example is an important trait on a team and Grandison does this well. To demonstrate this, Grandison hit 5 of 6 free throws to finish with 21 points.

Trent Frazier did his usual work of playing great defense, bringing the ball up as a sometimes PG, and hitting key 3-pointers and free throws. Trent hit 5 of 9 from the field, 3 of 5 from the 3-point line, and 5 of 6 from the free throw line to score 18 points. He did have a higher number of turnovers due to the Iowa pressure (5) but many times when he was the shortest player on the court, he somehow managed to grab 8 rebounds to only trail Kofi Cockburn who had 18.

Frazier led all players with 37 minutes played during the 40-minute game. The Illini can't afford to take Trent off of the court.

When one looks at the 18 turnovers, it's clear that Andre Curbelo is missed. Sure, he'd have a few turnovers if he had been healthy and able to play. It must be mentioned that Curbelo would also have three or four lob dunks to make the SportsCenter plays of the day list after breaking the Iowa press. It's clear that pressure defenses bother the Illini, and they need to be prepared to face more presses as the B1G season progresses. The coaches in the B1G will do everything they can to attack weaknesses and attacking the Illini ball handlers is a heck of lot easier than attacking Kofi Cockburn in the paint.

Let's hope for a complete and healthy recover for Belo sooner rather than later. This is a top 15 team without Andre Curbelo. With him, they can compete for the national title.