The Illini faced an athletic but ultimately weak shooting Maryland team on Thursday night. Without the referee whistles putting Kofi Cockburn in foul trouble in the first half, causing Coach Underwood to bench the All-American for the last 10:34 of the first half with the Illini up by 21-8, tonight's game would've been over by halftime. As it was, the Illini had to fight against a team with tall wings that could focus on pushing the Illini off of the three-point line for the majority of the first half. The Illini shot a pathetic 31% in the half and were down 34-30 at intermission.

In the second half, the touch fouls on the Illini bigs stopped drawing the whistle and the game pivoted back to the way it began for the first 9:26 of the game. With Kofi in the middle, scoring and rebounding with abandon - and hitting the open Illini shooters - the Illini outscored the Terrapins 46-30 to cruise to a 76-64 win. The Illini were outshot 20 attempts to 18 at the free throw line but shot a sizzling 51.5% in the second half. Too much ball movement and too much Kofi sank the Maryland attempt at an upset.

Kofi Cockburn is staking his claim to both the B1G Player of the Year (POY) and the National POY. After 4 B1G games, the Illini All-American is averaging 20.5 points per game, 15.3 rebounds per game. All this while shooting 56.9% from the field and 77.4% from the free throw line over those first four B1G games. 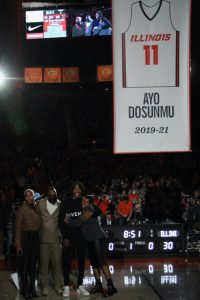 Ayo Dosunmu was honored at the half for his illustrious three-year career with the Fighting Illini. The Bulls 2nd round draft pick is experiencing an excellent rookie season in Chicago. He is becoming the NBA face of the Illini just like he was the face of the Illini in the collegiate ranks. For prospective players, seeing a rookie exceed expectations and then give some of the credit to his college and his coaches is refreshing. It's also great for Illini recruiting efforts as well.

For up-and-coming players in the Chicagoland area, Ayo should be the best possible example of how to construct a professional career, particularly when you consider the implications of the NIL rules. A player who is a Chicago native can quickly capitalize on his Illini stardom and be a big draw for a prospective business wanting to pump up their image.

In needs to be noted that Ayo made the choice to come and play for the Illini when it wasn't cool, when Coach Underwood was selling little more than hope, and when the Illini program was at an unusually deep trough in the basketball program's history. Without Ayo, there's probably no Kofi. Take away Ayo and Kofi and as even as great of a coach as Coach Underwood is, it would be a much more challenging situation that he would be facing. There's little doubt that Ayo is the face that turned around this place - and this place is the Fighting Illini basketball program.

It was great getting to see his uniform go up to the ceiling. Congrats Ayo!

Heat Check #2 - The Monster that is Kofi 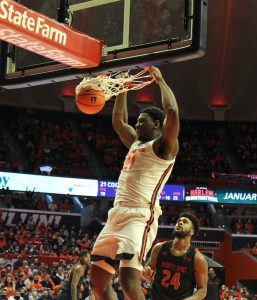 Kofi is evolving into an unstoppable force on the basketball court. He finished the Maryland game with 23 points and 18 rebounds. This is a fantastic stat line for any player on any day. This was Kofi's seventh double-double in a row, including all four B1G games.

What makes it even more amazing is that due to foul trouble, Cockburn only played 8 minutes in the first half. He went for 16 points and 15 rebounds in the second half alone. In the second half, Kofi managed to outrebound the Terps 15 to 10, all by himself. What will he do next? Illini fans can't wait to see.

Kofi's results put him squarely in contention for the National Player of the Year award. He is one of just two players in the NCAA this season averaging at least 20 points and 10 rebounds per game along with Jamal Cain of Oakland. The last Illini to average 20 & 10 was Nick Weatherspoon in 1973. He averaged 25.0 ppg and 12.5 rpg.

Currently, Cockburn is the nation's 2nd leading scorer at 22.5 ppg and ranks third in rebounding at 12.5 rpg. 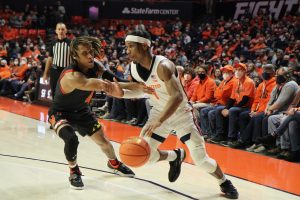 Against Maryland, the Illini's inside-out game was in on display again. Kofi led the scoring parade with Trent Frazier hitting 16 points going 4-11 from the three-point line and Alfonso Plummer adding 12 points.

While neither Frazier nor Plummer were hot the whole game, Frazier went on a one-man scoring binge that reversed the game's momentum permanently. With the Illini down 47-46, Frazier hit made a layup followed by not one but three three-pointers in a row - and a one-point deficit was a now a 57-50 Illini lead. Frazier's solo 11-3 run against Maryland essentially ended the game.

The fourth head of the Illini scoring monster, Jacob Grandison, had a rare night where he was cold from the field. He only had five points on 2-12 shooting. He has scored over 10 points in 5 of his last 7 games. Despite his rough night against the Terps, the Illini were able to score 76 points and win the game even with Kofi playing only 8 minutes in the first half.

With a few different referee calls and some beneficial rolls of the ball for Grandison, this game could've been a blowout.

Trendlines are looking up for the Illini as the B1G schedule progresses.