Tonight, it was a rare evening where the basketball team made headlines by coming off of a COVID pause looking at least as strong as they looked before the pause. At the same time, it appears that Illini head football coach Bret Bielema made a bid to steal the media spotlight by reportedly parting ways with offensive coordinator Tony Petersen. This move addresses the offense-based deficiencies which prevented Illini from going to a bowl game in Coach Bielema's first year in Champaign-Urbana. 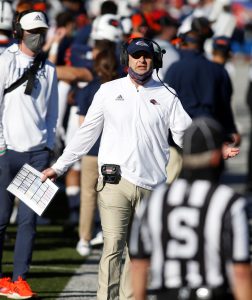 Thursday night, Bret Bielema relieved Tony Petersen of his duties as offensive coordinator. As Matt Stevens, IlliniGuys Beat Writer noted earlier this evening: "In Bielema’s first season with the Illini program, Petersen’s offense was last in the 14-school Big Ten Conference in passing offense, 11th in scoring offense, 10th in total offense and seventh in rushing offense. Illinois, which finished this 2021 campaign with a 5-7 record but scored less than 20 points in seven of those games, finished tied for 115th among 130 Football Bowl Subdivision teams in scoring offense and 112th in total offense." Translation - the offense had to improve for the team to have a better chance to earn its way to a bowl in 2022.

This move opens the door for Coach Bielema to upgrade the offense at the same time as the team is welcoming Tommy DeVito a transfer portal quarterback from Syracuse. The timing couldn't be better as the Illini return a defense that shattered expectations this season. It also means the program had to buy out Coach Petersen after the first year of his three-year deal. It is clear that the Athletic Director and head coach are in lock step to move the program forward. Fan response to this action was immediate and positive.

It has been confirmed that Bret Bielema has met with UTSA associate head coach/offensive coordinator/quarterbacks coach Barry Lunney, Jr on Tuesday. Lunney, Jr. is a former Razorbacks quarterback who worked with Bielema in the past as tight end coach during Bielema's Razorback head coaching tenure. If Coach Bielema needed to see more of Lunney, Jr.'s work results, he had a front row seat to watch UTSA's 12th ranked offense in action this season as they rolled up 497 yards of offense and scored 37 points on the Illini.

Hiring coaches, like recruiting is fluid. The Illini have proven they're willing to make the decisions that the top teams make. If you don't win or achieve enough, it's time to seek out those who can attain the goals of the coach and the Athletic Director. This is the type of move that will help the program advance much quicker than staying pat and waiting for a contract to end after three years.

IlliniGuys.com will cover this situation and report on it as soon as news breaks. Keep checking in for updates.

Heat Check #1 - How About This for a Team Effort 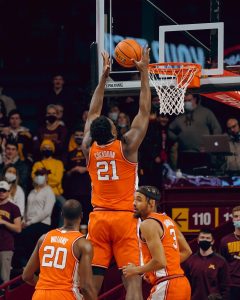 If you would've told me Trent Frazier and Alfonso Plummer were going to combine to shoot 1 for 7 from the 3-point line on the road at Minnesota, I'd have told you the game would be a close win for the Illini. My assumption would be that Kofi would carry the day (and in fairness, he did just that).

At the same time, the rest of the Illini hit 5-7 on their 3-point attempts to help the Illini blow the game wide open. Da'Monte Williams looked like his old nation-leading self as he went 3-4 from the 3-point line. He shot with that silky-smooth form that reflects the confidence he had last season. Jacob Grandison hit his normal 2-2 from deep, as he managed to score 11 points on only 5 shots. He's an amazingly efficient offensive player.

The team also totally dominated the Golden Gophers on the boards by a massive 52-26 margin. Doubling up a team in rebounds is an impressive feat. To put the rebounds in context, each offensive rebound is essentially an additional Illini possession or another chance for the Illini offense to score. Offensive rebounds can break the spirit of the defense and the Illini snared 13 of them. The defense works hard, makes the offense miss a shot, only to give up an offensive rebound which forces them to play more defense.

On the other end of the court, 39 defensive rebounds are the end of a possession for the Golden Gopher offense. Having possessions end that way is demoralizing as no points are scored and the reward for failing to score is "getting" to play more defense. Let's face it, most players don't look at more defense as a good thing. The Illini used their rebounding advantage to force their will upon the Golden Gophers and it contributed greatly to the 76-53 blowout on the road.

Roadkill is becoming a familiar term to Illini fans. The Illini have won their 8th straight B1G win away from home and their 5th straight B1G road win, going back to the Michigan State game in which Ayo had his nose broken. 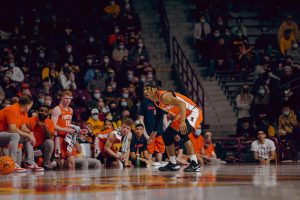 No one doubts that Coach Brad Underwood is a tough, old-school style head coach. He teaches an aggressive defensive style that relies on players who are willing to do whatever is necessary to contest every shot and make sure that each made basket is earned. In last night's game, most of the focus was on Kofi's dominant game (29 points, 10 rebounds, 4 blocks, 2 assists, and 2 steals), the massive rebounding advantage 52-26, and the three-point shooting accuracy of the team on a night that Frazier and Plummer weren't hitting.

This type of defense is in a large part a choice that is made by the players to focus their efforts and play with an intensity that is no random accident. From Kofi Cockburn chose to block shots like an All-American volleyball player spiking a hapless volleyball. Jacob Grandison correctly read a situation chose to come over and help a teammate at the last second. Coleman Hawkins contested shots and forced players to alter their shooting form. Trent Frazier chose to fight through picks like a defensive lineman rushing past his blocker. Defense is no accident. This team has committed to playing it well.

Coach Underwood has his team playing better than they did at the start of the season. This is something that Illini fans are used to and enjoy. Usually, the Illini end up playing better in March than they do in January. If that happens this season, this is an Illini team that will make a lot of fans, media, and other teams look pretty foolish for underestimating them.

Next up, Maryland at home on Thursday night.