Hoosiers star Jackson-Davis withdraws from draft, will return to Indiana for senior season 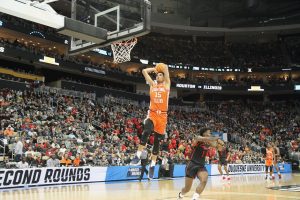 The Illini lost to the Houston Cougars 68-53 in a game that was much closer than the final score. Less than a minute after a controversial technical foul was called on RJ Melendez for hanging on the rim, the Illini were down 49-45 with 7:45 to go in the game. From that point on the Illini were outscored 19-8 as the Cougars caught fire on both ends of the court. The Cougar defense had been the engine for the victory throughout the entire game, but the offensive outburst to end the game allowed the Cougars to be on cruise control as time elapsed.

After the upset loss at the hands of Loyola Chicago last March, no one suspected the crazy year that the Illini would go through. Let's take a trip down memory hell and we'll keep it to just the highlights (lowlights?): Ayo left for the NBA Draft; all three assistant coaches left for positions at Kentucky and Gonzaga; Kofi tested NBA Draft waters, withdrew, entered the transfer portal, and ultimately stayed a Fighting Illini; Coach Underwood hired a new staff, Kofi gets suspended by the NCAA, Frazier injures shoulder, Hutcherson out for the season, Curbelo gets concussion, team gets the flu, team has covid, Kofi gets concussion, Melendez has appendix removed, Grandison gets shoulder injury, team members get pinkeye. That's just most of what we know about. We have no clue of the normal nagging injuries that players fought through. 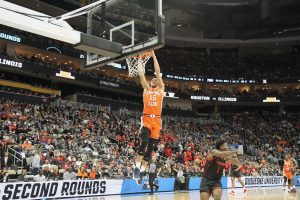 It seemed like every time one fire was put out, another would spring up. Coach Underwood and the staff were playing a fireman's version of whack-a-mole. No matter how much water was used or how many fire hoses were aimed at a fire, another fire would pop up somewhere else. This happened to the very end as facing the Cougars Trent Frazier was clearly having vision issues with visible swelling around his left eye and Jacob Grandison struggled to play with a painful shoulder injury suffered in the B1G tourney.

This Illini team won a B1G title with a 15-5 record somehow making it through a killer B1G schedule with a variety of missed games and with players playing hurt. The heart of the team has never been in doubt. No matter how up and down the shooting might be on any particular night, the team comes to play defense and that trait helped them make it through a crazy season by anyone's definition.

Illini fans can be hopeful that next season should be a literal cakewalk considered to what the team experience this season from a health and game availability standpoint.

Over the course of five years, with their fifth year possible due to the extra COVID-19 year of eligibility granted by the NCAA, Trent Frazier and Da'Monte Williams have taken the Illini from the rocky era of Illini basketball irrelevance to today's reality where the Illini are now being attacked by the national media for underperforming in the NCAA tournament. To my eyes, these two seniors and Coach Underwood have undertaken the same quest that Lou Henson had to embark upon in the early 80s. 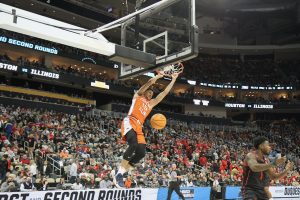 Henson's Illini returned to postseason tournaments in 1980 after the team hadn't been in a post-season game since 1962. In 1980, the Illini finished 3rd in the NIT (which meant something back then), then an NCAA Sweet Sixteen appearance in 81, an NIT 2nd round run in 82, and an NCAA first round appearance in 1983. The program had questions about staying power and effectiveness as they bounced back and forth between NIT and NCAA bids and having Illini postseason success diminish as the years passed.

The Illini made the Elite 8 in 1984 and lost on one of the most controversial no calls of all time, when Dickie Beal travelled, and it wasn't called on Kentucky's home court. From that point on, Illini basketball began to be relevant in the eyes of the national media. There were ups and downs along the way, but the Illini had an 8-year NCAA streak built and a Final Four appearance before an NCAA investigation derailed the program.

Under Underwood the Illini have made it to the NCAA tourney two years in a row and in his third year an NCAA tourney appearance was nullified by the COVID pandemic. The program is finally at the point where the Illini are the team with the best record in the B1G over the last three years and has won a B1G tourney and a B1G regular season title in the last two years.

None of this could be done without a dynamic coach with a plan and the ability to execute that plan. Of course, no coach wins without players like Trent Frazier and Da'Monte Williams. Two players who've done just about everything their coach has asked of them. Whether its Trent Frazier logging over 1000 minutes largely guarding the opponent's best scorer or if it's Da'Monte Williams playing in the post against players who stand at least 6" taller than he. Players like this build a winning culture that lasts long after they've left the program.

It's the start of a bold new era of Illini basketball. To Brad Underwood, Trent Frazier and Da'Monte Williams the only message I can convey is my heartfelt thanks for the journey that they've undertaken to carry the Illini basketball program out of the wilderness of mediocrity and back into national relevance. Thanks guys!