An acronym for Celebrating Loyalty and Achievement for Staying in School, the Senior CLASS Award focuses on the total student-athlete and encourages students to use their platform in athletics to make a positive impact as leaders in their communities. To be eligible for the award, a student-athlete must be classified as an NCAA Division I senior or graduate student and have notable achievements in four areas of excellence: classroom, community, character, and competition. 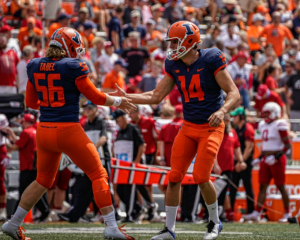 Hayes did one of the most creative philanthropic efforts in college football in 2021, donating to the Robert Connor Dawes Foundation's Connor's Run to support research for brain cancer in children for every punt he landed inside the 20-yard line. Hayes accepted matches to his donation and raised over $5,000 for the Foundation.

Hayes is now preparing for the NFL Draft. He was rated the No. 5 NFL Draft punting prospect in the nation by Mel Kiper during the preseason.