Guy to Keep an “I” on - Cooper Starks

At only 16  years old, Girard, Illinois native, and All State lineman Cooper Starks stands at a towering  6’5 and weighs in at 320 pounds as he enters his junior season of high school. Cooper is the star offensive lineman of the North Mac Panthers. The Panthers are a 2A/3A program from the consistently powerful Sangamo Conference in the greater Springfield area. He was a starter in his sophomore season. 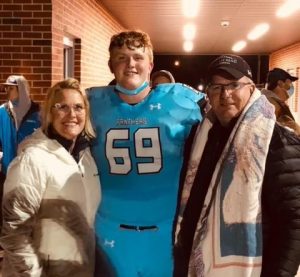 At only 16 years old, this massive offensive tackle's stock has just begun to rise. This reporter believes Cooper has an exciting road ahead of him on the recruiting trail. His stock could rise much higher based on his size and potential. The towering junior is already planning on taking a visit to Miami of Ohio in September, and had drawn interest from several programs, including Bret Bielema's University of Illinois staff, who invited him to camp over the summer. They have stayed in touch with him, as much as permissible, with Cooper being a 2023 prospect.

Cooper is very intrigued at the thought of playing football close to home, with Champaign only an hour and a half from Macoupin County. “Being that close to home would be crazy. It would be so nice to have my family be able to come to the games easily, being that we live so close.” said Cooper.

With this new Illinois staff wanting to make a huge emphasis with in-state recruiting, I asked Cooper what he thought of the Illinois staff taking interest in him, what he thought of Illinois overall as a program, including O-Line coach Bart Miller and head coach Bret Bielema. “Camping at Illinois was a great experience. It was crazy honestly. I really like Coach Miller and coach B. And  I think Illinois is making a comeback, and the buzz around that program is awesome right now,” Starks says.

Like all kids who played last season, no summer camps, a shortened season, and no playoffs have taken a toll on their recruitment. Cooper is in a situation similar to Joliet Catholic's Jordan Anderson. Many other athletes also slipped under the radar last year and will see huge explosion of recruiting over the course of the next season. If camp season happened last summer and a full season had been played in the spring, Cooper Starks would be sitting with several Division 1 offers at this point. The film does not lie, and the measurables are there, its just a matter of exposure at this point.

Cooper was able to become an All State offensive lineman in only an span of 6 games at 16 years old during the abbreviated Spring season. If Cooper had been able to log a full season as a sophomore, he would've earned accolades that would've amped up his recruiting even more.

Even more impressive for Cooper is his GPA. Cooper has been a star in the classroom as well - with a 4.3 GPA. Schools love a player that can help the team improve it's collective GPA and Cooper is that player, too. It’s just a matter of bad Covid timing that has challenged recruiting for many high potential juniors. Cooper and many other stars are going to field numerous offers once the season starts.

Bret Bielema is famous for building a brand of tough football based on a gigantic and ferocious offensive line. With the Illini brand being built around the offensive line, Coach Bielema can't have too many massive offensive lineman. Starks is the type of guy that would fit well into that Bart Miller Offensive Line room.

When asked if he could describe his game, Starks tells me “I’m a brawler, I love to be aggressive and pancake people, and run them off the ball.” When evaluating his film, its very apparent that Starks possesses a high degree of self awareness. It's clear that Offensive Line Coach Bart Miller will enjoy having another big offensive lineman looking for playing time and someone to hit.

To be fair, Starks is only 16 years old. He is still raw and has parts to his game that he would like to improve upon.  He noted as much in our discussion, “I want to improve my speed during the game for sure, reading defenders better, and be better at the small technical things that make lineman better - like hand placement and my steps.”

Personally, I believe Cooper has great lineman film. Again, he is raw because of his age, so high pad level and small technique critiques can be pointed out. The sheer strength and tenacity demonstrated by Starks is the next level. 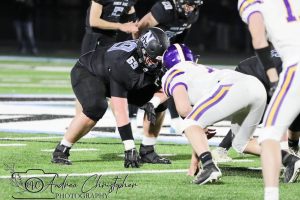 When Cooper fires out of his stance, he comes out with a vengeance, with a powerful first step and first hand placement. When offensive lineman fire off the ball, one of the most important steps of the process is the very first punch to the body of the defensive lineman or linebacker he is facing. This punch throws off the balance of the opposing player, and forces them to stall in place. Cooper does a very good job of this, getting his defender to pause, then using his massive frame and aggressive play style,  Starks finishes blocks like a bully.

For reference, Cooper finishes most of his blocks at 5-10 yards from the line of scrimmage. This usually results in Cooper pancaking and planting his opponents with force. He is clearly not the kind of player you want to anger on the field.

A few critiques I would have on his film are some instances of high pad level, but for the most part, he has very good technique - especially considering he's a 16 year old player. This means he has a huge chance to improve at a high rate over the long run.

Cooper is not facing scrubs either. Sometimes with the offensive lineman at smaller schools, its fair to worry about the level of competition he plays against. This is not the case. The Sangamo Conference is very strong in  the Springfield area. The conference has powerhouses like Williamsville who is the defending 3A state champion and Maroa-Forsyth who has had its share of big gridiron success over the last several decades. This conference is legitimate and a force to be reckoned with amongst 3A schools. Clearly, level of competition is no issue for Cooper. I believe that Cooper is a strong side tackle at the next level and will be a power 5 football player before his recruiting is all said and done.

Based on discussions with Starks, I like Illinois chances with a kid like Cooper if they were to offer him. I believe that in a situation similar to current Illini star Guard Alex Palczewski, Cooper could be an under the radar pickup for the Illini and Bart Miller. The odds are the staff would be very happy about having Starks in the future, as they continue to build depth for an offensive line that likely loses 3 starters after the upcoming 2021 season.