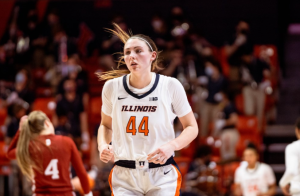 Kendall Bostic has been one of the brightest stars for this season's Fighting Illini women's basketball team.  Joining the squad as a transfer from Michigan State last spring, she's been the team's most aggressive rebounder with a Big Ten-leading average of 11.7 per game.

Kendall enjoyed an illustrious high school career, that included leading Kokomo's Northwestern High School to a pair of Indiana state championships.  I caught up with the 6'2" sophomore after a recent game to ask her how it's been playing for the Orange and Blue:

LS: How's your experience been here at Illinois so far?

KB: It's been great.  You know, the coaching staff, the players - they welcomed me with open arms when I first came here and the adjustment was super smooth. I love all the girls, the coaches.  You know, the culture that coach Fahey is building here and we as a team have adapted.  It's been a lot different than past teams that I've been on so it's very nice to be able to be able to know that each of these girls like has my back in every way possible and I have their back, so it's been a really good adjustment. I love it here!

LS: Was Illinois one of the teams you considered coming out of high school?

KB: They were one of my top schools I considered, so yeah so I kind of knew coming out like where I wanted to go and I really talked with Illinois and they kind of really showed me like what they were going to use me.  They actually had film from my game against them at Michigan State and they were like 'this is what we see you doing'; they had like statistics all this stuff. So it was really cool to see how much time they put in to watch it like to try and get me back even though I like I hadn't committed there yet. So it was really neat to see like the devotion and stuff already.  You know, they were super pumped. And once I got off that first FaceTime I was like I think this is where I'm gonna go.  So I think I definitely made the right choice.

KB: Just how I'm being used. I really am like a stretch four. I like operating high post, you know, being able to post up, get my opportunities short corner; those kind of things. So I think with Illinois, they really give me more of an opportunity to kind of play my style. Obviously, fours are out on the wing a little bit more so I've adjusted to that through college but being able to you know in our zone play the high post you know, scoot out to the corner a little bit like I did tonight. Being able to post up as an option, so I have more options to play like the game I'm most comfortable with I guess that was kind of the main thing.

LS: You guys have a lot of talent out here. What are you missing right now?  I think this team is better than your record would indicate.

KB: You know, we are a new team and we have six new people - three transfers and three freshmen. So I think that's obviously going to take some time in itself to adjust, you know. We have two freshmen running point, so that's a big step for them. But I think our toughness, you know, we talk about all these things in practice, we go over scouting plays all this stuff, and it's like we're struggling to transfer it onto the court during the game.  So in practice we do a great job; we box out, we run the plays, we deny the right way, but we get into the game and everyone kind of gets a deer and a headlight look and then doesn't do what they're supposed to do like tonight. You know, our coaches talk about boxing out for the last four days of practice and we go out in the first half you know, they get 21 offensive boards on us and you can't win a game when other teams getting tons of offensive boards in the first half. So I think just kind of transferring things over from practice to games and just toughness in general. You know, they got a lot of the 50/50 balls and you know there was one time our coach said that there were three of us under the basket and this girl from the other team dove on the floor and got the rebound. So I think we've just got to mentally get tougher.

LS: What's it like to get a chance to play under Coach Fahey?

KB: I love playing under Coach Fahey. She's a great coach. She pushes us really hard in practice and in the games, but she obviously like wants what's best for us. I've never had a coach be like so in tune with her players; like she actually genuinely cares about us off the court as much she does on and so that's something I really like. If we know that she cares about us, we're gonna do everything we can for her but we've just got to do I think a little bit more for coach. I love playing for her.

LS: Awesome! Tell us something we don't know about Kendall Bostic.

KB: I really like tennis and volleyball. I did three sports for two years in high school and then eventually got down to one my senior year when I focused on basketball.

LS: Excellent.  You may know that the IlliniGuys are all diehard pizza fans.  What's your favorite pizza place?

KB: We have this place back in Kokomo called Bruno's.  Gotta be pepperoni!

LS:  Pepperoni, it is!  You and me both!  Kendall, thanks so much for your time.  Congrats on your success and we look forward to big things with you and the Illini.

KB: Thank you so much for having me.