GAME PREVIEW: Why the Philosophies of Illinois’ Bret Bielema & Nebraska’s Scott Frost Could Meet in the Middle Saturday

Fans might be surprised to see Frost’s offense slow down to avoid mistakes but Bielema might showcase a more wide-open attack than he’s known for.

Betting Line: Nebraska by 7. Nebraska has played 14 games in August in program history, and the Huskers are 14-0 in those contests. Nebraska is 2-0 when facing a conference opponent in

Series notes: Nebraska leads the all-time series 13-4-1. Last season, Illinois defeated Nebraska 41-23 to snap a four-game losing streak to the Cornhuskers. The victory was the first at Nebraska since 1924.Illinois is attempting to beat Nebraska in consecutive seasons for the first time since 1923 (W, 24-7 in Champaign) and 1924 (W, 9-6 in Lincoln).

CHAMPAIGN, Ill. -- Just a few years ago, the philosophical differences of the leaders on the Illinois and Nebraska sidelines would’ve felt like the opposite ends of a political spectrum. 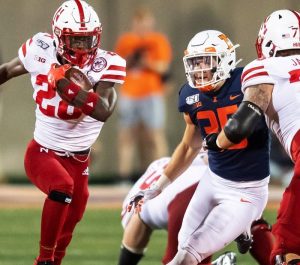 Nebraska’s head coach Scott Frost has always wanted to be the personification of the Ricky Bobby style of the Big Ten Conference: I Wanna Go Fast. The way Frost’s offenses ran at Oregon when he was the offensive coordinator and when he was in charge of everything at Central Florida rarely substituted and tempo more than sophistication was how they consistently moved the chains and found the end zone.

Illinois head coach Bret Bielema, based on his style of play as the leader of Wisconsin and Arkansas, is the living embodiment of what he still calls today “'live, old American football” where you control the ball, take your time, run inside the tackles with big formations and of course, huddle up as much as possible.

If both men were stubbornly insistent on keeping everything the same, what everybody would be in store for Saturday inside Champaign’s Memorial Stadium would be a contrast of thinking resembling the American football version of locking religious right and registered ACLU members in a room for a few hours.

However, leading into this 2021 opener that will represent college football’s first matchup between two Power Five Conference opponents, Frost and Bielema have both shown signs verbally and on limited film to adapt their schemes closer to the proverbial center. What was a class of styles has quickly turned into a meeting in the middle between two men who weren’t known years ago for compromise and finding an intellectual neutral zone.

Following three years where he’s won just 12 of 32 games at his alma mater and just nine of 26 Big Ten contests, Frost may be showing signs he’s willing to slow down his offensive tempo in an effort to find more efficiency. In 2017, Frost’s UCF offense, which led the way toward a 13-0 season and a Peach Bowl win over Auburn, was second among 130 Football Bowl Subdivision programs in yards per play and tops in scoring. The Knights pushed the tempo right up the edge with a run-pass option scheme, rarely substituted and spread out defenses with four and sometimes even five wide receivers on the perimeter.

This led Frost to debut this arrogant statement in his introductory media conference at Nebraska.

“I’m hoping the Big Ten has to modify their system to us,” Frost said.

Following three seasons at Nebraska against physically aggressive Big Ten defenses, Frost has yet to see his offenses reach higher than fourth in the league in yards per play and have ranked sixth (2018), seventh (2019) and 12th (2020) in scoring. Therefore, Nebraska is adapting to the Big Ten and not the other way around.

“It’s been an interesting few years,” Frost said earlier this month before the opening of Nebraska’s preseason camp. “In some ways, I think we’ve done a lot of things right. In other ways, there were some things that we needed to get into the league to learn.”

For the Cornhuskers to turn around the results, they’ll need to flip the mistake-laden football they’ve been playing in recent years and that puts the spotlight on third-year starter Adrian Martinez at quarterback.

Martinez’ freshman season was an encouraging start as he racked up 2,617 yards passing with 17 touchdowns and eight interceptions. He completed 64 percent of his passes that season. Martinez went through a sophomore slump in 2019 where had 1,956 yards passing with 10 touchdowns, nine interceptions and his completion percentage dipped to 59 percent.

“I couldn’t be more excited for Adrian than I am right now,” Frost said. “I’ve walked in his shoes before. Adrian came in and earned the job as an 18-year-old and had a phenomenal freshman season. I think he would tell you he wasn’t as satisfied with his sophomore season as he would have liked to have been. Some of that was his fault. Some of that was our fault as a coaching staff and the other people around him.”

Bret Bielema has voiced the presentation of a man who is more than willing to adapt his grind-it-out style of football to the modern offense world of 2021. After three years in the National Football League where he was able to keep his eye on college football as simply an educated observer, Bielema’s Illini showcased some no-huddle principles, shotgun looks and tempo pace in the spring game just a few months ago.

While winning three straight Big Ten Conference titles and compiling a 68-24 record in seven seasons at Wisconsin, Bielema was known for a compact, power running game that was supplemented by a play-action pass game as a secondary option. In one of his first television interviews since agreeing to become the 26th head football coach in Illini football history, Bielema suggested fans shouldn’t presume that the grind-out style that made him famous in the past will resurface in Champaign-Urbana.

“The part that people automatically jump to is hey, this is what he did in the past,” Bielema said. “As coaches, we all evolve. I was a head coach for 12 years and witnessed some good things at the programs I was at but you gotta be aware in college football, it always evolves through the rules and the way society evolves in general.”

One of the four on-air BTN talents who heard Bielema say these words was full-time analyst and former Illinois tailback Howard Griffith. Griffith, who set the NCAA record for touchdowns in a game with eight in 1990, said he believes the 2020 version of Bielema that the Illini are getting doesn’t completely resemble the version that began his head coaching career in 2006 or even the one who was terminated at Arkansas in 2017.

"Bret Bielema’s adaptation as a football coach is, I believe, coming from a place that recognizes he’s a different person entirely,” Griffith said.

Saturday’s result may be a representation of which of the two men can adapt their past into the present of what college football is now during a critical 60-minute, eason-opening game for both programs.

“I would like for the things that we've seen during practice to be the same things we see on the field Saturday, right?" Bielema said Thursday. "So we talk a lot about a tough, smart, dependable team — teams don't beat themselves, right? We want to be able to play ahead of the chains offensively, be physical on defense and capitalize on big moments. So, hopefully, the things we've been preaching to our guys are the things that show up on Saturday.”